The original slot machines were very unsophisticated. They mainly consisted of three reels, and just one row of symbols would be displayed at any one time. This amounted to a single payline. Land yourself three of the same fruit, and you got a nice prize. Since then, slots have become rather more complex. That's particularly so with the introduction of video slots came in. Let's have a look at the rather more modern Dark Knight Rises slot, for example. 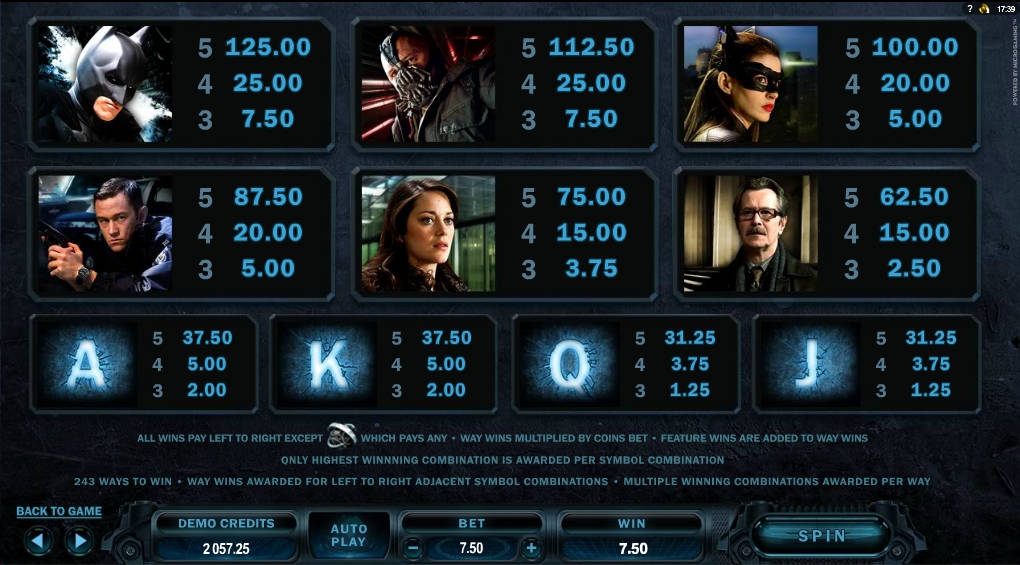 Here's the paytable. We can see from this that we would win £7.50 if we spun three Batman symbols. Four Batmans would get us £25, and five of them would net us a cool £125. We can also see that the symbols for Bane (for those unfamiliar with the film, Bane is the chap wearing the breathing equipment) would score us a slightly different £112.50 jackpot for five. The Catwoman symbols would earn less again - £5 for three, stretching to £100 for five symbols. Three other characters would win us much smaller sums, while the Ace, King, Queen and Jack symbols would scoop only paltry amounts - the Queen or Jack would notch up just £1.25 for three, and £31.25 for five, for instance.

Note that combos will generally start counting from the first reel only. So three of the same symbol on the 1st, 2nd and 3rd reels would win you a big prize. Spinning the same three symbols on the 3rd, 4th and 5th reels, though, would generally result in no win at all. This is what we mean when we talk about a slot paying from Left to Right. Some slots, though, can pay from Right to Left, so you would start counting backwards from the 5th reel. Other slots will pay both left to right and right to left, giving you a large variety of different possible combos.

So exactly which combos add up to a win? And how do we arrive at a figure of 243 different combos for The Dark Knight Rises?

Well, 'Classic' video slots are relatively simplistic. The first ones had a 3 x 3 grid, and the simplest of those had just one payline - the middle row. Subsequent versions would count lines of matching symbols on any of the three rows, as well as diagonal lines, starting either in the top left or the bottom left corner. That added up to as many as five paylines.

Inevitably, with time, the range of possible paylines became more complex. Look at this set of combinations for the 25-line Big Bad Wolf: 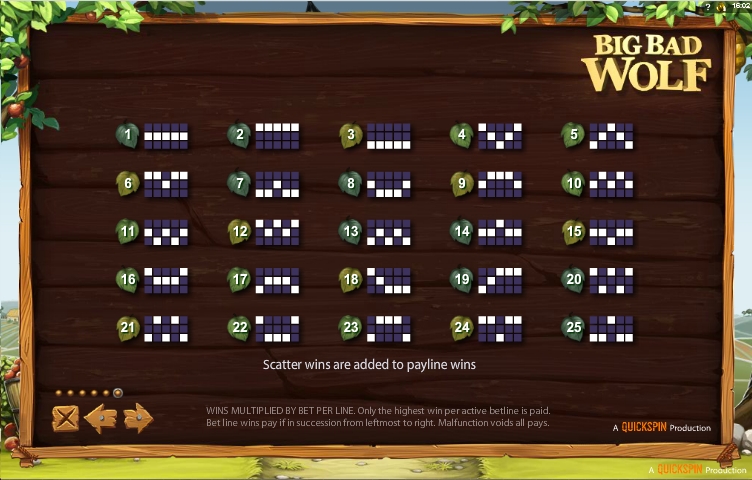 There are the usual straight and diagonal paylines. But you also have a range of entirely different combinations that zigzag across multiple rows.

Ways To Win or All Pays Slots

What with all of these possible paylines or combos, it was getting extremely difficult to keep track of winning combos. So 'Ways To Win' (or 'All Pays') slots, like The Dark Knight Rises, came along to simplify things. 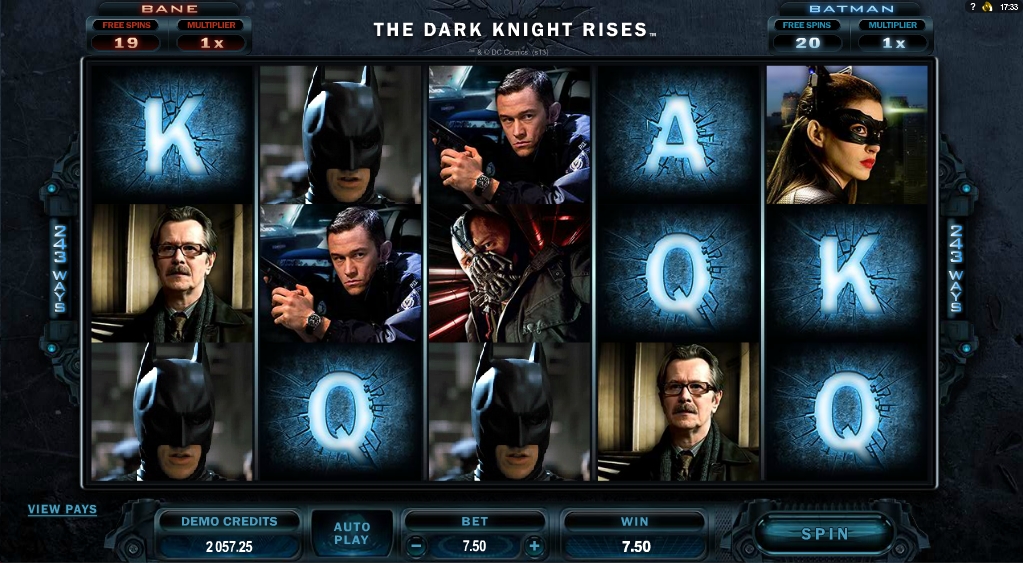 You can see that we've spun three Batman symbols. The first one is on the bottom row of the 1st reel. We also have a Batman on the top row of the 2nd reel, and the last in our sequence is back on the bottom row on the 3rd reel. In fact, it doesn't really matter where the three symbols are, as long as there's one on the 1st reel, the 2nd reel, the 3rd reel etc. They'll all be winning combos, allowing us to win £7.50

Calculating your exact bet can be slightly complex. The 'Line Bet' will consist of two components - Coin Size, and the Number of Coins. You multiply these together to calculate the Line Bet.

Once you have your Line Bet, you'll often have to multiply it by the Number of Lines in order to generate the Total Bet. The Number of Lines, though, is frequently fixed and won't be alterable by you. In fairness, that's possibly so that it doesn't confuse punters, who have have a habit of decreasing the Lines while looking to cut their bet size. However, the fewer Lines you're paying for, the lower will be the number of potential winning combos. Unwary punters can drop this setting to its lowest number, and then wonder why they hardly ever seem to form good combos.

As you sit down to play a new slot, do make sure you're getting the number of lines that you want. And know what the winning amounts will be before you start.