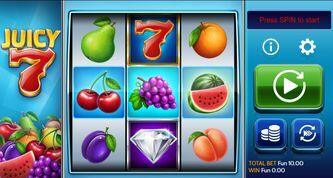 Play and explore the Juicy 7 slot for its retro reel action on 27 ways to win and a maximum possible payout of 800x on the line bet.

Retro slots come in many different packages. Some are wrapped in the standard five reels and three rows and these are usually given a contemporary twist on the symbols and the gameplay. Others appear in the simplicity of the unmistakable three by three grid, with a varying number of paylines, usually starting at one and including up to five, and in some cases nine.

Here we have the Juicy 7 slot, which is as retro as they get, however, the slot design and the overall look and feel of the gameplay makes this game stand out from the rest. Then there are the bonus features which contributed to the gaming experience. Unlike so many other retro slots, Juicy 7 has a bonus feature of the diamond appearing at least once on every reel and creating multiplying values for the winning bet when there are more such symbols on the reels.

Another crucial details that no one would think of until viewing the paytable is that Juicy 7 slots makes out the pays through the consecutive reels way and in as many as 27 ways to pay.

How to Play Juicy 7 Slot

Setting up for what comes with the gameplay is but a trifle. It really takes just few clicks to select the size of the wager per spin, since the paylines are always active with the consecutive reels style of play. As for the bet, the coin size can be selected from the button that displays a stack of coins. The smallest coin size is one penny and the biggest coin size is 1. The spin button cannot be missed, as it is a huge green rectangle with the play sign circumscribed by an arrow-pointed line.

The paytable is also there, accessed from the 'i' button that is located above the spin button. The paytable is the place where players can discover the symbol pays and details about the bonus features, besides this we get information about the 27 paylines, the symbol pays and the top payout of Juicy 7 slot, which occurs with all of the diamonds covering the reel-set, for a whopping sum that we'll divulge in the next over section.

Two additional buttons have their part in the gameplay. The Turbo mode is toggled on from the corresponding button in the settings menu. This causes the reels to turn really fast, so much so that they don't turn at all. The autospin button is located next to the spin, and with this option the player can set up to 100 automatic spins on Juicy 7.

The game's design is simple but pleasant and all of the symbols are fruits that come from the classical slots. The players will encounter the assortment of an entire fruit stand: lemon, apple, pear, orange, plum, peach, cherries, however the most important and valuable symbols are the sevens and the diamond.

How to Win Juicy 7 Slots

The game has few symbols that can deliver impressive wins for a slot of this category. The Juicy 7 slots symbol delivers a prize of 60 when three occur on consecutive reels. The cherries also deliver a decent price of 25 when three land on the reels, however, the most valuable symbol is the diamond.

If the diamond appears at least one time on the reels during any spin, the player wins the sum of all random values for each diamond visible on the grid. The total prize is 800x on the total bet, while the biggest possible win comes when nine diamonds land on the grid.

Anyone who wants to take some time off of those full-blown 3D slots that cause explosions and put up entire cinematic sequences on the screen, is welcome to try Juicy 7. This plain yet engaging game is always available to those players who can appreciate  retro slot machine, much akin those of the casino floors across Vegas.

To explore the Juicy 7 slots you can start right from this page by claiming the welcome bonus.