We have a four jackpot slot game in the Enchanted Eyes: Big Hit Bonanza, which plays on three rows, five reels and 25 always active paylines. The bets start at £1.00 per spin, owing to this being a jackpot slot, while the maximum bet is at £40.00. The way to the jackpot prize is by collecting 15 scatter symbols in the bonus feature, towards the top payout prize of 30,000. The game's theoretical player has been set at 94.20% which is just all right for a jackpot slot game. 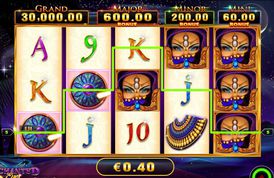 Play for a chance to win one of the four jackpots and the base game prizes on the Enchanted Eyes Big Hit Bonanza slot by Ainsworth.

A Big Hit Bonanza can happen through a pair of Enchanted Eyes. This is the story behind a slot game made by the experts at Ainsworth. Everything takes place on a reel-set of three rows and five reels and across 25 paylines. By all looks of it, this is an Ancient Egypt themed game but with a major difference: unlike nearly any other slot of the same theme, this one doesn't celebrate deities, nor a pharaoh, nor the look and feel of the insides of the pyramids. The Enchanted Eyes Big Hit Bonanza slot is all about a woman who is an enchantress and whose presence on the reels may trigger some quite lucrative winnings.

The players will discover a wild symbol in the picture of the enchanting princess and there is a bonus symbol which is the same like the wild, triggering the Princess Bonus. And last but not least, the sun-tipped pyramid is the scatter, scattering the winnings in any way to pay. What is more, the Enchanted Eyes Big Hit Bonanza slot has four jackpot prizes: Mini, Minor, Major and Grand, all of which offer the same amount at all times, regardless if a player has previously made a big score.

So we see that this is an Egypt themed slot with lots of pleasant surprises for the lucky players out there. What comes next before trying the game for real money are insights that will help the players set up for the gameplay and enjoy it.

The reel-set is the home to the reel action and just below it are the controls. Since the 25 paylines are always active, the only thing that needs setting up is the bet per spin. This is done through the window located below the reels and there are only two arrows there that are put to use for the selection of the bet. The smallest available amount is £1.00 and the biggest amount is £40.

Now this is a little bit unusual because the biggest bet is not some high-stakes sum, while the basic bet is rather high befcause it starts at £1.00 without offering any smaller amounts. On the other hand, this is quite understandable because we are talking here about a slot game that has four jackpot prizes, with a top one of a whopping 30,000 coins multiplied by the line bet, which when you split a pound by 25 lines, you have 30,000 multiplied by £0.04, and that amounts to a neat £1400 with bets of just a pound.

To set the reels spinning all you need to do is push the spin button located in the bottom right corner of the playing surface. You will notice it is a green circle surrounding the A letter which stands for the company's name: Ainsworth. There is another useful option when it comes to the spin, and that is the autospin. This lets the players specify a number of atomic spins, so there is no need to hover around the game while it's working the reels and paylines.

The dynamic paytable displays all of the symbol pays in pounds or euros or your online casino's preferred currency. The most valuable symbol in the game is a display of a lotus flower that branches out and is covered by a golden top. If played and won on the maximum wager of £40.00, the top prize for this symbol amounts to £320.00 for a string of five symbols.

But what is amazing about the Enchanted Eyes Big Hit Bonanza slot is that there are few symbols of the same value. The next one pays also £320 and it is the deep-blue and purple brooch. The golden-winged scarab, the Eye of Horus amulet and the necklace all pay £240 when they combine in five symbols on a payline. But now it's time for the big caveat - these amounts become doubled during the Big Hit bonus feature! So the top paying symbol amounts to £640.00.

The Big Hit Feature is triggered during the base game whenever six or more of the scatter symbols will appear anywhere on the reels. In the event, the player gets three free spins and each scatter that has appeared will award either one or two free spins - these are taken on aggregate, however these can be retriggered. What is more, the scatter symbol is given a random number from 1 all the way to 50 and that number is multiplied by the triggering bet.

The bonus game is triggered when the princess and princess bonus symbols appear on the middle three reels. If 9 or 9 such symbols appear, the player gets the Major bonus. As for the grand prize. Collecting 15 scatters during the Big Hit Feature will result in that cash prize, or it could also happen at random during the base game.

Play the Enchanted Eyes Big Hit Bonanza slot when you discover the game at one of the casinos. Start by claiming the welcome bonus right from this page.