Golden Wisdom Golden Cash comes on five reels and offers 25 always-active paylines that can trigger a free spins bonus, the golden peach respins, and a chance at one of the three jackpot prizes, of which 30,000 is a top payout. A wild substitutes for any except the bonus symbols and two high paying symbols provide 8x on the bet for the optimal win in the base game. 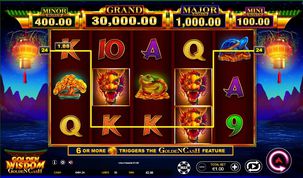 Play the Golden Wisdom Golden Cash slot for a chance to win one of the jackpots, where the most lucrative one is £30,000.

Contemplate a set of Chinese traditional symbols and acquire the timeless wisdom about fortune, luck and money.

Golden Wisdom Golden Cash slot is a jackpot game developed by the slots experts at Ainsworth. They have created a reel adventure with three rows and five reels that spin across 25 always active paylines.

The players can get all of the jackpot slot action with bets that start at  one pound, a high smaller bet,  but one that can potentially trigger one of the jackpot prizes.

Ainsworth have opted for another theme set in Ancient China and somehow it makes for a perfect setting for jackpot slots. The reel adventure offers a free spins bonus, a wild that substitutes and the Golden Cash feature.

A dynamic paytable displays all of the potential win amounts in cash, according to the bet, and that is an invitation to take a peek at the possibilities that could arise with playing the game.

The players will discover a moderate quality in terms of engagement through the graphic design, yet, Golden Wisdom Golden Cash slots has a dynamic gameplay.

There aren't any reel modifiers and we couldn't expect any such given it is a jackpot game. Still, the wild does justice to all the symbols but it is the Golden Cash feature which is triggered by the golden peach symbol that can make the most of the base game.

The picture symbols do spring to life when they become part of a winning outcome. The dragon is especially entertaining to witness, as it is the wild and a wild multiplier. All of the symbols are treated to a modest light show when they form a win.

A musical theme is there to keep you company among all the gold and jade symbols, as it is one of a light mood that can be left to flow in the background.

The layout is typical for almost all of the Ainsworth slots machines that have been converted into online slots. The controls can be found in the bottom of the screen.

Start the reel action by pressing the Spin button once for each spin and this will deduct once the selected bet.

To the left of Spin is the autoplay button. Those players who prefer to have their online slots play on automatic spins can opt for this option by selecting one of the presets.

The Golden Wisdom Golden Cash slot has a range of bets that start at one pound per spin. Choose your amount from the window that states Total Bet. The biggest bet is £40.00 per spin, but there are multiple bets that can be selected.

Those who want to view the symbol pays can access the paytable from the bottom left corner of the screen. The 'i' button opens up that part of the game, while the settings cog symbol to the right of it can augment some non-gameplay settings.

This jackpot slot has the Golden Money feature which brings extra cash to the lucky players who get to see the feature trigger.

One of the most lucrative symbols is the Free Games scatter which pays for three, four or five symbol wins anywhere on the reel-set. The topmost prize is 10x on the bet.

The Golden Peach symbol doesn't pay any on its own, but it carries prize amounts when it triggers the feature from above.

As it is the case in Chinese tradition, the pig counts for an auspicious animal, so its symbol pays 8x on the winning bet. One thing to note is that this symbol also pays for two symbols only, as long as these start from the leftmost reel.

The money frog symbol, another one related to luck and fortune, pays 8x on the win also. The turtle, trout and the money tree pay 6x.

The Golden Wisdom Golden Cash slots Wild symbol doesn't pay any but it substitutes for all, except the special symbols.

The Golden Cash game is triggered when six or more golden peaches fall anywhere on the screen. Like in nearly all jackpot slots that offer this bonus game, the players get three respins. Each time a peach stops on the reel-set the player gets a respin added. Those golden peaches that stop on the reels will remain in place while the rest of the positions go for the respin. The most exciting feature in this game are the added cash prizes. Each peach symbol can carry up to 50x value which are counted on aggregate and multiplied by the triggering bet.

The ultimate prize is awarded when the reel-set is filled to the last with by the golden peach symbol during the Golden Cash game but this can also occur in the base game, if the peaches canvas the entire reel-set.

Ainsworth have offered many of their previous slots as a free play demo, however this game is aimed at the casino floor, as well as for the online casino, so it remains to be seen whether the players will have a chance to test-ride it.

There is a grand jackpot of £30,000 which can be won with the highest bet, which isn’t awfully high at only £40.00. Being aware this is a jackpot slots to the T, players should know that base game wins aren’t going to impress. On the other hand, the Golden Cash part of the gameplay could.