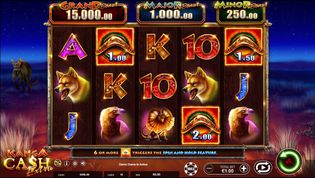 Head out to the Australian bush for a night sky's view of the stars and perhaps a glimpse of an of the creatures on the horizon. Kanga Cash Extra slot takes you on an adventure of base-game action that can produce a bonus cash game and a free spins feature, besides a potential jackpot prize.

Center place in the game at hand is given to the kangaroo, hence the name. This symbol represents the game's scatter symbol but also the two symbols that can get you either the Major or the Grand jackpot prizes. The base-game is packed with action which unfolds on a reel set of three rows and five reels.

Another feature are the boomerang symbols which come attached with cash prizes that are relative to the bet. These symbols can boost the winnings from any given spin if they fall on a payline. As we can see, Ainsworth are carrying on with the prize coin feature and three-tier jackpot prizes in this game too, just like in the Sweet Chilli Electric Cash slot.

Ainsworth have made an online and land casino slot that has notably better graphics than Sweet Chilli. The drawing and rendering of the animals matches the overall look and feel, so the players who are into wild animal-themed slots will feel at home with Kanga Cash Extra slots.

Winning outcomes are marked with the reels becoming dark and only the winning symbols highlighted from the rest. The animal symbols perform a movement to mark the occasion but nothing spectacular, so in that regard the visual effects are plain and simple.

The background offers a look towards the Australian expanse while the stars blink and glimmer in the sky. Overall, a decent gaming experience.

Start the game by first selecting your wager. This is done from the Total Bet button in the bottom right corner of the screen. The range of bets starts at 1.00 and ends at 20.00 per spin. Any bet plays across the game's ten always-active paylines.

Regardless of the bet amount, the grand, major and minor pots retain their amounts, however the change does reflect on the boomegang symbols, as these carry prizes that are relative to the triggering bet.

To send the reels spinning press the Spin button once. This is going to deduct the bet amount once. If you want the Kanga Cash Extra slot to play hands free you can press the autoplay button that is to the left of Spin, and select a number from the automatic spins presets, between 10 and 100.

In case you are wondering why Kanga Cash Extra has such a high minimum bet, it is because it's a jackpot slot. Yes, this is much higher than most slots which start their bets anywhere between ten and quarter pennies, but on the other hand, you get a whole ten pennies multiplier on the payline in case of a win, when playing 1.00 per spin.

Winning outcomes in the game at hand are made with three matching symbols, or more, which must start on the left reel and fall on any one or more of the ten paylines.

The most valuable symbol is the buzzard, paying 30x multiplied by the winning bet. Unlike in some other Ainsworth slots, like Twice the Diamonds and Sweet Chilli, here we don't have a scatter symbol that pays for three or more.

At any rate, the dingo and the dragon lizard are the remaining picture symbols in Kanga Cash Extra slot, and they pay 25x on the winning bet.

The wild is a substitute and the boomerang triggers a free spins bonus and pays a cash prize. When three fall on a payline, the amounts are added and paid on the triggering bet.

The same symbol also triggers five free spins for any payline with three or more of these symbols. The bonus can retrigger.

The sunset symbol triggers the Spin and Hold feature which carries only these symbols which carry a coin value. Each one stopping on the reels resets the respins at three. In the end, a reel-set filled with sunset symbols grants the Grand Bonus. 14 of these award 40x on the winning bet, 12 to 13 pay 25x and so on, with the minimum of five or six paying 5x on the winning bet.

The grand jackpot can also trigger during the base game, if the reel set is covered with the sunset symbol. During the Hold and Spin, the sunset symbol carrying the mark of a Minor or Major jackpots triggers that prize.

Ainsworth have released this game as a free play demo, which allows the players to try and decide whether to play with real money.

The game at hand is very similar to most games by this company however, compared to the rest, the payouts here are much better. Take their other two games that we mentioned in this review and you will see the difference.

Discover the Kanga Cash Extra slots by claiming a welcome offer right from this page and play at top notch online casinos.