Mr. Driller has three jackpots that don't require a sequence of few events to trigger, but can fall from the mere stopping of a single corresponding symbol. Other exciting moments come with the expanding wild symbol and the few other reel modifiers. All plays out on 50 paylines that spin on three rows and five reels towards a top payout of 2000x on the bet. 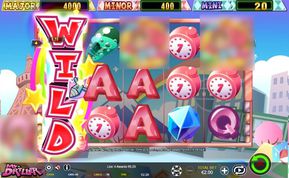 Play the arcade game based Mr. Driller slot, for a chance to win the topmost prize of 2000x multiplied by the winning bet.

Ainsworth are the slots experts behind a jackpot slot game that they based on a video game of a certain popularity, called Mr. Driller slot. The theme involves two cartoonish characters whose objective in the video game was to drill down a Tetris-like landscape. Most of the game's elements have been captured in the game design and there are some references to it in the extras.

A reel-set of three rows and five reels spins across 50 paylines which are always active. There are three extras that can impact the reels in the base game and four in-game jackpot prizes, whose prizes are relative to the triggering bet. Wins can be made with a minimum of three symbols which must fall on the leftmost reel.

The layout and symbols have lots of candy colors, which is in line with the original game that inspired the Mr. Driller slot.

All of the picture symbols correspond to characters from the game and the slots experts at Ainsworth have treated them accordingly by adding animation. So each time a win occurs the pup and the boy (ataru) and girl characters, as well as the Hollinger-Z robot are part of a win, these symbols spring to life.

Mr. Driller has a range of sound effects that are very much like an arcade game. Some thuds, jingles and bells ringing accentuate the events on the reel set. Some music exists too when the bonus feature is triggered.

How to Play Mr. Driller Slot

Your adventure on the reels of this online slot can begin once you have selected a wager. This is a jackpot slot that has three instant prizes in-game. These rise in value depending on the bet that triggers them, so it is no wonder that the smallest bet starts at a rather high £2.00 per spin.

The bets can be selected from the bottom right corner of the screen in the field labeled Total Bet. The maximum in Mr. Driller slot is £10.00 per spin and that warrants a major jackpot that justifies a high-stakes reel action.

To send the reels spinning press the round and greed Spin button in the far right bottom corner. To the left is the autoplay button which opens up a box that offers a sliding scale for the number of automatic spins. Select the number and press Spin.

On the left side of the screen are three buttons. The cog displays the payline bet amounts, which reflect on the Total Bet amount. The speaker button toggles the sound on and off and the 'i' stands for Information and displays the paytable with all of the symbol payouts and additional gameplay details.

How to Win Mr. Driller Slots

Three matching symbols form a win and there can be more than one resulting form a single spin. After all, there are 50 paylines that are always active on this game and we also have to take into consideration the wild which expands on a full reel.

That being said, the most lucrative wins in Mr. Driller slots are paid with the picture symbols, however these are rather meager amounts. On a 2.00 bet five wilds pay only triple on that amount. The Ataru and Holinger-Z symbols, which follow in terms of value pay only double.

This is to conclude one thing. It is the wild that can work magic on the reel-set and the 50 paylines, hence, this is why the small payouts are justified, or shall we say, balanced out.

One of the three bonus games are triggered when three scatter symbols stop on the reels. This symbol only occurs on the odd-numbered reels. In the event a drum rolls and stops on one of the features.

Robo Multiplier awards a multiplier on the triggering bet amount.

Break the Block results in a block of symbols being knocked down in three stages, leading to a win.

Extra Chance triggers a roulette wheel which can trigger one of the jackpot prizes or another cash prize.

The Mystery Prize feature is triggered at random in the base game and that results in one of the jackpots paid out.

A free play demo slot is available, courtesy of Ainsworth and of all of the casinos that host demos and slots in practice mode so that the players can try before playing.

We have a hidden gem of an in-game progressive slot. The symbol payouts aren’t impressive but the wild can work its magic. The difference between big and small payouts can be made by the bonus rounds and how often or how far in between they trigger.