South Of The Border Slot

In addition to base game wins, there is the cash collect game in South of the Border slot that was also part of Sweet Chilly Electric Cash, but this time it is slightly different and, it appears, more generous thanks to it triggering with five instead of six sun scatters. The top payout in this game is the jackpot prize of 30,000. 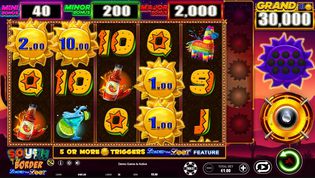 South Of The Border Slot Online

It looks like the slots experts at Ainsworth had developed a taste for Mexican food, or margaritas, or maybe even straight up mescal, because they quicky followed up on their Sweet Chilli Electric Cash slot. The game that is meant to carry on the former's legacy is called South of the Border slot and comes with four jackpot levels.

South of the Border Introduction

The layout is three rows and five reels that spin across 25 alwyas active paylines. As per the usual for this setup, wins are made with three, four and five of a kind symbols.

Those who are looking for an exciting reel adventure are going to find even more stuff to do South of the Borner, as the game has more than just one scatter symbol and the wild symbol can form stacks of three on a reel.

South of the Border Design Features

The design team at Ainsworth nails it every time when they opt for this theme, which can mean stereotypical symbols that can be seen across any reel adventure that is taking place in Mexico. The symbols are margarita glasses, bottles of hot sauce, pinatas, cacti and a set of card symbols that are patterned like sauced tacos.

Despite the 'seen-it' moment, all of this is quite alright and appealing to an extent, as Mexico-themed slots are always cheerful. The guitar track does its thing to bring out the good spirit, so South of Border slots can not disappoint on any level.

How to Play South of the Border Slot

Get ready for your tequila sunrise by first selecting the cost of the bet. This can be done by working the minus and plus buttons in the Total Bet window at the bottom of the screen. Perhaps not surprisingly, the smallest bet that you can place against the game is one pound, which isn't a small amount, but then the game has four jackpot levels.

To make the reels spin press the round button with Ainsworth's logo inscribed inside. To engage the game in the autoplay mode press the button to the left and use the slider to select the number of free spins. Additional options include setting a loss limit and a total win limit. The number of automatic spins is limited to 25 and the loss limit is limited to the cost of the bet times 25.

There are four jackpot tiers and each amount is displayed above the reels. The Mini Bonus is worth 40x, the Minor Bonus 200x, Major Bonus 2000x and the Grand Jackpot pays a rather voluptuous 30,000x. The standard symbol payouts can be seen from the paytable which can be accessed when you select the 'i' button at the bottom of the screen.

The MAX button ups the bet all the way tot he maximum, which in South of the Border slot is £40.00 per spin.

How to Win South of the Border Slots

Winning the game requires at least three matching symbols. One exception is the dancing cactus symbol which can pay with two of a kind, albeit a very small prize.

There is a wild symbol that substitutes for any, except all of the scatters that can appear on the reels. The wild is the cheerful Mexican mariachi.

Most valuable symbol in South of the Border slot is the scatter symbol. It pays 100x multiplied by the bet for five matching symbols, 10x for four and 2x for three. This symbol doesn't need to appear on any of the 25 paylines in order to trigger a winning outcome.

The cactus pays 6x multiplied by the bet for five symbols, the hot sauce pays 5x, the margarita glass pays 4x and so does the pinata.

South of the Border Bonus Features

The bonus is related to the sun symbol which comes with a cash prize attached on it that is relative to the bet. You need five of these symbols to appear scattered on the screen in order to collect the cash prize and trigger the bonus game.

When the sun symbol triggers the bonus, players get four free spins. The triggering symbols remain in place while the rest of the reel-set is cleared of the regular symbols and can only return the sun symbols and the +1, +2 and +3 Free Games symbols attached to the suns, which add that many spins to the tally.

The sun-meter on the right will add one sun for each one that stops on the reels. The game pays the Grand Jackpot when there are ten sun symbols on the reels.

South of the Border Free Play

Ainsworth have gladly released the game as a free play demo slot, so that the players may get a taste of this Mexico-bound jackpot adventure.

South of the Border Closing Thoughts

Perhaps the payouts aren’t that great, but the bonus feature is triggered with five symbols instead of six, which is usual for all online slots. The point of the game is to play for the jackpot prizes. Only a very lucky succession of base-game payouts can earn a sizeable return, so let’s root for those sun symbols.

Discover South of the Border slots by claiming a welcome offer right from this page and play at top rated online casinos.