Ainsworth have made a game of diamonds with a 100x on the bet maximum exposure, which can occur more than once during the game. The chances for a big win come at improved odds during the free spins bonus where multipliers of x2, x4 and x8 can work as wilds and in company with the sticky wilds. Twice the Diamonds has 30 paylines and a theoretical RTP of 96.60% 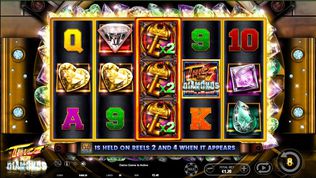 Diamonds are forever, said once someone who isn't a geologist. Diamonds are indeed forever, not only in terms of their durability as matter but also because of their value. The slot at hand places a number of perfect stones inside a vault that spins three rows and five reels across 30 always active paylines.

The theme was marvellously executed by Ainsworth who have many dozen slots under their belt. Twice the Diamonds slot was produced for the land based casinos around the world, however the game has been made available at online casinos too.

Besides the exciting action in the base game, there are extra features that can come up to boost the winning outcomes. Lucky players will see more of the golden keys, which are both substitute symbols and add multipliers on the wins of x2, x4 and x8.  A free spins feature is also available and comes with sticky wilds and multipliers.

The slots experts at Ainsworth have created a fun to play game that makes the best of the diamonds. Winning outcomes present the precious stones in their full splendor. Each of the matching diamonds that stop on a payline are treated to their own light glimmering throughout the body.

The most marvellous part of the design on Twice the Diamonds slots is with the wild symbol. Each time this symbol substitutes in a win, it implodes and morphs into a number of different precious stones that shine and sparkle. This cool effect is topped only by the big wins that are possible in the free spins and in the base game.

Ainsworth have included a sound score and a piece of music to make for a well-rounded gaming machine.

How to Play Twice The Diamonds Slot

To begin your adventure through the vault filled with diamonds, first things first check the default bet to ensure that it isn't some amount that you wouldn't want to spend on your first spin.

Note that this game is quite expensive. The minimum bet is no less than 1,20 per spin and even though the highest bet stops at the sum of £48.00, Twice the Diamonds slot still is a game that many players wouldn't play because of that minimum bet amount.

But if you want to give it a chance and make a number of spins, select your wager from the bottom right area of the screen, by pressing the minus and plus buttons. To make the reels spin once per the active bet press the glowing round arrow in the bottom right corner.

Twice the Diamonds has an autoplay functionality also. To configure this feature of the game press the button that is to the left of 'spin'. A menu opens up that states Set Auto Games where you can use the sliding bar to select automatic spins between 10 and 100. Once read to go, press the green check mark button and watch the game do its thing without your input.

To turn the sound on or off press the speaker button in the very bottom left area. To the left are two more buttons for the settings and the paytable, where you can find information about the bonus features, gameplay and the symbol payouts.

How to Win Twice the Diamond Slots

Payouts in this game are made with three or more matching symbols falling on any one, or more, of the game's total of 30 paylines. Big and bigger wins can be made with the help of all the Wild symbols which not only substitute, but also add multipliers.

In terms of value, the most valuable symbol in Twice the Diamond slot is the scatter, which triggers the bonus feature but also pays a top prize of 100x multiplied by the winning bet.

Next to that symbol is the clear diamond which pays 10x on the bet, which is followed by the heart-shaped 'golden' diamond with the same amount. The square-shaped diamond, the tear-drop and the triangle all pay 5x multiplied by the bet for symbol wins consisting of five of the same.

The bonus feature is triggered with three or more scatter/bonus symbols. Ten spins are granted which can be retriggered. One caveat is that the bonus gets those wild multipliers of up to x8 plus the standard wild symbol. These can 'stick' on the reels, however, the symbol payouts during the feature are comparably smaller, with the scatter symbol paying 50x instead of 100x.

Ainsworth have released the game as a free play demo and it can be found at online casinos that offer demo slots to their players.

The game offers a dynamic adventure along with the sparkling diamonds, which pay amounts that are quite decent for five symbol wins, in the base game. It is another story in the feature. Without the sticky wilds and multipliers, the payouts are rather slim, but with these boosters, they can turn up much better than in the base game.

Discover the Twice the Diamonds slots by claiming a welcome offer right from this page and play at top notch online casinos.