A maximum payout potential of 2400x multiplied by the highest winning bet and a medium variance makes it a curious animal, but just if you are curious about it, make a few rounds and make the decision yourself. 25 fixed paylines spin across three rows and five reels that can turn up a coin collect feature and a free spins bonus. 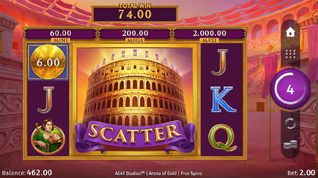 A three-tier in-game progressive jackpot doesn't reach a million in prizes but it certainly can replenish any balance thanks to the 1000x on the triggering bet Maxi prize or a 200x mega prize.

The game at hand comes from the slots experts at All41 Studios, which have previously made online slots exclusively for Microgaming and their Quickfire platform.

In consideration of the overall look and feel and the quality of the experience, Arena of Gold slot doesn't succeed in making an impression on slots players who are used to playing on bombastic productions, jackpot or not.

The game at hand lacks energy and it is mostly because of the lackluster symbols. On the other hand the coin collect and the free spins bonus features are the straw  that can be drawn in deciding whether to play the game or not bother with it.

The designers at the company have made the Roman Colosseum the likely setting for this game.

However, considering the title, they could have oped for the Roman Senate or one of the palaces of Caligula, a nod to his lavish habits. Nevertheless, the game involves gladiators and not horses made senators, so for the symbols we have some rugged men in their gladiator's attire.

The low paying symbols on the Arena of Gold slots are the royal cards and the extra symbols are that of a Roman emperor , the Colosseum building itself and golden medallions for the cash coin symbols. Payouts and win outcomes are marked by some light effects on the reels, but not a whole lot of pep.

How to Play Arena of Gold Slot

Set up this reel adventure by selecting the coins stacks icon, unless you want to play whatever the default bet is, which is shown in the very bottom corner of the screen.

All of the game's buttons can be found on the right-hand side of the reel-set. The spin button is a big, round purple one that you press for a turn on the reels. The autoplay option is there too, just below the spin button.

Autoplay allows you to take on the game hands-free. In other words, you can select from the automatic spins  presets and add some optional stops on this reel adventure. To stop the autoplay press the same button again.

About the range of bets, the Arena of Gold slot offers one that is decently wide, starting at only ten pennies per spin and ending with a maximum of £50.00, which would render the Maxi jackpot a very nice round sum of £50,000.00.

Last, but not least, if you want to check out the game rules, bonus feature information, coin collect feature details and payouts, hit the three-dot symbol, which is for the game's menu.

How to Win Arena of Gold Slots

Winning cash prizes requires three or more matching symbols to fall on any one of the game's paylines. There can be more than a single win per payline. Wins must occur starting on the leftmost reel.

The wild symbol in Arena of Gold slot is represented by the emperor. This symbol pays 20x multiplied by the winning bet and shares the status of most lucrative symbol with the blonde and orange gladiator, also pays 20x for five of the same.

The Roman Colosseum is the game's scatter and bonus symbol. It can fall anywhere on the reel-set in three positions to trigger the free spins bonus. The kicker for the bonus feature is that the three reels in the middle become locked into one and deliver colossal symbols on the reels. The initial number of free spins is five, but this number can retrigger. The scatter symbol can appear as a colossal symbol also.

The other bonus feature is the Golden Re-Spins which are based on the golden medallions. This is a familiar bonus feature that has taken up the online slots world by a storm - becoming part of too many reel adventures now.

The gig is all the same - land six of these symbols to trigger three respins, which are reset if a medallion stops on the reels. If the entire grid gets covered in that symbol, the game pays the 1000x multiplied by the winning bet.

Also, the individual coins carry a cash prize between 1x and 100x relative to the bet. These are taken on aggregate to spell out the size of the cash prize.

All41 Studios have not release their online slots as free play demos, outside the Quickfire platform, so technically they are available to those players who hold an account with Microgaming.

Everything about this game is part of a standard package, piecemeal slot game. The coin feature is always a welcome addition into any slot, though, and we can’t complain on that front. It wouldn’t have hurt if the 1000x amount was second to the first of double that amount, but then this is a medium variance slot.

Discover the Arena of Gold slots by claiming a welcome offer right from this page and play at top rated online casinos.