Chinese Spider has three reels but isn't left without features. As you could have guessed, the spider is in the lead role here as the symbol that can stack multiply towards a maximum win of an amazing 3840x multiplied by the winning bet. Win outcomes can also involve the wild multipliers that can reach a maximum of 32x. 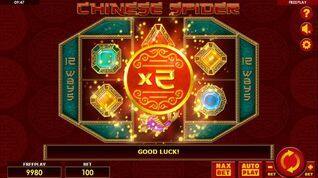 A reel-set shaped like a spider and encased in jade is a new online slot by Amatic Industries. Its inspired title is Chinese Spider slot, as it takes the player on a regal online casino experience where a spider is the most valuable symbol.

By all appearances, this is a simple game that unfolds on three reels and two and a half reels. In other words, there are two reels that have two rows and the central reel has three, towards 12 paylines.

Wins are made with three matching symbols, however, Chinese Spider can cast the same symbol across the entire reel-set, or with the help of the spider wild symbol.

Amatic Industries have their own specific way of creating the graphics layouts on any of their games. The same is visible here. Chinese Spider slots has this quality of a land casino slot, and without doible, the initial release of the game must have been on the casino floor.

The color layout is a perfect shade of red combined with teal. Surprisingly, the typical gold color that is associated with any given China-themed slot is missing from the picture. As for the symbols, we have the usual: dragons, koi fish, flowers, a crane brooch and four different gems.

How to Play Chinese Spider Slot

Your encounter with the spiders may  begin with the push of the spin button, which can be found in the bottom right corner of the screen. Make that action once for the game to deduct hte active bet one time from the balance.

If you want to play the game without making any manual inputs, you can select the autoplay feature from the bottom right area. Press the AutoPlay button for the game to start the automatic spins rounds right away. To stop this mode press the same button again.

To select the bet that you would like to play, press the minus or plus button to arrive at the specific amount. Chinese Spider slot shows the bets not in currency amounts, rather in who numbers which is usual for Amatic.

So, the smallest bet of 10 would equal 10p, 100 bet equals one pound and the game's maximum of 1000 equals to 10 pounds or the equivalent amount that has been set by the casino.

How to Win Chinese Spider Slots

To win a cash prize you need to land three matching symbols on one of the paylines. It goes without saying that these post no matter the position on the rows, because the 12 paylines cover them all.

Smaller prizes are made with the gems symbols. Chinese Spider slot pays still a decent prize of £12.00 for seven of the same, with any of the gem type, and £1.00 for three.

These amounts are won with bets of £1.00 on the winning spin.

The game at hand has a single feature and this is a supercharged wild symbol, which carries multipliers. Sadly, no free spins bonus feature on this one.

Nevertheless, the multipliers are a marvellous boost for the potential wins. A single wild multiplies the win by x2, two equal x4, three x8, four x16 and five bring the maximum multiplier of x32.

Amatic Industries want the players to try their games, because their are available as online slots as well as part of the gaming cabinets at land casinos and pubs. This game can be found as a free play demo slot at online casinos that host demo games.

It is amazing how a simple game can be that much fun and carry a hefty payout such as 3840x multiplied by the winning game. This may be a very rare outcome, but it’s good to know it is there. Players can play with as little as 10p but one pound bets seem very sensible in view of the potential payout amounts.

Discover the Chinese Spider slots by claiming a welcome offer right from this page and play at top rated online casinos.