Welcome to the paradise island of the Survivor Megaways slots by Big Time Gaming. The game at hand packs an excellent megaways action that's been updated with couple of specific features. Unlimited multipliers on the two wild symbols are possible during the free spins bonus, whih can also retrigger. The maximum payout potential is 44,000x on the winning bet. 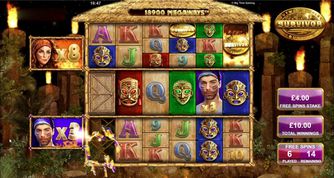 Big Time Gaming are following through with their megaways slots based on proprietary content, such as television game shows. Their latest release is based on the ultra-popular reality game show Survivor.

The megaways system has been slightly modified from the original. Here the maximum number of ways to win is 100,842 and the reels shift to deliver between two and seven symbols per reel.

The payout potential of Survivor Megaways slothowever, is on the other side of 40,000x multiplied by the winning bet, far exceeding the 10,000x cap that we are used to seeing on these games.

Big Time Gaming are no strangers to innovation. After all, they invented the megaways system and they keep improving it. In the game at hand the reel-set is actually split in three.

Top, down and middle parts, which all spin in unison with the active bet, but there is something that's improving the game dynamics and the thrill of playing Survivor Megaways.

There isn't a single thing here that doesn't remind of the Survivor television show. The setting is a paradise island under blue skies, unless you are taken to the free spins bonus, where the tiki torches illuminate the surroundings of the reel-set.

The symbols are all reminiscent of the game show and a well drawn and rendered. These aren't animated on the reels, but there is an animated bit that marks the winnings - by fire.

One of the highlights on Survivor Megaways slots in terms of the audio-visual experiene is the musical theme, which is a cinematic -quality song that matches the reel adventure.

How to Play Survivor Megaways Slot

Big Time Gaming have a way of putting together the game controls layout. The same good old design is visible in the game at hand. All of the settings and windows that refer to the game's progress and the balances can be found on the right hand side of the reels.

The spin button is the big rectangle in the bottom right corner. Above it are the buttons for the menu and autoplay. The controls above these are for the stake, that is, to select the active bet.

You can scroll through the range of available bets by pressing the left and right arrows. The smallest bet in Survivor Megaways slot is £0.20 and the maximum bet is £20.00 which is very much in line with BTG's practice of not offering bets bigger than £40.00 on their megaways slots.

If you want to make a go on the game hands-free and enjoy the show kicked back on a sofe, or a mound of sand as a headrest, press the double arrows on an emerald green background. This open sup the autoplay menu where you can choose from the automatic spins presets and add the optional controls over the balance spend.

How to Win Survivor Megaways Slots

If you are ready to play, let's make a note on the payout mechanism. As most may already know, megaways slots make consecutive wins, also called cascading wins. This is the case of the Survivor Megaways slot.

Each spin may result in subsequent wins, where the winning outcomes are deducted from the reel-set and the blanks are filled with new symbols.

The tiki hut is split in three parts. The topmost and the bottom turn up symbols that can post on between one and three rows. The middle reel shows expanded symbols of three rows on the reel.

You need three matching symbols for a win outcome, or six or more for the optimal wins. The most valuable symbol in Survivor Megaways is the purple tiki maks, which pays 50x on the winning bet for six of the same.

The Survivor game logo is the scatter/bonus symbol. It can appear anywhere on the reels in three or more positions to trigger a free spins bonus. Regardless of the number of triggering scatters the number of free spins awarded is 20.

The bonus gets couple of added features compared to the base game. There is the urn symbol which increases the multipliers, which are the wild symbols that are represented by the competitor characters. The progress on the multiplier amount is show on these symbol's respective displays  on the left.

What is more, the value of the multipliers doesn't reset, they can just keep adding on, even if you are lucky to get a retrigger on the free spins with three or more scatters, which adds five extra spins.

Big Time Gaming are champions for releasing their online slots as free play demos. These are made available to try for free at all casinos that carry BTG slots.

By all means we thought that the Royal Mint Megaways was going to unseat Bonanza slot from its throne as the most popular Megaways slot, but that didn’t happen even though the former is more than a solid megaways adventure. Here however, we get a game that will attract more attention, at least more than Lil Devil, another slot by BTG.

Discover the Survivor Megaways slots by claiming a welcome offer right from this page and play at top rated online casinos.