Put on the helmet, raise your shield and walk the line with Dork the Dragon Slayer. This 20 payline slot by Blueprint Gaming is a cartoonish and playful display of a dragon-slaying adventure that can deliver as much as 10,000x multiplied by the line bet. The game has cascading reels and four straight wins trigger the amazing free spins bonus feature that can lead to winnings with up to 5x multiplier. 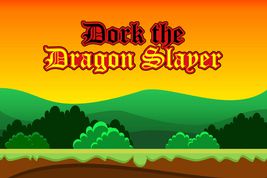 PlayDork the Dragon Slayer slot for a chance to win up to 10,000x on the winning bet.

Blueprint Gaming have stepped out of the boundaries of what makes sense, and crossed into an area where all things are possible, as far as online slots design is concerned. In the Dork the Dragon Slayer slot we have a game that is centered upon a Don Quihotesque character who himself is a knight and who can deliver the good news whenever a winning outcome following each conquest of a dragon.

Blueprint Gaming have created a game that is almost arcade-like, with Dork being able to deliver different blows and cuts against a cast of silly dragons, and the other way around. So, we have a full-blown video slot that gets lots of points for its being fun to play, as well as for the potential winning outcomes.

The highlight of the Dork the Dragon Slayer slot is the free spins bonus feature where the players can win up to a 5x multiplier on the total winnings. This is a standard 20 payline slot with five reels and three rows that makes the payouts from left to the right. Three or more matching symbols deliver the winning outcomes and the biggest prize that you can possibly win is 10,000x multiplied by the line bet.

With a title such as this, it makes a lot of sense why the graphics design is a display of cartoonish characters, and fully animated at that too. The game even has an arcade mode (free spins) where a game is being played, which is needless to say, fully automated and according to the impulses of the random number generator.

All of the symbols of the game are animated, and there are a bunch of events that can take place outside the reel-set, such as a token being added to the latter. There is a musical theme which is more than just decent, as it is uplifting and reaches some epic crescendos during the bonus feature.

How to Play Dork the Dragon Slayer Slot

Setting up the game for the gameplay can mean two things: selecting the bet per spin and setting up the autospins feaure. To do the first, go to the right hand side of the screen and notice the bank note above the spin button. This is where you can choose from the number of available wagers.

The smallest amount that you can play with is £0.20 per spin, and that is one penny per payline. The biggest bet is £500.00 per spin, however there are many options between these two ends to choose from for your bet.

To set the game in autospins mode use the round button below the spin button. This lets you choose from the available automatic spins presets, and optionally add a single win limit or a total loss limit or tell Dork the Dragon Slayer slot to stop the free spins when the bonus feature triggers.

How to Win Dork the Dragon Slayer Slots

There are two symbol categories in the game, the picture symbols and the cards. The first are the high paying symbols and these include a lance, a sword, a banner and the specil symbols of the Wild, which is  dragon and the scatter.

The wild is the most valuable in Dork the Dragon Slayer slots, as it pays 25x multiplied by the winning bet, when five of the same land on a payline. This is the substitute also, which can stand in for any other symbol except the scatter.

Besides the free spins bonus feature there are three reel modifiers in this game, which can show up at random. These are three wild sybols. The Wanted Wilds can deliver as many as three stacked wild symbols. The Fireball Wilds has a dragon blow fire onto the reel-set and turn a number of symbols into wild. ANd lastly, the Scorched Reels results in a blaze that burns the symbols and delivers a guaranteed win with new symbols.

The free spins bonus is triggered when four consecutive wins occur. This takes you to a second screen and to the first of the four dragons. Nothing takes place between the belligerents as long as there isn't a one of the few symbols on the reels.

The symbol of Dork the Dragon Slayer will attack a dragon. The dragon symbol does the opposite. The shield symbol will result in the dragon's attack being blocked. The dragon poison vial poisons the dragon instantly and the health vial will heal Dork.

The game has a fun and entertaining gameplay and the winning outcomes can possibly reach some amazing heights during the bonus feature. And because the game can deliver consecutive wins thanks to the cascading reels, there is also the chance for multiple wins with a single bet too. So, yes, we approve of this game and invite you to claim a bonus and try it yourselves.

Claim a welcome offer and discover Dork the Dragon Slayer slot at either one of the best UK online casinos.