With its five reels and 20 paylines, Inspector Gadget slot is the latest release from the online slots development company Blueprint Gaming. Based on the odd superhero, the game presents Inspector Gadget in his fight against Doctor Claw. Playable from £0.20 a spin, you can enjoy this superhero online video slot which is jam-packed with bonus features. These bonus features include Reel Modifiers and a M.A.D. Bonus which can get you an array of extras.

As stated in the opening paragraph, Inspector Gadget makes use of five reels in four rows and a total of 25 paylines. With a theme based on the famous odd superhero, everything in the slot is on-theme and represent a certain element of the story. The reel set is placed within a framework of cogwheels, springs and tubes, within a wonderful town backdrop with moving clouds. There is a dustbin in the bottom right corner of the screen from which Inspector Gadget appears from time to time.

When the reels of Inspector Gadget are in question, hold symbols that can be grouped into two groups. The low-value group includes standard playing card symbols in a different colour, while the high-values are represented by items from the TV series. The J, Q, K, and A. listed in ascending order, are the game’s lower values awarding payouts for combinations of three, four, and five matching symbols.

The group of high-value symbols comprises different items used by Inspector Gadget including handcuffs, a safe, a ‘Top Secret’ folder, the Gadget mobile, and an Inspector Gadget Super Stacked symbol. All high-value symbols award payouts for combinations of three, four, and five matching symbols, except the last one. The Super Stacked symbol awards payouts for two, three, four, and five identical symbols.

The game uses a M.A.D. logo bonus scatter which is used to activate the M.A.D. Bonus game. It also uses a bomb Wild symbol which substitutes for all symbols, except the M.A.D. scatter. 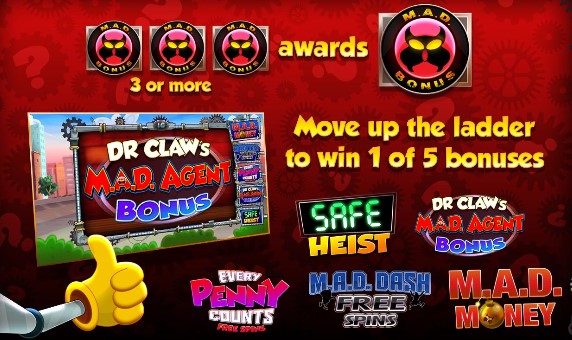 How To Play Inspector Gadget

Operating Inspector Gadget slot is quite straightforward because all the buttons in the game are placed at the sides of the reel set. Before giving the reels a spin, you’ll need to set your total stake for the spin. Since the 25 paylines are fixed, the only variable that you need to set is your stake for the spin.

Once you are done setting your stake for the spins, you can give the reel set of Inspector Gadget slots a spin by pressing the round cogwheel spin button on the right of the reels.

If you are looking to play the game without bothering to press Spin after each round, Inspector Gadget offers an Autoplay option. By pressing the small round button above the Spin button, you will open the Autoplay screen. Here, you can set the number of plays, the loss limit, and the single win limit.

You need to set two of the options, to press the Play button. As soon as you press Play, the reels start spinning and the remaining number of rounds is displayed. To stop the Autoplay option, you need to press the Stop button.

How To Win Inspector Gadget

The base game payouts in Inspector Gadget slots are awarded for landing symbol combinations on the reels. The payouts that you receive are dependent on the number of symbols that form the winning combination.

The highest payouts in the game are awarded by the Inspector Gadget Super Stacked and the bomb Wild symbol with 2, 40, 100, and 500 for two, three, four, and five matching symbols, respectively.

Whenever the phone in Inspector Gadget rings, one of the following mini-features can occur:

With the Mission Gadget Wilds, extra wilds will be added to the reels for the spin. During the Mission Penny Stacked Wilds, stacked wilds will appear on the reels for that spin giving additional chances for a win. Mission Mystery Brain is a bonus feature during which brain symbols will be added to the reels which transform into matching symbols to help you get a win. Mission Colossal Symbols adds huge symbols to the first three or second three reels increasing your chances for a win. The Mission M.A.D. Added puts extra bonus scatters to the reel set to help you trigger the main bonus feature.

The game has two smaller modifiers that include the mallet or the safe which change a losing round into a win.

When you land at least three of the M.A.D. Bonus scatters, a Wheel of Fortune will spin and award you one of the five available bonuses.

If you get Safe Heist, you’ll pick safes to reveal prizes until you are made an offer. Dr Claw’s M.A.D. Agent Bonus lets select items to reveal a multiplier for your win. Every Penny Counts Free Spins starts a free-spins round in which frozen wilds will appear on multiple sets of reels. M.A.D. Dash Free Spins will get you a number of free spins on a 5x4 set of reels with a bonus trail above. Finally, the M.A.D. Money Bonus lets you pick from the items on display to reveal cash awards until you reveal ‘Collect’.

The Inspector Gadget slot RTP, or Return to Player, is an excellent 96.49%. With such a percentage, this Blueprint Gaming's online slot could easily be listed among slot games with above-average RTP rates. If you are wondering which slots are considered as above-average RTP slots, everything that's above 96% is considered an above-average.

When it comes to the RTP, it is a theoretical calculation of how much a slot will pay back over a certain period based on all the bets played on that slot. The amount is given in a percentage and the higher the percentage the more you could win over a longer period of time.

If you're an avid slots player, then you already know ho variance works. On a high variance game, you'll get fewer wins, but the payouts will be higher. On the other hand, a low variance game will return plenty of smaller wins.

The variance of Inspector Gadget slot is somewhere in between. It is a medium variance slot that will award you medium-sized wins on a relatively moderate basis. This means that you will hit lots of smaller wins with an occasional big win. When playing medium variance slots, smaller wagers will get you plenty of smaller prizes. If you want to have better chances at landing higher payouts, you should raise your stakes a bit.

However, you should always set your stakes within your budget and only play what you can afford to lose.

As with most online slots coming from the studios of Blueprint Gaming, Inspector Gadget has been optimized for mobile devices. In fact, if you want to play Inspector Gadget, you can do it on almost any smartphone, tablet or PC. All you need to do is select the slot from your favourite casino and start playing. There's no need to download any software or app because the games will open directly within your browser.

If you want to try the gameplay of Inspector Gadget and get more familiar with the slot, you can find a free play or demo version online. The good thing about the free play of Inspector Gadget is that you don't need to sign up to a slots site or online casino to play it. It is free to play but if you land a big win, you will not be able to bank that amount because you're playing for fun.

Inspector Gadget wouldn't be the character we all know and love without his famous theme song. That is why the Inspector Gadget theme song keeps you company while spinning the reels. It is a slight variation of the original composed by Shuki Levy and Haim Saban, but it is still the iconic theme song.

Here's a fun fact about the Inspector Gadget theme song. It is said that Edvard Grieg's piece "In the Hall of the Mountain King" has been a major inspiration for the theme song. Now that's a combination of two classics from two different worlds!

If you like to try some other Blueprint Gaming slots, you can find many reviews right here on Slotswise.

Have a spin on the five reels and 10 paylines of Big Banker and enjoy the luxury of this Blueprint Gaming slot! Playable from only £1, you have a chance to spin for the slot's maximum payout of £250,000! For the more adventures players, Big Banker offers a gamble feature that can get you excellent real money rewards.

Based on one of the most popular adult animated sitcom of all time, Beavis and Butt-Head slot lets you take a peek in the life of the two couch potatoes. Playable from £1 a spin up to £500, you're in for some rocking slots action with plenty of bonus features! You can win a maximum of 10,000x your stake which is capped at £250,000. That's an excellent potential for a medium variance game.

Inspector Gadget channels the spirit of the odd cartoon superhero in the best possible manner with its multitude of bonus features and original music from the TV series. The bonus features hit regularly, with the smaller ones more frequently.

So, claim your welcome offer from the casinos featured at Slotswise and spin for the chance to win on Inspector Gadget slot!

Star Trek Against All Odds