Viz slot from the software producer Blueprint Gaming is probably one of the most entertaining video slots since it is based on the Viz comic and television show. Players can get some chuckles and potential payouts from few extra features and 20 fixed paylines. 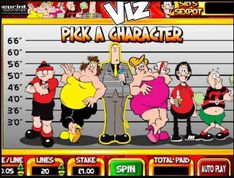 One of the most original and foul-mouthed publications in the UK has warranted a layout of five reels and 20 lines packed with bonus features. Bearing the names of cartoon characters from the show that can shake out cash prizes and perhaps make you laugh.

Viz slot is based on the extremely popular UK comic magazine that was originally published in 1979 featuring some of the magazine’s best-known characters. As previously mentioned, the reel set of this Blueprint Gaming release comprises five reels, three rows, and a range of 20 win lines to select.

Next in line is the Q symbol, followed by the K, and finally the highest paying symbol from the low-value symbols, the A symbol.

The high-value symbols include a VIZ magazine cover as the lowest paying symbol, followed by the VIZ 30 and VIZ symbol, both awarding same amount for certain number of landed symbols. The game’s highest paying high-value symbol is the Super Wild symbol.

The game offers additional symbols that include such characters as Johnny Fartpants, Sid the Sexist, and Roger Mellie, just to name a few, and a Usual Suspects symbol including the silhouettes of various characters.

How to Play Viz Slot

As with most online slots, operating Viz slot is very straightforward since all controls are located at the bottom of the screen. Before spinning the reels of this fun online slot, you should select the coin size. The slot offers a wide selection of coin sizes you can select as your stake bet per win line.

Next, you need to set the number of paylines that you want to play. As mentioned, you can select from 1 to 20 paylines on which you can play. The selection of lines can be also done by pressing the green “+” and “-“ buttons on the right from the LINES box. Next to it is the STAKE box which displays your total stake.

Finally, you can get the reels rolling by pressing the green SPIN button at the bottom centre of the screen. The second way of spinning the reels is the AUTO PLAY option. If you are not too keen on clicking SPIN repeatedly after each spin, then this option is made for you.

By clicking the red AUTO PLAY button at the bottom right-hand side of the screen, a menu of five pre-set number of rounds to be played automatically opens. By clicking the number of spins that you want to play automatically, the reels start spinning immediately, so make sure to select your coin size and number of lines before clicking it. You can stop the AUTOPLAY feature at any given time by pressing the STOP AUTO PLAY button.

How to win Viz slot

Viz slot requires landing combinations of three or more symbols in order to be awarded payouts. However, like other slots, the game’s high-value symbols will also pay out when two-of-a-kind combinations are landed on the reels.

Line wins are multiplied by the value bet on the winning line with wins on multiple paylines being added together. All symbols on a win line must appear on a played line and on consecutive reels starting with the leftmost to the right and only the highest line win is paid on each line.

As mentioned in the opening lines, Viz slot is packed with additional bonus features bearing the names of well-known cartoon characters from the magazine that will award you great wins. These bonus features include the following:

The hero in this bonus feature is the Johnny Fartpants scatter. Landing three or more of these scatters takes you to Johnny’s Wheel of Fartune where every reel with Johnny on it will spin to reveal a certain multiplier. All of these multipliers are added together and applied to the win.

By landing three, four, or five of the Usual Suspects symbols, you get a chance to select one of the characters and reveal a certain multiplier. The usual suspects include such characters as Roger Mellie, Johnny Fartpants, Biffa Racoon, the Fat Slags, and Sid the Sexist. The biggest multiplier that you can reveal during this feature is worth 500x your original stake.

Viz slot is a must for all those who loved the Viz cartoon magazine. Everything in this online slot from Blueprint Gaming is designed to remind you of the comic, and just like the comic, once you start the game, you can’t get enough of it. The game offers generous bonus features that can get you nice payouts. The advertised RTP of this slot is 95.5%.