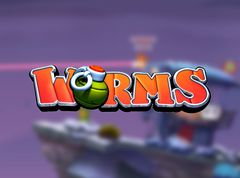 Worm up to the Worms slot demo and play for a litany of amazing cash prizes that come with blasting away the reel-set and the opponents. This computer game inspired online slot may not seem popular, but it actually takes the cake in bonus features.

Brace yourself for the most intense online slot game ever - the often overlooked and underrated Worms slot game by Blueprint Gaming. This four reel, four row and 50 payline digital slot machine features the platoon of brave worms who are determined to wipe out their counterparts with crates of TNT, Gatling guns, uzis and various tactical diversions aimed at confusing the reels and rattling the cash prizes out of them. The Worms slot plays on a popular computer game which received subsequent remakes and found its way to gaming consoles as well as mobile devices. Well, here it is, the Worms slot demo.

It is quite understandable that you are unaware of the Worms slot. Or are you? This game may not be so obscure to those who played computer video games in the 1990's when a total of five Worms titles were released. Then the game continued with titles such as Worms World Party and Worms Forts: Under Siege and last and probably not lease, Worms: Weapons of Mass Destruction. The Worms slot demo however is very different from these games, because, well because it is an online slot and because it pays real money, unlike the video games.

At any rate, most of the game's infamous characters are in it as symbols and the gameplay of the online slot seems to revolve around destroying stuff, for which the player gets cash prizes. The Worms slot demo is one way to play this game before trying the real deal and we will tell you the minor but huge difference that there is to it.

Unlike the games which feature full gameplay of the battleship style game, the Worms slot is a slot machine with four reels, four rows and 50 paylines, which is pretty neat and offers lots of paying combinations. The only difference between the Worms game that is featured in online casinos and the demo version is that the latter does not pay the cash. The Worms slot demo is only here to let the players get a taste of the action. Anything else, such as scoring any one or all of the high paying combinations, will not result in real money moving to your account. The Worms demo lets you check out the gameplay, see how the bets per spin are configured and see if the theme vibes with you. Not much work there, for great amounts of fun to be had.

The fun part starts when playing Worms the online slot. The thousand dollar question is, will it be the Worms demo or the real-money version that comes with real money winnings? Either one. Check out the demo and then claim your welcome package to spin for the win.

Piggies And The Wolf