Discover the Golden Lucky Pigs slot by Booming Games. This 20 payline game has all of paylines working at all times and across five reels and three rows. The top payout is 10,000x coins multiplied by the line bet, as well as some amazing winnings which can be seen on the dynamic paytable. Play the game today when you claim a welcome bonus to one of the casinos. 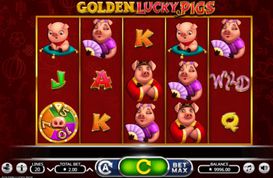 Play the Golden Lucky Pigs slots for a chance to win up to 10,000x according to the winning bet. Get the free spins bonus, too, with multipliers of up to x4.

Once there was a pack of pigs who felt really lucky for having become accepted in the Golden Lucky Pigs slot. The slots experts at Booming Games thought, let's temper with the idea and see if everything pans out the way they'd expected. And, hand on heart, this is a swell online slot game with five reels, three rows and 20 paylines that offers a top cash payout of quite decent a sum of 10,000x multiplied by the line bet.

It appears here that the premise is based on the pig as a lucky animal in ancient China. The picture symbols themselves are all pigs that are given human-like characteristics. They, in fact, seem to be dressed in oriental ceremonial garb and that is completely in line with the overall theme, look and feel of the Golden Lucky Pigs slot. However the game gets its name from the golden pig symbol, which appears on the reels and comes with a multiplier during the Golden Lucky Pigs free spins game.

This is the game's most valuable symbol as it doubles, triples or quadruples the outcome of the winning combination during the bonus. Besides this, the game has the bonus symbol, which is a wheel of fortune that determines the number of free spins from the numbers that are present on the wheel.

The game offers 20 paylines but none of these would budge. With this in mind, we just need to figure out how much to spend per spin, and in that regard the options are far and wide. The starting bet is just £0.20 and they go up in increments of 20p before reaching £1.00 and from there on it is a set of numbers that give plenty of ways how to spin in this game. The players can make it a low stakes game, or a medium stakes action, or a high stakes thrill with those bets that are closest to the maximum of £400 per spin.

The bets are made from the panel at the bottom of the screen and to the left of the spin buttons. Speaking of those, the player's won't be able to miss the green circulat button set dead center below the reels. To the sides of it are the Bet Max and the Autospin buttons. The latter lets the players appoint a number of automatic spins and specify the bet size too.

Lastly, there is the paytable, which may come in useful as it displays all of the symbol wins and bonus feature information. And that about sums the controls that would allow the players to find their way around on the Golden Lucky Pigs slots. Everything else is done quite easily and the Booming Games slots experts have created a slot game that offers the opportunity to have fun time on the reels.

When it comes to the department of wins and recreation, the game offers both. There are wins of decent sizes based on the picture symbols. The dynamic paytable causes the symbol pays to change when the players change the size of the bet. But at any event, the game's most valuable symbol is papa pig. Next comes mama pig and baby pic. Each of these symbols, for a winning combination of five matching symbols pays, £25, £18.75 and £15 respectively, on a bet of £1.00. Any of these symbols can be replaced by the Wild. If the bet is picked up to, say, £6.00 per spin, the winning amounts of the symbol pays in the same order are: £150.00, £112.50, £90.00.

As it can be seen the bigger the bet, the bigger the prize. But thankfully, if Lady Luck has a say in the game to the favor of the player, even on a small bet there could be a decent prize, which then could be spun again on a bigger bet towards the hope that the Golden Lucky Pigs will churn out a hefty winning combination.

The free spins bonus feature is provided with the scatter symbol. This symbol has three numbers on the wheel. The players can win five, seven or ten spins with just three bonus symbols appearing on the reels. During the free spins game, there is the chance of retriggering the bonus by landing just one bonus wheel, which will spin to provide the number re-triggered spins.

Then there are the golden pigs. These symbols are not only wilds but multipliers as well. There are three variants - with multipliers of x2, x3 and x4 on the symbol wins during the Golden Lucky Pigs free spins game.

To enjoy the Golden Lucky Pigs slot, claim the welcome offer to one of the casinos, right from this page.