Super Boom is a bank-themed slot with five reels and four rows. On such an arrangement one would expect 50 paylines, or so, but the game has the good old 12 in number, which is a hint to it being a low variance game. Considering the symbol wins, there are a number of positive outcomes for the lucky players, especially involving the wild as a substitute, as well as a x2 or x3 multiplier. An additional boon is the RTP which has been set at 97.30. Take heed of these compliments as the game may become a favorite hidden gem. 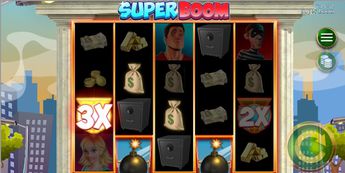 Play the Super Boom slot for a chance to trigger some random wild bombs across an entire reel or two. Land a free spins bonus and play for a chance to win exquisite prizes.

Super Boom slot is a 'rob the bank' themed slot game made by the slots experts at Booming Games. There are quite enough 'booms' floating around in these entities, so it is no surprise that the game has a bomb symbol which plays a prominent role in the gameplay. But more on that in a bit. We have here a slot shaped like a bank, with a reel-set which contains four rows, five reels and 12 paylines. Even though the graphics aren't anything out of the ordinary, Booming Games have developed something with a look and feel of its own, so we were tempted to get more into this game and we didn't err.

This game is lots of fun to play and it can come to pay thanks to the multipliers which seem to be ripe with the expanding wild feature, which is basically, the bomb. The theme includes picture only symbols of a robber and a hero and lots of money-related symbols, such as a huge safe, wads of cash and gold bars. The players will discover that there is a very low bet per spin and a good range that reaches sums that are high-stakes action. So it's not just a cartoonish slot after all.

Those who wish to find out more about Super Boom slot are welcome to follow-through the end of the review and get to the part of claiming welcome bonuses. So let's get to it.

How to Play Super Book Slot

Here is how the game is set up easily and effortlessly. The coin stack symbol that is located in the top right corner of the page opens up a window from which the players can select from a range of sums. The smallest amount for the pet per spin is one penny per line, and on 12 paylines which are always active, the ensuing bet is £0.12. The topmost amount that can be player per spin is £120, 00 which is naturally understood as winning combinations being multiplied by £10.00 per payline.

With a wide range of bets, the game offers a variety that fits any player's preference. Since all of the paylines are active, pressing the spin buttons sets the reels spinning on all 12. There are, as usual, few other buttons in the game that avail a full gaming experience. The players can opt to make the reels spin on their own through configuring the autoplay setting. This lets the players select a number of automatic spins. This is done from the plus button which does 50 spins, but the is to the left of the A button in the menu offers more options.

Behind the menu is also tucked the symbol that opens up the paytable. This is where all of the symbol wins are displayed for all instances that pay a winning combination as well as information on the bonus features, multipliers and the expanding wild bomb symbol.

How to Win Super Boom Slots

There are enough symbols that can avail significant wins or the possibility of rising up to a swollen budget that would allow bigger bets. If the bet is £2.40 then the highest paying symbol will pay £24.00 for five matching symbols. The next-best symbol is the robber, paying £18.00 for five. Any of the wins could reach a triple multiplier thanks to the Wild Multipliers, which appear on reels one, three and five. Also the Wild symbol itself, with either of its multiplying amounts, serves a prize of £24.00 for an instance of five.

Landing the scatter symbol un three positions leads to the free spins bonus. The scatter is the newspaper with the famed robber on the cover. Five such symbols will trigger 12 free spins but we didn't see yet whether another five symbols retrigger the bonus spins again.

The random wild reels can cause the bombs on reels two and four to explode and cause an expanded wild. In the free spins mode this bonus adds a x2 multiplier on the winnings of that turn.

Booming Games are really opening up with a terrific return to player theoretical outcome of 97.30%, which is way above the average. Since it is a low to medium variance slot, winning combinations may appear at more narrow intervals and towards a possible payout of 144,000 on the line bet.

If your luck is right, Super Boom can blast some small and medium winnings without long droughts. The two super-wild blasts cause the entire reels to become wild and increase the chances for a win. These are the plusses. On the other hand the free spins bonus feature isn’t too generous with the number of free spins and it needs five scatters to trigger it - albeit, the scatter does often appear as stacked. So, it is our pleasure to state: try the slot and see for yourself.

To play Super Boom slots, claim a welcome bonus to one of the casinos, right from this page.