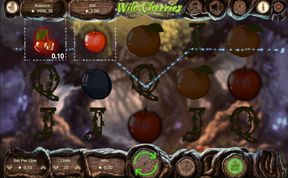 Play the Wild Cherries slot for a chance to win the top possible prize of 180,000 coins on the line bet. The game has up to x4 multiplier and four wild symbols, spins on 20 selectable paylines and has a killer musical theme.

Cherries have been an inspiration and an intrinsic part in the world of slots machines since the first one was built as a mechanism nearly a century ago. The cherry fruit is part of the fruit slots genre, as well as many other, but here it has its own dedicated game in the Wild Cherries slot. Here we have a game of fruits in which the cherries are the most powerful symbol and act as a very important part of the gameplay. It was developed by the slots experts at Booming Games, which have few dozen slots releases under their belt, so our expectations for the quality of the game have been thoroughly met.

Wild Cherries has an engaging gameplay on five reels, three rows and with 20 paylines whose number can be selected to fit the player's gaming preference. The game has multiple wilds, hence the name Wild Cherries. This feature has four such symbols carrying with them multipliers of x1, x2, x3 and x4, plus a pay prize of 100 for a line of five wilds.

The ambiance and mood of play are woven together by the graphics features which the Wild Cherries slot shaped like an ancient oak tree. There is a reel-set that hasn't been put inside a frame, so there is an interesting effects which has the fruits kind of floating in their reel, however the top and bottom of the screen are made by a controls board that have all of the settings and buttons that the player needs for a special gaming experience.

How to Play Wild Cherries Slot

Imagine there is an entire machine that works on tree energy and magic. This seems to be the idea around how the game is being set up. The settings are located within their specific window, and all windows are part of a an expansive tree bark. The Bet Per Line setting is in the bottom left corner of the page. There the players can select the amount that will be multiplied by the number of selected paylines. The values in that window start with one penny, being the lowest, and go up to £20 per line, which produces an amazingly huge sum for a bet per spin.

As for the lines, there are 20 in total, but the players can choose to play on as little as one, which allows for the bet size to be set up according to the players' most specific preference. The smallest possible bet is just one penny, with the maximum that can be spent, an extreme amount of £400, with the highest bet per line of £20 on 20 paylines. Of course there are so many sums for the bet that can be select from in-between the two extremes, making Wild Cherries slots a penny-slot, as well as a high-stakes game.

Few other buttons that will come in helpful are the Autospin and the Paytable. The first is located to the right of the centrally-placed Spin bottom. The other one is in the upper left corner, where it simply says 'Pay'. The button will display all of the symbol pays plus information about the bonus features.

How to Win Wild Cherries Slots

Let’s say that winning the game means landing some high-paying combinations, in our book. Because there is a Wild Cherries slot free spins feature, there is also the possibility for a string of events to unfold, in which the potential subsequent could amount to some pretty nice sums of cash. We know that the maximum theoretical pay is 180,000 coins, so chipping away an eighth of this amount could amount to a fun wad in your balance. Certainly, there is the feature that gives this slot game its title: the Wild Cherries multipliers go up to x4, so these symbols making up the potential winning combinations is something that boosts the anticipation of a good outcome.

We let in just previously some of the graphics design features, but here we will go into the symbols and their pay. The game is one big world of a tree. The paylines are drawn in wispy lines that go across each line that can deliver cash pay for a winning combination. When it comes to the game's symbols, there really aren't that many to recount. There are just three of the category of the high cards: jack, queen and king, but no ace.

From the fruit stand category, there are a plum, an orange and an apple. We know already that the cherries are the game's wild, and these come in four different colors. Then there is a lemon which is the scatter symbol, and that one landing in three instances delivers free spins. Whenever the symbols become part of a winning combination they become alight in an animate fashion that causes this pretty display to vibrate on the reels. A pretty thing in any case, which just adds to the gaming experience.

To get a taste of the Wild Cherries slots you can start right on this page by claiming a welcome bonus to one of the casinos.