Booongo have released a sequen of the Book of Sun slot that has the same free spin bonus and a choice to select a special symbol that expands on the full reel. The reel-set is 3x5 with 10 paylines and there are few high-paying symbols, the top of which pays 500x. 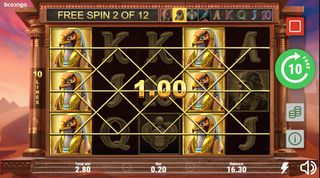 A book of Ancient Egypt has been written as a sequel to the Book of Sun slot by Booongo Games. The new version has a much better potential payout amount of 5000x on the bet multiplier, as well as few exciting payouts generated by the high-paying symbols in the base game.

Book of Sun: Choice slot has three rows nad five reels that spin across 10 paylines, which are always active. The game has a wild symbol, as part of the standard set of symbols, as well as a scatter/bonus symbol that triggers the bonus feature.

One of the features that are available to players who like to jump to the bonus spins instantly, is a Buy Feature, which can do that but at a huge cost. Nevertheless a free spins bonus is there and comes with an extra feature that further increases the chances for bigger payouts.

The low paying symbols are the royal cards, including the ten, which are just basic drawings of these letters. The only symbol that shows faint signs of life is the book, which is after all the symbol that gives the name to Book of Sun: Choice slots.

Last but not least, the overall impression about the game is much improved by the Middle Eastern style melody which sets the mood for an Ancient Egypt slots adventure.

How to Play Book of Sun: Choice Slot

The big green button is the one that sends the reels to spin when pressed. This action deducts the active bet from the reel set one time. The said button takes up a central position amidst the rest of the buttons on the right-hand side of the reels.

Above it is the button for autoplay and below are the coin stacks button and the information buttons which open up the bet setting and the paytable and game information, respectively.

To choose the bet either press the coin stacks or use the minus and plus buttons at the bottom of the reels. The smallest bet is 20p per spin, which consists of twp pennies for a payline bet. The maximum bet is £30.00 per spin, which is a £3.00 on each of the ten paylines.

If you want to set the Book of Sun: Choice slot to play on its own, simply push the Play button in the upper right corner of the reels. This starts the automatic spins right away, so make sure to have selected a bet amount that will let you play according to how you intended to play the game.

How to Win Book of Sun: Choice Slots

Winning at the game requires at least two symbols that belong to the high-paying category. These wins don't return the bet (except the pharaoh's symbol) with 0.5x but keep you into the game. Wins that consist of three matching symbols pay amounts that are much better, such as 3x and 4x with the scarab, falcon and Osiris symbols respectively.

Book of Sun: Choice slot may not offer the best choice in the graphics design area but it definitely has a lot going on in the payouts department. The book symbol is the scatter and wild at the same time, which also pays 200x multiplied by the bet for five matching symbols.

The highest paying symbol is the pharaoh’s, with 500x for five matching symbols on a payline, however this outcome can be supplemented with the wild/scatter Book of Sun symbol.

The bonus feature is triggered with three matching scatter symbol. These can fall on any reel of the reel-set to deliver 12 free spins. The bonus feature can trigger again with another set of three, four or five scatters.

At the start of the bonus the players get to choose one special symbol, which is going to occur more frequently and omes expanded on the reel where it lands. If the bonus feature is triggered again during the free spins rounds, another symbol can be selected so that two symbols can occur stacked on the reel or reels.

The game can be played as a demo slot at the online casinos that offer free play slots to the players.

This is the common thing about all slots by Booongo Games: weak graphics but strong payouts. The expanding/stacked symbol in the free spins round is an extra detail that can help towards scoring bigger wins.

Discover the Book of Sun: Choice slots by claiming a welcome offer right from this page and play at top rated online casinos.