The game comes with three rows and five reels that spin across 25 paylines. In addition to the three instant jackpots and the bonus game, Moon Sisters comes with another extra feature and a theoretical payout maximum fof 1000x multiplied by the winning bet. 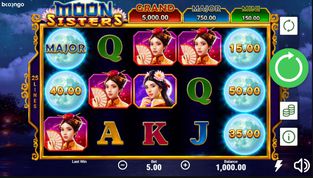 Booongo are stepping away from their fruit and classical pokie machine slots to make a themed game with the Hold and Win jackpot payout system. The present game is called Moon Sisters slot and involves two beauties in an oriental setting, alonside the ubiquitous moon symbols that come carrying cash prizes and trigger the jackpot bonus.

The players will find this game not unlike many slots on the theme. In fact, Booongo has a twin-slot if we can thus call it, which involves another beauty, called Pearl Beauty slot. It is the same game, practically, but with different payline layout, variance and generally different maths.

The game revolves around thre symbols that are the most anticipated symbols on the reels. These are the high-paying picture symbols of the girls, which give the Moon Sisters slots its title; the other symbol is that of the moon. The other picture symbols are a butterfly and a cherry blossom, while the low-paying category of symbols are royal cards.

Visually the game looks pleasing. There is careful work being done around the reel-set, but this is after all one of those slots that weren't meant to impress with its graphic design. Nevertheless, there is some dynamic to the game in which the focus is on the Hold and Win bonus game.

How to Play Moon Sisters Slot

To start playing press the spin button which is located on the right-hand side of the reel-set. But before anything it is best that the players select the bet that is more in line with the balance and the way in which the game should be approached. Whatever the casino's default bet amount is, it may not be the one you would play at the start.

So, to change the bet on Moon SIsters slot simply press the minus and plus buttons to arrive at the desired wager. The smallest bet that anyone can play on this game is £0.25 per spin, while the maximum bet is £60.00. Yes, the game doesn't come any cheaper than 25p but that is because it is a jackpot slot.

One way to play Moon Sisters is by setting up the autoplay option. This can be done by selecting the button in the upper right corner of the screen. The automatic spins begin immediately, so it is best to choose an adequate bet before initiating the autoplay mode.

How to Win Moon Sisters Slots

Winning at the game requires getting at least three matching symbols on any one of the paylines. Since there are 25 paylines, it is possible to win on multiple lines on the same spin.

The game has a wild symbol, which is represented by two koi fish. This symbol substitutes for all other symbols, except the moon. Interestingly enough, wilds can appear on the reels in stacks of two and three symbols, and land on more than reel.
Outcomes such as this can significantly increase the odds for getting a winning outcome.

The game comes with another symbol that can pay - that of the moon. Each of the moon symbols that land on the reels carries a prize that is relative to the bet. Playing one pound per spin can result with prizes of 2x, 3x and 4x multiplied by the bet.

The prizes add on aggregate and go into your balance when there are six moons from the same spin. This triggers the Hold and Win bonus where only that symbol appears. The more moons you get the bigger the prize is. Filling up the entire reel-set with moons pays the 1000x Grand jackpot.

The Major and Mini jackpots are 150x and 30x and can trigger when they come attached on any of the moon symbols.

Each new moon that stops on the reels of Moon Sisters resets the respins to 3.

Booongo has released the game as a free play demo slot, so that players can try it for free and check out the gameplay and the features.

It one of ‘those’ games. The payouts are nothing to brag about, but the jackpot game can result in a top payout of 1000x plus whatever cash has come attached on the moon symbols.

Discover the Moon Sisters slots by claiming a welcome offer right from this page and play at top-rated online casinos.