Based on the DC comic, Batman slot from Cryptologic plays across five reels and 50 paylines. Playable from £0.01 up to £2.00 per line, you spin with a maximum bet of £100.00. The game makes use of a Wild symbol, as well as bonus features like Bonus BEt, Re-Spin, Descent INto Madness and a Gamble option. 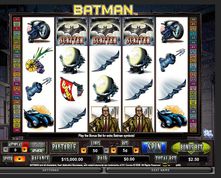 You'll head straight into the heart of Gotham City with this fantastic online slot game, as Batman attempts to fight city's organised gangsters and, his arch-nemesis The Joker. Of course, this is the plotline of the original Batman story, so it makes a lot of sense for Batman slot to be based on the same premise.

In fact, there is more than one Batman slot, by more than one software provider, but here we’ll discuss the game produced and released by Cryptologic. This game was released back in 2013, but it is still popular and widely recognised as one of the leading online slots. The symbols are simply drawn, but it is obvious that this was done on purpose, in order to make the game look more like the original comic book version of Batman.

Commissioner Gordon, the Batmobile, the Batcycle, the Bat-signal, the Bang Flag, an Acid Flower, the Batwing and The Joker all feature in this fantastic online slot game. This has been done to make sure that the slot will be a big hit with Batman fans! And we think they managed to do exactly that.

The graphics and all visual effects are also done in accordance with the game’s simplistic and minimalist aesthetics. The game comes with a non-standard grid with five reels, four rows and 50 paylines. The control panel features quite a lot of buttons, well, more buttons than what you’d get on an average slot machine, but they all have a purpose and you get pretty much the same options.

All paylines are shown as numbers on both sides of the reels, with each number placed in a box of a different colour. The reels are white, so all symbols are placed against a white background. The scene behind the reels is dark and it shows Gotham City.

How To Play Batman

As we already mentioned, there are plenty of buttons, but each of them serves its purpose. The play button features the word ‘Spin’ and there are 50 paylines with a minimum wager of a single coin worth one penny. So, you can play with all active paylines for 50p a spin. However, this is a game where you can also decrease the number of active paylines and spin the reels with less than 50 active lines.

But beware, if you get a combination on a line that isn’t active, you won’t get anything, as a win may only occur on an active payline. So, once you have selected your stake, you just need to press spin. If you like to set the reels to spin automatically, you can just press autopay and set the reels to spin without your interference. You can stop the autoplay at any time and proceed on to press spin each time.

The bonus bet button allows you to set an additional bonus stake before the spin is activated.

How To Win Batman

You will need a minimum of two or three instances of the same icon across an active payline for a win. The number of required symbols depends on the symbol in question. You will need at least three of the low-value symbols, but two Joker or two Commissioner Gordon symbols will also trigger a payout

The maximum in-game prize is 2,000 coins. A win can only be triggered if the symbols are aligned from the leftmost towards the rightmost reel. In addition to the standard symbols, the game also features a wild and a scatter. The wild can replace all symbols that appear on the reels, apart from the scatter.

The Batman online slot includes a re-spin feature which is triggered when Commissioner Gordon appears on reel one and Batsignal appears on reel five or the other way around. When this happens, the middle three reels go blank and the bat signal will rest on one of them, giving that reel expanding wilds for the re-spins. The other reels will spin three times and all payouts during the re-spins are doubled.

You should also look out for the Descent into Madness feature, which is triggered only when the Bonus Bet is active and three scattered logos appear on the screen. In this feature, Batman must first defeat the prison inmates in order to win bonus credits before he then goes after The Joker. If he traps the Joker, you can win up to 100 times your original bet stake!

The RTP of Batman slot is 95.20% which lists the game as a below-average RTP online slots. An RTP of solid 96% is considered an average and you should always aim to play slots with an RTP equal to 96% or higher. The RTP is a theoretical calculation that takes into consideration all bets played on a slot over time.

Batman really is a game that will appeal to both Batman fans and anyone who is just looking to play an exciting online slot with fun features and great bonuses.

If you want to give Batman a spin, claim your welcome bonus from the casinos promoted here at Slotswise and spin for the chance to win big on Batman!.