Players can discover a reel set made of three rows and five reels that spin across 30 always-active paylines. The game can produce winning outcomes with three or more symbols and the reels can spin for a cost of at least 30p. Emperor's Palace has low to medium variance and a maximum payout of 1000x multiplied by the bet, not considering the jackpot prizes. 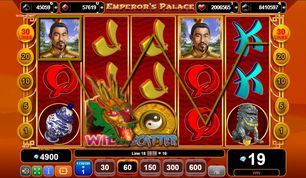 EGT are taking to the ancient days of imperial China where emperors enjoyed the status of demigods and were surrounded by the appropriate luxury and a diverse retinue of advisers, concubines, cooks and poets. Emperor's Palace slot is the fitting name for a game that comes with EGT's famed four instant jackpot arrangement.

In addition to the base game, the players can take any winning outcomes and take them to the gambling table, where a guessing game done correctly can lead to doubled winnings for each good guess. Also, Emperor's Palace is a game that has few symbols that can pay with only two of a kind, which is always a refreshing event on the reels.

In terms of graphic design, we see features that aren't wildly different from the drawing and rendering techniques of this company. Games by EGT are destined for the slots parlors and casinos around Europe and other regions of the world, so it is sure that they play marvellously on the big screen. The symbols have been given just a bit of animation, however, winning outcomes are marked in a way that makes the event known.

Emperor's Palace slots takes several cultural artifacts from ancient China and spins the around in this setting. The high paying symbols are a blue ink on white background vase, a statue of a lion, a lotus paddy, portraits of the Emperor and the princess and there is a green dragon in place for the Wild symbol.

Players can play with the sound on, which enables a dreamy melody that is quite typical for this genre of slots.

How to Play Emperor’s Palace Slot

Your reel adventure can begin by locating your bet amount from the five presets at the bottom of the screen and simply pressing it once for one bet for that amount. In order to change the values inside those boxes, players can press the blue button which ups the BET amount and with it, the total bet per spin.

The latter offers another way of playing Emperor's Palace slot. Pressing the red button starts the game in its automatic spins mode, which last as long as there are funds in the balance or until you press the same button again to go back to the regular mode of playing.

How to Win Emperor’s Palace Slots

Winning outcomes are rung up when landing at least three matching symbols on a payline. The wild symbol can substitute for any of the standard symbols, except the Yin and Yang scatter, but it also pays the most valuable prize of the game - 1000x for five of a kind, as well as 10x for two of a kind.

The emperors's symbol pays 50x for five of the same and the empress' pays 45x. Payouts consisting of two, three and four symbols pay 5x, 10x and 20x. The remaining high-paying symbols are the lotus paddy, the vase and the stone statue of a lion. The remaining regular symbols are the royal cards. All of the amounts that are stated above are for winning bets of 30p per spin.

One thing to keep in mind is that the scatter symbol can often appear stacked on the reels and it also lands only on the three reels in the middle.  The free spins bonus is played on an alternative set of reels and the bonus can retrigger with another set of scatters.

Players can explore the game’s features and the base game by simply playing it in practice play mode, which is possible at online casinos that host slots by EGT.

With four instant jackpots that can trigger with any spin and some interesting prizes, this is a game that some players are going to find interesting. The smallest bet of 30p per spin isn’t quite low, but then there are 30 paylines.

Discover the Emperor’s Palace slots by claiming a welcome offer right from this page and play at top rated online casinos.