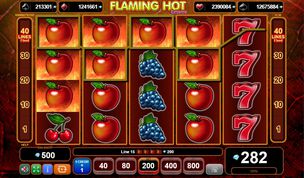 Play the classical 40 payline Flaming Hot Extreme slot by EGT for a chance to win cash prizes and one of the four jackpots.

EGT are masters of retro slots in their own right. Destined and incorporated inside the gaming cabinets that line the casino floors around the world, the Flaming Hot Extreme slot is another edition of a fruity slot sporting four in-game progressive jackpots.

The players will find a reel-set lined with four rows and five reels that spin across 40 fixed paylines. While this type of layout and design isn't so commonly found at the online casinos today, some operators are working against the grain because there are players who can appreciate a good old retro slot.

Not that Flaming Hot Extreme is dated, it's just plain retro. But what's more important is that it can deliver a reel adventure on 40 paylines that generate payouts that range between regular and lucrative with the biggest symbol prize at 20,000 credits in your currency.

In terms of the design features, the game looks very much alike so many other retro games made by the same company. The main difference between this and other games in the class are numerical features.

Flaming Hot Extreme slots has a chocolate-brown color coding which dominates the entire layout of the reel-set and the background.

The symbols are two-dimensional, however they do come to life when they become part of a winning outcome. This makes the event dynamic, as the symbols are set ablaze to a cool video effect.

One feature that is found on most if not all EGT Interactive productions is that the classic/retro slots don't have a spin button. Very much in the manner of slots machines at the casino or parlor/pub these games have five, six or more buttons, each carrying a number of credits for the stake.

The smallest bet is 40 credits and the most expensive bet is 800. These amounts can be configured by the online casinos to represent their currency and amounts which can be customizes for each button. Each time you push a button the Flaming Hot Extreme slot will deduct that credit amount from the balance, which is displayed in the bottom left corner.

To toggle on the autoplay mode simply press that button, which is a red square button underneath the first reel. This action will play an infinite spins (as long as the balance allows it) for the bet that was used on the latest spin.

In a way setting the autoplay requires you to play that bet amount in order to confirm that you opt for that feature.

Few other buttons are on the screen. In the bottom left corner there is the 'i' which opens up the paytable, the four arrows toggle the fullscreen mode and the speaker is for the sound.

By all means, this is a jackpot game that can turn up some incredible amounts for any of the prizes related to the card suits above the reels.

In terms of symbol values, all of the symbols pay amounts that are equal or greater than the triggering bet, as long as you get four symbols or more.

This isn't quite the case with so many online slots where four symbol wins pay a little bit more than the bet. Flaming Hot Extreme slot has a top paying symbol that brings 2000x on the payline bet for five golden dollar signs.

The red sevens also pay a significant prize of 1000 credits when triggered with 40. The BAR symbol pays 300 for five, the watermelon and bananas class of fruits pay 200 and the rest pay 100.

The bonus feature is triggered with the golden dollar sign. Two three or fourof these anywhere on the reels trigger the respin feature where in the best instance, with five dollar signs, the players get 30 free spins.

The game can retrigger when again three or more of these bonus symbols stop on the reels. This also triggers the respin feature where the only symbols are the golden $.

A completely random event, following any given spin the game can trigger the Jackpot Cards bonus where any of the jackpot levels can be won by revealing three of the same card suits that correspond to the prize.

EGT release most of their online slots as free play demos. This allows the players to try these games and decide whether to play with real money. Online casinos that host demo slots may carry Flaming Hot Extreme.

A mystery jackpot, few high-paying symbols and a free spins bonus makes this retro slot an exciting reel adventure. The mystery jackpot may be a totally random event, but it certainly is nice to know that there is the possibility to hit.

Discover the Flaming Hot Extreme slots by claiming a welcome offer right from this page and play at top notch online casinos.