The Sherlock Bones slot from Electric Elephant turns the famous detective into a dog. Accompanying him is his trusted friend Watson (also turned into a dog), and together they chase the nemesis Moriarty (a cat) through London. The game has a funny and wonderful design and incorporates the Rolling Respins feature which triggers walking wilds and expanding reels. This means that you can end up playing with 16,807 active paylines and there’s no limit to how many respins you can get in this reel adventure. Sounds exciting, right? Jump into our Sherlock Bones Slot Review below to find all the details! 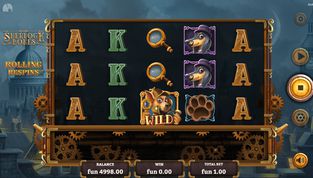 Sherlock Bones is a cartoonish online slot from the developer Electric Elephant. As its title suggests, the game follows the well-known developer Sherlock Holmes but in a dog form, which means that you can expect to find a hilarious reel adventure. In this game, it’s all about the Rolling Respins feature that comes with expanding reels and walking wilds that can lead to wins of up to 5,000 times your bet! Find out more in our in-depth Sherlock Bones Slot Review.

You’ve probably seen many online slots dedicated to the famous detective Sherlock Holmes, but you definitely haven’t seen a game like this one. In the Sherlock Bones slot, the developer Electric Elephant decided to tell the story of Sherlock Holmes in a funny way. There, Sherlock and his friend Watson are dogs, and they walk through the streets of London, chasing Moriarty, which is a cat. Therefore, you’ll need to follow the dogs to solve the reel mystery and achieve the highest payouts. Isn’t it great?

Sherlock Bones is an online slot with 5 reels, 3 rows, and 243 paylines in the base game. However, in the bonus round, the number of rows and active paylines can increase thanks to the Expanding Reels. To start your reel adventure, you need to place your bet per spin which ranges from £0.20 to £100. Just press the coin button on the right-hand side of the screen and make sure to adjust your preferred betting option. To win, you need to land 3 matching symbols on an active payline, starting from the leftmost reel.

In the Sherlock Bones slot, you can win a maximum of 5,000x your bet, which is great for a game like this one. To achieve these high payouts, you’ll need to trigger the Rolling Respins bonus feature that comes with expanding reels and walking wild symbols. We’ll explain how to trigger these features and extras below in our Sherlock Bones Slot Review.

With Sherlock Bones, Electric Elephant comes with a slot that has a little twist on the tales of Sherlock Holmes. Here, we’ll still follow the detective, but he is represented as a dog that chases his nemesis (a cat) and hopes to land big wins. The character symbols are well-designed. The main character, Sherlock Bones, wears the well-known cap, smokes a pipe and holds up a magnifying glass. Then, we have his friend Watson who is also represented as a dog wearing a bowler hat. Finally, the villain in this story is Moriarty, a cat wearing a monocle. The background shows streets in London and there is a mysterious soundtrack which is a perfect fit for the theme.

On the reels, you’ll find the royal symbols K and A as the lower-value ones. The medium-paying symbols are designed as a magnifying glass and a smoking pipe. Finally, the high-paying symbols are a paw imprint, a Watson-like dog and a Moriarty-like cat. Sherlock himself is the wild symbol that substitutes for all regular symbols and has an important role during the Rolling Respins feature.

The Sherlock Bones slot’s RTP (Return to Player) is 96.21% which is the industry standard. In addition, the game’s variance is medium, meaning that you will land relatively smaller but more frequent payouts. The maximum win you can take is 5,000x your bet which is great for a medium variance slot game. When you play this game, make sure to set your bets correctly to be comfortable with your gameplay. Here you can read more about the Variance, Volatility and RTP in online slots and see which one suits you best.

In the Sherlock Bones slot, we get to meet the master detective Sherlock, designed as a dog. The base game is pretty simple, you’ll play on 5 reels and 3 rows and will have 243 different paylines to form a win. Of course, there is the standard wild symbol that substitutes for all regular symbols and helps you form a win. However, the wild symbol is also part of the bonus features from which you can play with thousands of paylines and win the biggest prizes. Let’s check the features of this game in more detail.

When you start playing the Sherlock Bones slot, you’ll notice the special row located under the main reel set. Whenever a wild symbol lands on the main reel set, the special row will spin horizontally, displaying only empty spaces or bones. If a bone symbol lands under a wild symbol, the wild turns sticky, expands downwards and the Rolling Respins feature is triggered.

During the Rolling Respins feature, players are awarded respins until they land a winning combination. In addition, the expanded wild symbol will turn into a walking wild. When you land a winning combination, the wild symbol will walk to the left and will add an additional row of symbols to the game. Up to 4 rows can be added, increasing the number of active paylines up to 16,807. Plus, more walking wilds will be added to the game if another bone symbol lands under a wild. The feature ends when all walking wilds disappear from the reels.

The Sherlock Bones slot is mobile-friendly and you can play it on any mobile and tablet device. It is developed with HTML5 and can adjust to any small screen, on any operating system. You’ll receive the same high-quality design and gameplay when playing on a mobile device.

Electric Elephant is an online slots developer that specialises in making high-quality games with many innovative features. If you’re looking for slot games provided by Electric Elephant, make sure to check the Divine Immortals slot that also has an exceptional design and graphics like the Sherlock Bones slot. The game has 3,125 ways to win which work both ways, towards the game’s prizes which can reach more than 10,000x on the winning bet.

To summarise our Sherlock Bones Slot Review, we can say that this is a very interesting game with excellent features. There, you’ll see the famous detective turned into a dog and can end up playing with 16,807 active paylines. During this game, you can take part in a couple of features such as expanding wilds, walking wilds, expanding reels, and rolling respins. All in all, the game provides an exciting reel adventure that can be played on any desktop and mobile device.

Discover the Sherlock Bones slot by claiming a welcome offer right from this page and play at top-notch online casinos.