Players will find ELK Studio's Win Win slot expanded on and upgraded with bonus games, multipliers, respins and a thrilling reel action. This is a classical fruit machine-themed game with three reels and five paylines that can offer wins of up to 250,000. What makes it fun to play and potentially highly rewarding are the locked reels with the wild and the multipliers. 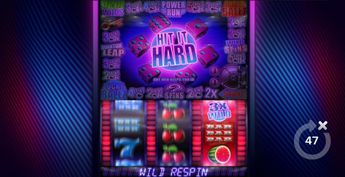 Play the Hit It Hard slot for a chance to win some of the many bonus features and prizes of up to £250,000.

A classic video slots machine is being given a number of extra features and fun gameplay to go along with the win potentials. Hit It Hard slot comes from ELK Studios which have created what is probably going to be a classic among those who appreciate three-reel slots.

With a top payout prize of £250,000 which can result from a single spin and a number of bonus iterations and multipliers, Hit it Hard slot has wild symbol multipliers, wild respins and a bonus game that entails rolling of the dice and anticipating one of the modes to trigger.

There are eight extra games that can be granted with the roll of the dice and all potentially rewarding. What makes it unique besides the features we just mentioned, Hit it Hard slot has only three reels and three rows which spin across 5 paylines, which means symbol payouts are made of threes.

There can be no doubt, the slot experts have created a marvellous game that packs some strong punches in the form of payouts.

The symbols are the well-known classical fruits, sevens and BARs. These come in few iterations so we have a total of nine base-game symbols. Hit it Hard slot has a wild symbol too.

The entirety of this online video slot machine has been designed superbly and there is an excellent dynamic made on the three reels. The ticker below the reels appears exactly like a pinball machine's numbers display.

A sound score does well to grasp the essence of a game of this sort.

How to Play Hit It Hard Slot

This modern-classical adventure on the reels can begin as soon as you press the big, round spin button. It can't be missed in the bottom right corner of the screen.

That can be easily done and so can be the automatic rounds on the Hit It Hard slot. Choose the half arrow with the word Auto inscribed inside to configure the autoplay (autospin) mode.

In the menu, the players can select from the number presets and add additional stops on the rounds, which helps keep a track of the balance by placing stop on total loss or stop on a single win amount, and so on.

How to Win Hit It Hard Slot

To win in the game, you need to land three same symbols on one of the five paylines. There can be win outcomes that post on more than just one payline, so there is always that potential to score big from a single spin.

The reel action takes place on the bottom reel-set while on the display above we can follow the light-show that entails all of the bonus games and wild respins along with the multipliers.

Furthermore, in Hit It Hard slot the triple RED bar symbol pays 5x on the win, the double pays 4x and the single BAR pays 3x.

The fruits are rather low-paying outcomes.

The wild symbol appearing on the reel-set can always turn up the game dynamics into a higher mode. This symbol is stacked with multipliers when the Hit It Hard slot takes us to the bonus feature.

You need a dice symbol to appear on the second row of reel three. The result is, that symbol becomes a 10x multiplier and a bonus game.

The bonus game begins on the upper part of the screen. This is where the dice roll to reveal the number of free spins and the multiplier.

Additional games are the Stacked Wilds which come on reel two and following the spin, on reel three, while the third and last iteration posts stacked wilds on both reel two and three.

Wild 10 Spins are precisely that with multiplier wilds guaranteed on the third reel.

Quantum Leap, Power Run and the mystery spins are three additional bonuses that spice up the board game that is taking place on the display above.

ELK Studios have released their online slots as free play demos and we don’t see a reason why they would withhold this marvellous game from the players who want to try it.

Hit It Hard slot is essentially one of the most entertaining video slots. The payouts are quite good in the top paying symbols category (the sevens) but chances for big wins also come with the wild multipliers and all those bonus games.

Claim a welcome offer from this page and discover Hit It Hard slot at top-rated online casinos.

This slot doesn't have a jackpot, but if you play it right, you could win up to 2,500x the stake. With a bet of £100, you can win £250,000. In addition, the slot has some great bonus features that can increase your winnings.

Can I play Hit It Hard slot with free spins?

Yes, Hit It Hard slot features the Bonus Board Free Spins Game, and you have to land the dice bonus symbol on the middle position of the third reel in order to activate it. The bonus game will start on the upper part of the screen, and the dice roll will reveal the number of free spins and the multiplier.

What is Hit It Hard Slot's RTP and Variance?

This slot has above-average Return to Player that is at 96.30%, with medium to high variance.