The Wiz is the latest magic themed slot by Elk Studios. It was released in 2019 and it is available at a number of online casinos. 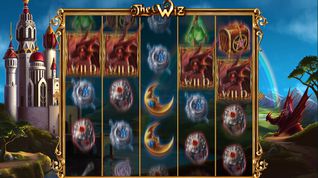 Magic and wizardry themed slots are many and plenty more will come out in the upcoming years. Cleverly titled The Wiz slot by Elk Studios is one of the latest games based on this theme.

Our first impression is that the creators of this game have put quite a lot of effort into the game’s graphics and visual features. The developers had a mobile first approach, meaning that their primary concern was to make The Wiz slot as mobile friendly as possible and we have to admit that they succeed to achieve that, but the desktop version isn’t bad either.

In addition to Wizards and items that wizards commonly use, you will also see some dragons on the reels and the way they have been drawn and designed is pretty impressive. One of the goals is to collect various magical artefacts which can lead to winnings. Of course, just like other online slots, The Wiz is a game of chance, so the way you play and the options you select have no impact on the gameplay and your chances of winning.

You will see a large castle in the background and the music only adds to the whole atmosphere. The Wiz slot comes with five reels, four rows, a somewhat non-standard layout, considering that most modern slots feature five reels and three rows. The reels spin pretty fast, creating interesting visual effects. Overall, the colours are rather vivid.

How To Play The Wiz

The four main buttons are placed on both sides of the reels, each in one of the four corners. The ‘Play’ button is placed in the bottom right corner and is the largest one. In the bottom left corner, you will notice the button that features coins which can be used to set the stake for the game.

In addition to setting the stake per spin, which starts at 20p, you may also choose a betting strategy which will accordingly adjust your wagers. If you like to play casually and have control over your wagers, you don’t have to select a betting strategy. The game features 178 ways to win, which explains why the stake isn’t set per payline, instead you get to choose a total amount.

Bear in mind that no strategy can guarantee success. The Wiz slot is a game of chance, so strategies are just provisional, you can try out one of the offered options, but make sure you don’t wager more than what you can afford to lose. The maximum stake is £100. The game also features an Autoplay button and you can activate up to 100 auto spins.

How To Win The Wiz Slot

If you have a look at the paytable, you will notice the all potential winnings are given in absolute figures. Let’s assume that you’re playing the game with one quid. The minimum amount that you could win is 20% of your total stake, or in this case 20p, whereas the maximum amount that you can win is ten times your total stake. For five instances of the sun symbol across one of the ways to win, you will get £10.

The Wizspins bonus feature which actually is the Free Spins bonus in this game is activated when you get a minimum of two Wizard bonus features on the reels. With two symbols you will get a single spin, but if you’re fortunate enough to get at least three symbols, five spins will be activated. Seven spins are activated when you get least four symbols and five Wizards activate ten spins.

Our The Wiz Review

The maximum amount that you can win in the Wiz slot is 500,000 coins and the game RTP is set at 96.10%, which sets is somewhat higher than most other slots. The game’s rules and settings are clearly outlined and explained in the settings menu. There aren’t many games where low value symbols turn into high value symbols during the bonus game, so The Wiz is unique in that respect as well.

If you want to play the Wiz slot register with one of our partners, claim your bonus and you can start playing right away!