Welcome santa by opening his book for a chance to play the Christmas-themed slot game on three reels and five rows. Ten paylines are selectable as is the configuration of bets which allows for many choices for your stake. The smallest bet is one penny, while the theoretical return to player is 96.00%. Three scatters are enough for the 10 free spins. 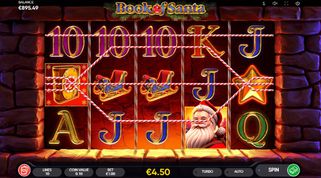 Open the mesmerising Book of Santa slot and play for a chance to win payouts as high as £25,000 plus reel modifiers in the bonus game.

A fireplace stoked with gentle flames, embers being pulled up to the chimney, but no Christmas socks? No worries, the man who is suspect of filling these socks is here to bring cash wins to the lucky players who play the Book of Santa slot. This Endorphina release was just in time for the 2019/2020 season, but who knows, it may stay on for another season owing to the huge potential wins with the high-paying symbols.

Book of Santa plays on three rows, five reels and 10 paylines that are selectable. Essentially, the game can be played as a penny slot because the settings allow that amount for the least expensive bet per spin. However, there is a range that is wide enough so that everyone can find their comfortable balance between the risk and the potential wins.

Besides the base-game wins, which again, can turn up some voluminous wins, there is a free spins bonus feature, an expanding symbol, and a risk (gamble) game for those who aren't worried about losing placing their winnings on the stake for a chance to double, triple, quadruple them, or more.

Endorphina are the slots experts behind this release. They must be commended for doing quite a decent job with the holiday cheer, as its potential to make an impression on slots players is often squandered. Here in terms of the graphics design we have a simple game, but this simplicity is balanced by the winning potentials.

Book of Santa slots isn't that bland either, once we get into it. Besides the animated fireplace and the glowing effect it creates, the symbols are all well-drawn and rendered. The jolly old man with the white beard is like the prototype that's being promoted by one soft drink company. This is precisely the symbol that pays the highest amounts.

Then there is the musical score. Anyone seen a Christmas movie that doesn't have that familiar melody? That could be hardly so. Well, the game at hand has it, and works like a charm with the gameplay.

How to Play Book of Santa Slot

Endorphina have included a number of settings that let the players really find-tune their bet per spin. The control panel can be found in the bottom of the screen, underneath the reel-set.

There, you can see the Spin button in the bottom right corner of the screen. To the left of it is the standard Auto button which lets the players toggle on the automatic spins and there is a Turbo button which causes the reels to spin and stop faster.

Book of Santa slot doesn't let you choose the number of automatic spins. Instead, once the Auto button is toggled the spins commence and don't stop until you toggle it off.

The bets can be configured by selecting the number of paylines, the coin value and the BET amount. The amount of the total bet is reflected in that button. The biggest bet consists of ten lines, a coin value of ten cents and a BET amount of £50.00 per spin. Conversely, the smallest bet is one penny but there are many options between the two ends.

How to Win Book of Santa Slots

The dynamic paytable reflects all of the values according to the active bet. As you chance those amounts the payouts will change for all of the symbol win outcomes.

What's notable is that Book of Santa slots can pay for two symbol wins too, but this is only relevant for the picture symbols and not for the cards.

The most valuable symbol is that of Santa. Five of the same pay an amazing 500x on the bet. Even though it's a far stretch that this outcome will come frequently, it exists and those players who are extremely lucky may chance upon it.

The second most valuable symbol is the bell. It pays 200x on the winning bet for five o the same and the star  and the sleigh pay 75x for five on a payline. Keep in mind, there can be more than a single payout win from a single spin.

The scatter symbol is responsible for triggering the bonus feature. It is also the wild symbol, so it works both ways. What is more, it also pays, a whole neat 200x on the bet for five of the same, and these can land anywhere on the reels.

Three of the same trigger 10 free spins and a special expanding symbols comes with the bonus. This is a random symbol that can potentially trigger wins that are higher than the usual, thanks to the expanding feature.

Endorphina have been kind enough this Christmas to offer this game as a free play demo. This lets the players test the game and get a taste of the action before option to play with real money.

No surprises here, a reel action in the corresponding spirit is available to all. If you can spare a penny per spin, the game is yours to play and the potential payouts are all in the holiday spirit too.

Claim a welcome offer from this page and discover Book of Santa slots at top rated online casinos.