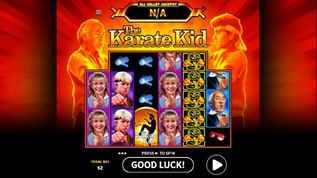 The Karate Kid film franchise first debuted in 1984. It told the story about the struggles of Daniel LaRusso to overcome his transition to Southern California and a group of bullies with the help of Mr. Miyagi. Everi have decided to transfer that fight into the slot world and developed The Karate Kid slots features Miyagi Multipliers and a Young Hearts Respin that highlights LaRusso and his love interest Ali Mills. It took about 35 years to bring this movie to slots players, but the wait is finally over thanks to a licensing deal between Everi and Columbia Pictures. Hopefully, the game will prove to be worth our time! Keep reading to find out more!

If you haven’t had the chance to watch the movie yet, you should definitely put it on your list. Directed by John G. Avildsen, who made the original Rocky film, this is another tale of an underdog overcoming the odds. Ralph Macchio plays Daniel – the kid who has just arrived in Los Angeles and starts taking karate lessons by the caretaker of the apartment block where he lives.

A couple of sequels, a remake and a new web-based series featuring a grown-up Ralph Macchio and original baddie William Zabka have kept The Karate Kid popular for over three decades and this slot game will only increase its popularity.

The Karate Kid slots have five reels and 40 paylines. It features original clips from the movie and is set to be released in March 2019. The background has several shades of red and yellow, along with silhouettes of palm trees.

As for the symbols, you’ll find the Karate Kid himself, Mr. Miyagi, Ali Mills, John Kreese, Johnny Lawrence, a bicycle, a bonsai tree, a retro Cadillac convertible, a boombox and a Wild symbol.

How To Play The Karate Kid

The bet level can be raised to suit your budget using the simple command buttons beneath the reels. Because the game hasn’t been released yet, we don’t have the specific numbers regarding the betting range, but we’ll update this review as soon as we get that information.

How To Win The Karate Kid Slots

While Mr Miyagi put Daniel through a tedious training regime, with tasks that included waxing his car and balancing on a pole, your tasks when spinning the reels of this exciting game only consist of having lots of fun. Elements of the soundtrack come straight from the film and perfectly fit with the whole scenario which sees you helping Daniel and Mr. Miyagi to line up winning combinations of symbols across the reels. Everi slots are known for their innovative features and all are guaranteed to play fair at all times. The payouts of the symbols in The Karate Kid slots are yet to be revealed, but you can rest assured knowing that the software provider always offers the potential to land some massive prizes.

Players earn karate belts as they move through the bonus rounds. Once seven belts have been collected, you get to enter the Final Showdown against a boar. You’ll need to pick your moves against this opponent to win some of the best prizes, claiming up to 800,000 coins on your way to victory.

There’s also an interesting animation showing Daniel demonstrating some of his karate skills on the reels – splitting them into two with every strike. This way, you get up to six sets of reels to spin, increasing the chances to win.

The re-spin bonus includes lots of clips featuring Daniel and Ali and you get more of these two symbols on the reels for better shots at winning the jackpot.

Everi is one of the top suppliers of slots and services to over 1,000 casinos around the world. Unfortunately, there’s a very limited selection of online and mobile-optimized games in its collection, but the ones that have made it to the list are excellent.

Our The Karate Kid Slots Review

Like all Everi slot machines, The Karate Kid slots looks fantastic and offers lots of fun. It will seem like you are part of the movie when you take these reels for a spin, feeling every (virtual) kick and punch as the exciting features are awarded.

Try out your karate skills and enjoy The Karate Kid slots!