The game comes with a layout of three reels and three rows, however, these spin across 27 ways to win, which means three symbols on adjacent reels can still make a winning outcome. Exploding Fruits has a theoretical return to player of 96.00%, medium variance and players can spin the reels and do some space shooting starting with 10p per spin. 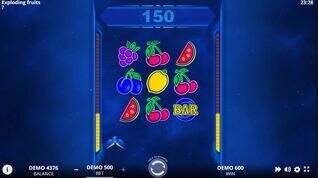 It may take the player a handful of spins before realizing that Exploding Fruits slot is not a typical fruit-themed game. What it is is something way more entertaining than that, even though it has a maximum payout potential of 831x multiplied by the winning bet, which isn't such an exciting sum yet it can still amount to a hefty sum. Nevertheless, Exploding Fruits is filled with action, both in the base game and during the free spins bonus.

The game dynamic and what causes it is the Space Invaders-like gameplay, which involves a bird-like spacecraft that can shoot out fruit symbols for a chance to trigger the free spins bonus. In every respect, Exploding Fruits is a fruit-themed slot, except for that little detail, so that makes it both unique, fun to play and potentially rewarding.

In terms of graphic design, the game is quite standard. The fruits are two dimensional and don't exhibit any special features. It is possible to distinguish two categories - low paying symbols include cherries, lemons, plums and oranges and high-paying symbols include grapes, watermelons, the BAR symbol nd the red hot seven.

Exploding Fruits slots doesn't come with mind-blowing graphics, but there are moving parts and there is a lot of motion behind the symbols. Winning symbols are made to explode by the spacecraft's laser and the display above the reels keeps you informed of all events that take place. Also, the transition from the base game to the bonus feature is quite cool to see. Overall, it's a fun game to play because of the visually-engaging elements.

How to Play Exploding Fruits Slot

Playing the game requires finding your way around the reel set. To spin the reels and make the fruits come on it is required to press the spin button, which is underneath the reels. To the left is the setting for the bet, another left shows the balance and in the opposite corner, there are four buttons that are non-gameplay related settings, except for the fast-forward button.

One way to play Exploding Fruits slot is by activating the autoplay mode. This can be done by clicking and holding the Spin button or tapping and holding on mobile. This opens up a box with settings where players can choose the number of automatic spins. Each turn will deduct the active bet amount from the balance.

Speaking of that setting, the minus and plus buttons are on the side of the word BET. Exploding Fruits can be played with as little as 10p and as much as £500.00 per spin, which is the game's maximum. Regardless of the bet amount, each spin results in the same number of active ways to win, both in the base game and in the free spins bonus.

How to Win Exploding Fruits Slot

Winning at the game requires at least three symbols of the same kind that must occur from left to right on three reels. If there are two symbols that match and a joker on the reels,  that symbol can substitute for any. And since there is no bonus symbol, the joker substitutes for all.

These are payouts relevant in the base game only, because the free spins bonus has five reels and 64 ways to win, so the payouts in it are greater. The seven pays 150x, bar pays 75x, watermelon 35x and so on.

The wild symbol is represented by a joker's hat and mask. This symbol substitutes for all, as we said, but it also appears on the middle reel only.

The game has a free spins bonus which is triggered when the bars on the side of the reels are lit all the way up. For that, players need to gain a continuous progression of wins that have included up to 35 symbols.

This is quite possible, as any spin can result in a payline win that captures more than three symbols. With the right combination of symbols, Exploding Fruits can trigger wins on all nine positions.

When the free spins start the players get three rounds and on five reels and 64 ways. Players get the benefit of the so-called Ultra Jokers which come on reels one and five and stay sticky following a winning outcome.

The game is available as a free play demo slot. Players can play it at online casinos that host games in practice play mode, which allows to try the features and gameplay with free credits.
Exploding Fruits Closing Thoughts

This is a nifty little game and by all means, it is fun to play and can trigger some potentially amazing wins, especially in the free spins bonus.

Discover the Exploding Fruits slots by claiming a welcome offer right from this page and play at top-rated online casinos.