In terms of graphic design, the slots makers at Evoplay Entertainment have chosen to give a set of animals human-like abilities. They both look charming and can shoot an apple off the top of a princess’s head, including the pinky sheep. The set of characters includes a shrewd raccoon, a wondering simian, a sly kangaroo and a daring fox. 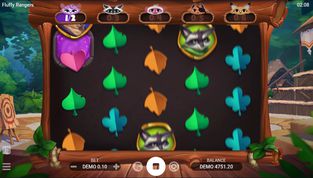 The name says it all - this Evoplay Entertainment game is both about fluff and danger. The player is taken to a shooting range but instead of sharpshooting squires we are given a set of cheery animals whose fluff makes them fit for anything but marksmanship. Nevertheless, players may get to rejoice at a high target being hit across a payline of five symbols towards the maximum payout potential of Fluffy Rangers slot of almost 1000x.

The game comes with three rows and five reels that spin across 20 always active paylines. Wins are made from left to right in the classical way - consisting of three, four and five symbols of a kind. The theoretical return to player of Fluffy Rangers is 96.00% and variance is between low and medium.

The base game looks fresh enough but it isn't all just that. Players will find there is a wild symbol substitute, a symbol collection game that triggers a free spins bonus and something called The Collection Zone, which adds a hint of mystery to Fluffy Rangers.

Fluffy Rangers slots comes with several moving parts that can mean dynamic gameplay and things to see on the reels. Each animal is animated as its symbol lands on the reels, but when any of these is part of a win, the animal does its signature move to announce the outcome. The other set of symbols are leafs that are shaped like the cards' suits and these are animated also. Overall, Fluffy Rangers appears entertaining enough, even for a slot of low to medium variance.

How to Play Fluffy Rangers Slot

Setting up for the gameplay is what is required before you start spinning away for a chance to hit a bullseye win. All of the controls are at the bottom of the reel-set. The button in the dead center of the bottom area is the button for spin. To its left is the coin-bet selection menu and to its right is the button for autoplay.

Pressing spin deducts the active bet amount from teh balance. The active bet is shown in the bottom left area. Players can press either the coin stack button or use the minus and plus buttons in order to select the amount of the bet.

The smallest wager on Fluffy Rangers slot is 10p per spin and the biggest bet is £500.00 These amounts are obtained by the coin value being automatically extrapolated across the 20 paylines, so the small bet of 10ps i half a penny per the active paylines and a bet of £1.00 equals 5p.

One way to play Fluffy Rangers is by selecting the autoplay option. This way you can set up for the automatic spins and relax as no manual inputs are required until the game makes that number of spins. Additional settings enable you to add a single win amount, balance decrease amount and another setting in order to stop autospins when the condition has been met.

How to Win Fluffy Rangers Slots

Winning at the game requires at least three matching symbols on a payline. In terms of values, most important symbol is the sheep, as it pays 3.5x multiplied by the winning bet for three symbols. Four symbols amount to 30x and five symbols pays the biggest prize on the Fluffy Rangers slots paytable of 150x.

The raccoon's symbol pays 2.5x, 25x and 120x for three, four and five of a kind. The monkey is in the middle of the picture wins values, with 2.5x, 18x and 19x, followed by the kangaroo and by the fox. The cards' symbol pay between 0.5x to 35x multiplied by the bet, which aren't such bad amounts at all.

The game comes with something called a Collection Zone that is a portal of pink substance that moves across the reel set. When a high-paying ranger symbol coincides with the portal the game will mark that animal on the list, as every one of the six is metered.

Each animal represents one letter of the word SPINS which is lit when the required number of animals has appeared on that reel and coincided with the portal, Once all meters are filled and you have SPINS spelled above the reels, Fluffy Rangers starts the bonus.

The bonus has expanded wild symbols where the rangers are in their full fighting garb and they substitute for all symbols.

The game is available as a free play demo at online casinos that host their games in Practice Play mode. This avails free credits that enable players to try the gameplay and extra features.

The game is nothing new that we haven’t seen before, but it does a good job at entertaining possible big wins, or as much as it can be possible on a game with low to medium variance.

Discover the Fluffy Rangers slots by claiming a welcome offer right from this page and play at top-rated online casinos.