Find out the powers of the dragons and the dragon masters on the Reign of Dragons slot. This is a 20 payline game with five reels and three rows. It offers five free spins with two of the scatters falling on the reels simultaneously. The top symbol payout is 25x the winning bet and the ultimate prize is £12500. The game includes four scatter symbols that also behave as reel modifiers in the free spins bonus. 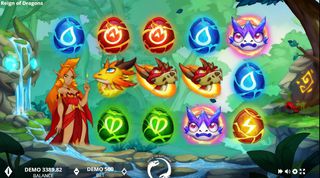 Discover an awesome fantasy game called Reign of Dragons slot. Play for a chance to win £12500 and many smaller prizes.

There is a hidden realm of most cheerful landscape that is home to the cuddly creatures that can be kind and help fetch prizes in cash. The Reign of Dragons slot has fantasy theme that is inhabited by dragons that carry rewards of various kinds.

Little did we know that Evoplay Entertainment were so able to create a world of most unimaginable beauty. But besides the fantastic, there is also the reel part of the game - that is, that which provides the reel online slots entertainment.

Reign of Dragons plays on three rows and five reels that spin across the always-active 20 paylines. The game comes with a number of features that are tied to the scatter symbols, which can modify the reels and potentially bring about cash prizes.

The game has a most valuable symbol that can pay 25x times the winning bet and several other closely valuable high-paying symbols. With an ultimate payout of £12500, the game offers enough big of a prize to invite even the most choosing online slots players.

The graphics design of this slot game is quite engaging. There are the high-paying symbols which are always animated, peering from behind their playful eyes and each one having a ring of a powerful element about their necks.

The background has a flowing waterfall and quite a genuine background that features a boulder that has a glowing mark on it, and a lush forest. So it is quite fitting for the theme and it works together with the symbols to provide a playful gaming experience which can become potentially rewarding.

How to Play Reign of Dragons

The game requires of you to set the amount for the bet per spin first. To do that, use the minus and the plus buttons in the area that is marked by the letters BET. The smallest amount for the wager is £0.10 per spin  and the ultimate wager is a fantastic £500.00 per spin.

The players can find a number that fits the expanse of the play money balance from a wide range of options. And once that number has been selected the spin button is glowing an icy-blue and ready to send the reels spinning.

For those players who wish to let the Reign of Dragons slots play on its own, there is the autospin option, which can be activated by holding the spin button that is represented by a pair of dragons chasing at their tails. A board opens up that displays a number of autospins presets.

The game's symbols and their values can be seen on the paytable. You can access this area by selecting the 'i' button from the bottom left corner of the page.

The paytable describes not just the symbol pays for each paying instance of three or more on a payline, but also the game rules and how the bonus features are triggered.

How to Win Reign of Dragons Slots

The most valuable symbol of the game is the wild. It pays 25 when five of the same end up on a payline. This symbol substitutes for any other, except the scatters.

Next on the list of symbols ordered by value is the red dragon, which pays 20x and the orange dragon with 15x and the blue and the green with 10x and 9x respectively.

These are the payouts when five of the same symbols land on a payline. The low paying symbols are comprised of the dragon eggs, each one matching the color of its family.

The winnings are paid when the three or more of the same, including the wild, falls on a payline from left to right. This is not the only way to score cash on the Reign of Dragons slot. There are also the bonus features which can give an immense helping hand in that direction.

The game has four different scatters. These can activate their respective feature plus the reel-modifier when each falls on the specific reel and position.

The Reign of Dragons free spins bonus is activated when two of the scatter symbols anywhere on the reels will activate five free spins. The scatters are active during the free spins and they modify the reels in a specific way.

The Master in Red symbol can land on reel one and it takes the low-paying red symbols to replace them with the wild.

Master in Blue can only appear on the fifth reel and in return, the three reels in the middle become synchronised with the same set of symbols.

Master in Gold can fall on reel one and invites one or two golden dragons to nest on the best position of the reel-set, towards a potential winning outcome. These dragons become wild.

Master in Green appears on reel five and causes all of the low valued symbols to become sticky wild.
Reign of Dragons Free Play

Besides the free spins bonus the game itself can be found at some online casinos and it can be played there as a demo. But since the smallest wager is only 0.10, the game can be enjoyed with a small wager and make reel payouts in return.

The game offers an engaging form of entertainment. There are enough reel modifiers to call this a bonus rich game. Although the free spins only come in fives and there is no word about retriggers, still, the Reign of Dragons slot has the potential to unleash a series of events and possibly reach some great sums.

Discover the Reign of Dragons slots when you claim a welcome offer to either one of the best UK online casinos.