The game comes with three rows and five reels that can spin across 20 paylines. Winning outcomes are mare with at least three symbols of the same kind and players can spin for as little as 10p. The theoretical return to player (RTP) of Rocket Stars is 96.00%, the variance is between medium and high and the maximum payout is 2174x which can result from a single spin. 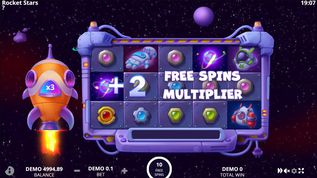 EvoPlay Entertainment are purveyors of an exciting array of releases in 2020. The company has released Sea of Spins slot for a fun twist on the pirate theme and now they are back with another slot that has a maximum payout potential in the area of 2000x called Rocket Stars slot. This is a game doused in purple and rich in robot technology, so let's rocket-propel ourselves to some multipliers.

The players will find an array of extraterrestrial critters who are busy at work building a rocket. The reel set is their blueprint of cogs, robotic arms and space helmets. Scatter symbols help build the rocket and there is a free spins bonus that comes with win multipliers. A wild symbol is a standard component, which also pays for three, four and five symbols on a payline.

The slots makers at Evoplay have definitely built a game to be remembered because in terms of the graphic design, Rocket Stars slots is impeccable. The high and low symbols, the moving parts and the critters are all intricately drawn and rendered to help the game's perfect dynamic.

All winning outcomes are marked on the reel set by a flash of light and each scatter that gets added to the rocket's development progress is beamed to the meter at the base of the platform. The engineers are busy at work inspecting the hull, climbing the reel set in search for valuable symbols and so on.

Players who don't mind bringing in some fluff in their gaming adventure will definitely enjoy Rocket Stars and its perfect musical theme.

How to Play Rocket Stars Slot

Evoplay Entertainment has their own layout for the controls and settings that makes for an intuitive going about the game. The spin button is a circle that is being circumnavigated by two rocket ships chasing their tails. Pressing that button once sends the reels spinning and deducts a piece of the balance in the amount of the active bet.

The bets can be selected by pressing the minus and plus buttons in the bottom left area of the screen. The smallest bet on Rocket Stars slot is 10p and the maximum bet is £300.00 per spin. Players can change the bets between any two spins, but not during the free spins feature.

Some players prefer to play their online slots in autoplay mode and this game makes that possible. Pressing and holding the Spin button opens up a board with automatic spins presets, however, this way of accessing the setting doesn't provide other options.

Per the above, going through the menu button has a Settings tab where the player can set values for the loss limit, single win limit and few other options that can help mind the balance while in Autoplay mode.

How to Win Rocket Stars Slots

Winning at the game requires wins that consist of three or more matching symbols straight, or with the help of a wild or multiple wild symbols.

Speaking of the wild, it can occur on any reel and is shaped like an orb that has electrons, protons and neutrons moving about. This symbol is also the scatter and it is one that pays the biggest single-event prize in Rocket Stars slot - 1.5x, 8x and 25x for three, four and five symbols of the same kind.

Other valuable symbols are the robotic parts. The helmet pays 25x for five, the suit pays 22x and the boots 20x.

The scatter symbols adds one point to the rocket meter, which is also a rocket building yard. Players need to collect 30 bonus symbols in order to trigger the free spins bonus.

Scatters still count while the free spins are unfolding, as they add 1+ to the list of spins and bump up the multiplier by 1x. The multiplier accumulates and remains on point for each winning outcome.

Two other features are present as extra features. Star Gates results in five or six gates added on the reel set. The covered positions are revealed and the players can get either high-pay symbols or scatters.

Space Gate is a 3x3 cover on the center reels which is lifted in order to reveal either a block of scatters or high-paying parts.

The game is available as a free play demo slot, which enables players to try the gameplay, check out the features and get a load of those moving parts and the critters that build the rocket.

Anyone who is up for a space-bound adventure can enjoy this production, which is complete with multipliers, extra spins and wilds.

Discover the Rocket Stars slots by claiming a welcome offer right from this page and play at top-rated online casinos.