Discover a high RTP, low to medium variance slot at 96.89% that has everything to do with world domination. Play for a chance to match Trump, Putin, Merkel, Kim Jong Un or Bibi Netanyahu on the reel-set and claim cash prizes. A free spins bonus does well to throw in extras in the excellent Trump It Deluxe slot. 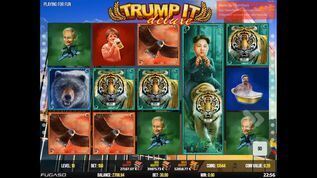 Play with the world leaders for a chance to land bonus features and expanding wilds on the Trump It Deluxe slots.

A jab at some of the world's most powerful and notoriously unpredictable leaders takes place in the Trump It Deluxe slot. This political parody involves patriotic animals and the leaders presented as caricatures, but is actually a full-blown slot game that can lead to a huge maximum prize of 1,000,000x coins.

Trump It Deluxe is a follow up on a previous game that takes the same theme and gives it a funny spin, but here we have a much improved gameplay and more extras, such as the random overlay wild, expanding symbols and three scatters which are associated with a specific flag and the national animal belonging to that country.

Winning outcomes are made from left to right with three or more symbols of the same kind. Wilds substitute for any symbol except the bonus and there are 30 always active paylines.

The slots experts behind this release are Fugaso and they've released more than 60 games, so it is expected that this game will be top notch adventure.

The game takes place in front of the United Nations, the place that all of the protagonists and antagonists on Trump It Deluxe slot love to spurn. The glass facade of the building and a row of flags provide the backdrop of the 3x5 reel-set.

All of the game symbols consist of pictures which represent a symbol of the respective country and their leader, so no high card symbols in this game.

The scatters are the symbols that persistently move, while the rest of the symbols are still until they become part of a winning combination, in which case the tiger roars, the bear growls and the eagle shrieks.

There is a musical theme in the background which is quite decent and adds to the gaming experience.

How to Play Trump It Deluxe Slot

The game starts with the push of the spin button, which is located in the bottom right corner of the screen and just below it is the double arrow button which stands for autoplay.

The bets can be configured by selecting the coin value which then extrapolates across all paylines. The smallest bet is only £0.15 per spin and the biggest bet is £30.00. Bets spin across the 30 always active paylines.

The very bottom strip of controls and buttons also displays the three in-game jackpot prizes, the amount of coins which is translated into the balance, the concurrent bet and the bet levels.

Trump It Deluxe slots offers automatic spins which let the players relax while the game is doing the work.

In the upper right corner are few settings, including the button for the sound and the menu, which leads to the paytable.

How to Win Trump it Deluxe Slots

Symbol payouts consist of three or more of the same. The wild substitutes for any except the special symbols and the optimal payouts are made with five of the same.

The most valuable symbol in the game is the expanded Donald Trump symbol. It pays 300x on the line bet for five of the same. Five of the Kim Jong Un riding a tiger symbols pay 200x and five of Vladimir Putin petting a bear pays 150x.

The animal symbols are also present on their own as a single square on the grid. These are the mid-tier symbols that pay 120x for the American eagle, 90x for the Asian tiger and 75x for the Siberian bear.

One of the bonus symbols is the wild which can trigger the random overlay wild. This can happen at any spin in the base game. This feature comes in at random, and each one throws in its own special features, such as the bear paw awarding four wilds in teh shape of a square from reel one to four.

There are three scatters representing Russia, North Korea and United States. Three of these symbols falling trigger the associated bonus game. The game rewards respins and kickers with each specific feature.

If two different scatter symbol flags appear on reels, there is a battle between the two symbols representing that country. This game also comes with increased chances for bigger wins.

Fugaso are not an overly famous company but they nevertheless provide a range of solutions for online casinos, including more than 60 slots. This is one of their most sought-after slots and it is available for free play demo at a number of online casinos.

With a huge maximum potential payout of 1,000,000 coins and three level jackpots, the game can deliver serious prizes with the help of the wild and the special features. The symbols on their own aren’t wildly lucrative, if not the opposite, but it is the bonuses that make the game rock.

Claim a welcome offer from this page and discover Trump It Deluxe slots at top rated online casinos.