The game comes with three rows and five reels that spin across243 ways to win. Winning outcomes are made with three matching symbols across the reels. The game has high variance and a theoretical return to player of 96.11%. The maximum payout potential is 1000x multiplied by the winning bet and comes with the Grand jackpot. 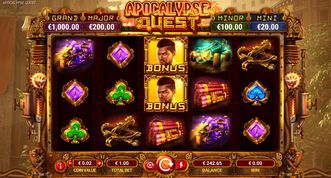 GameArt are the slots experts behind a jackpot game that has four instant prize levels and a tremendously engaging reel adventure. The setting is very much in line with the title Apocalypse Quest slot. We have two heroes on the reels who represent the bonus and scatter symbols. Bets start at half a pound per spin, because this is a jackpot slot after all.

Apocalypse Quest has dynamic base game, as well as two extra features which are triggered with six or more of the bonus symbols. The scatter symbol triggers a free spins bonus that comes with a favorable setting that can trigger bigger and better payouts compared to the base game.

The slot design is marked by qiality graphics and few animated ransitions on the reel-set. The frame that wraps around the 3x5 layout is a steampunk contraption that moves levers and springs to create power. The symbols are divided in two categories. High-paying symbols are two futuristic vehicles, a crossbow and a bundle of dynamite, while the low-pays are the cards suits made of gems.

Apocalypse Quest slots tells an interesting setting. We are taken to a future world that appears to be extremely steamy and devoid of the high technology which we associate with the future. The game appears to have taken some cues from Mad Max. Certainly the Nemesis symbol looks like the villain of that movie and the wild is a truck that plows through a massive heap of dirt. Overall, the game looks decent and is dynamic enough for a fun reel adventure.

How to Play Apocalypse Quest Slot

To start spinning the reels on this wild mechanical device, players need to select an amount in the Coin Value field, which is going to reflect on the Toatl Bet amount. Coin values begin with one penny per the fixed BET and end with a maximum of £5.00, which amounts to £250.00 per spin.

Players who want to enjoy the game in a speedier mode are welcome to toggle on the thunder button, which can be found to the right of the Spin button. To the left of spin is the button for Autoplay, which is one way to enjoy the game.

Selecting from the automatic spins presets enables players to kick back and relax while Apocalypse Quest slot spins the reels on its own. Optional settings include setting up a loss and/or win limit for amounts that can be specified by the player.

The balance amount is shown to the right of the spin button, as is the latest cash prize that's been won. The four jackpot prizes are listed above the reel-set. These are relative to the bet, so increasing that figure shows the actual prize that can be won during the jackpot bonus.

How to Win Apocalypse Quest Slots

Winning in the game requires at least three matching symbols, and five of a kind constitute optimal wins. Winning outcomes are made across the five reels, starting at the leftmost reel, as long as the symbols land on adjacent reels.

In terms of payouts, Apocalypse Quest slot has low payouts. There are no two ways about it. The most valuable symbol, one of the vehicles, returns the wager at 1x, while all other symbols pay smaller amounts.

What's the deal with that? It's the jackpot prizes. The game is all about those, so players who decide to play Apocalypse Quest should have this in mind.

The game has a Bonus symbol which is the male hero. Six of these trigger the Hold & Win bonus where the three respins are reset each time one of these symbols lands on the reels.

Getting the reel-set filled by the bonus symbol to the max rewards the 1000x jackpot.

Three scatter symbols, which are the female heroine, trigger the free spins bonus. Getting the same symbol to land in six positions triggers the Apocalypse Respins where the Nemesis symbols can land along with cash prizes.

Players can try this game with free credits and faux wins at online casinos that host Apocalypse Quest as a free play demo slot.

We’ve seen it all, including apocalyptic slots, but this is the only one that does the Hold and Win bonus feature where players can win four jackpot prizes. On the other hand, are the basement payouts in the base game really worth it?

Discover the Apocalypse Quest slots by claiming a welcome offer right from this page and play at top-rated online casinos.