Dawn of Olympus has a basic layout of three rows and five reels and takes a wide range of bets that begins with only 10p per spin. The jackpot tiers are always on top of the reel-set displaying the amount of the potential win. This is a high variance game that can trigger a maximum prize of more than 10,000x. 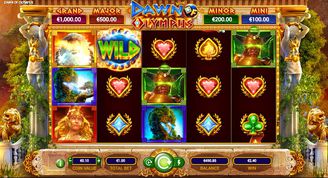 Game Art are the slots experts behind the amazing jackpot game that unfolds under the cloudy peaks of Olympus. It puts the player against mighty deities in a base-game of 10 paylines and a set of extra features that can result in potentially high payouts.

In terms of features, the game has a wild that substitutes for any, except the scatter and bonus symbols. The latter are part of the Pick Me bonus game where Dawn of Olympus slot can trigger any of the instant jackpot payouts. And there is also a free spins bonus that enables the players to make potential for the cost of the triggering spin.

In terms of the graphic design the slots experts at GameArt have created a superb game with a engaging backstory that is in the symbols. The players get to see gods, such as Zeus, Athena and Gaia and monsters like the deamon. These comprise the high-paying symbols.

On the other side of the isle are the low paying card suits. All of the symbols on the Dawn of Olympus slots paytable have been drawn very well. Each of the high-paying symbols spring to life when they become part of a winning outcome. This makes the game visually pleasing, and there is a soundscape that adds to the overall quality of the reel adventure.

How to Play Dawn of Olympus Slot

The game has all of its controls in the bottom area, where the players can choose the coin value and by doing that, set the total bet. The balance is shown on the right side of the divide and the latest win amount is shown in the bottom right corner.

The spin button is placed in the center and is in the form of a sun disk that holds the green arrow. To the right of it is a thunder symbol which is the button that causes the reels to spin faster, when toggled on. To the left of spin is the autoplay button which lets the players configure their slots adventure for a hands-free play.

Dawn of Olympus slotcan be enjoyed that way. Press the autoplay button and select the number of automatic spins. Optional settings include adding a loss limit or a win limit. Fast spin and turbo spin are also part of this gameplay mode.

Last but not least, the sound can be turned on or off in the bottom left corner. The menu button opens up the paytable and the game rules, while above the reels are the four jackpot tiers whose amounts are updated according to the active bet.

How to Win Dawn of Olympus Slots

Winning at the game requires payout outcomes consisting of at least two and three matching symbols. The high-paying symbols and the wild can pay with only two of the same. These outcomes must occur on the leftmost reel.

In terms of value, the most anticipated win outcomes in Dawn of Olympus slot are made with the wild and with Zeus. These symbols stopping in five places lead to payouts of 200x for each symbol kind.

The game comes with two bonus features that can improve the chances for a win or lead straight to one of the jackpot prizes.

The free spins bonus is triggered with three scatter symbols. What is more, the scatter symbols become wild. The bonus spins begin with eight spins and can retrigger. One expanding symbol is added to the bonus at random. Expanded symbols don't have to fall on adjacent reels to form a win, as long as they appear stacked.

The jackpot bonus is triggered when golden disk lands on reels two, three and four. In the event, the get a reel-set filled with the golden disks. Each disk reveals a cash sum or one of the jackpot symbols. Matching three jackpot symbols leads to the corresponding prize.

The game is available as a free play demo, which allows players to try it for free and experience the gameplay, and then decide whether to play with real money.

The game has a very high exposure of 10000x and multiple high-paying symbols, as well as a bonus game with a Major jackpot. All is in place for a thrilling slots adventure in our book.

Discover the Dawn of Olympus slots by claiming a welcome offer right from this page and play at top-rated online casinos.