Instead of the regular three rows and five reels here we have four rows and six reels, which play across 30 always-active paylines. Wins on Norn's Fate are made with three symbols of the same kind, or more. A free spins bonus pays 3x on all wins and the maximum payout that can result from a single spin is 3200x on the winning bet. 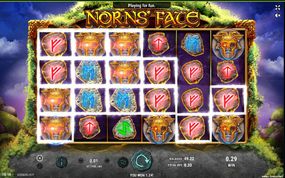 Enter the forest of the druidesses and play the Norn’s Fate slots for a chance to win up to 3200x.

A world of rune symbols and ceremonial masks is hidden from plain sight somewhere in the deep forests of Vikingia. This is where the players can discover an exciting adventure on the reel set of the Norn's Fate slot and its six reels and four rows.

The game's makers, GameArt, have conjured up the magical powers of the vixens, who can appear expanded on the full reel and substitute for other symbols, as well as trigger the bonus game. In addition to the bonus, there is a reel modifier in the base game that can push up the chances for a surprise big win.

The game design reflects runic symbols that are encased in a golden frame, which is in turn covered in green moss. The background are heavy purple clouds above the forest. All this is very much Viking or Druid like.

The symbols appear to have a glow effect to them and whenever there is a winning outcome a magical light surrounds them, changing a number of colors. Besides these moving parts there isn't much else to bring the Norn's Fate slots to the rank of visually sound slot game. Nevertheless, the players may find it appealing for its simplicity.

How to Play Norn’s Fate Slot

GameArt have placed all of the controls below the reel-set. The spin button can be found just below reels number three and four and to the left of it is the autoplay button.

Before you start the game you need to choose a value from the Bet Per Line setting by utilizing the minus and plus buttons.

Whatever the amount of the bet it will cover the 30 paylines. The values range between one penny and £5.00 per line. With this in mind, the smallest bet is £0.30 per spin and the biggest bet is £150.00. Between the low and high extreme are many bets from which the players can choose.

Norn's Fate slot has an autoplay option where the players can select the number of automatic spins, add the total amount of money you wish to bet as a cat, and add the optional limits for a total loss and single time win.

A settings button in the form of a cog can be found in the bottom left corner. It serves to toggle on or off the sound, the turbo mode and some additional settings.

How to Win Norn’s Fate Slots

Like we said at the start, the game throws in wins of three or more symbols on the extended reel-set. There can be more than a single payline win resulting from one spin, as it ought to become evident following a number of spins.

The scatters indeed appear seldomly however the rune symbols ten to fall in clusters, so the chances for a win are there and with the mask symbol.

Most valuable symbol in Norn's Fate slot is the F rune, which is one of the blue-colored symbols. It pays 33x on the winning bet for six of the same. Comparably, five of the same pays such a meagre amount of only 3x on the bet.

The second symbol of significant value is the mask. It pays the same amount as the F rune, that is, 33x on the winning bet. Identical amounts are paid for five, four and three of the same symbols.

The ceremonial mask is the game's wild symbol that substitutes for any of the six rune stones, but does not substitute for the scatter symbols.

The latter category consists of three portraits of druidesses. These can expand during the free spins bonus and act as wilds.

The free spins bonus is triggered when either combination of the druidesses symbols stop on reels four, five and six. Three or more symbols trigger 15 free spins and deem all winnings multiplied by x3.

Furthermore, in the base game the Odin mask symbol transforms into a rune symbol and causes all the symbols of the same kind to transform into wilds.

The game has been released as a free play demo, however the winnings are just for fun, to let the players discover the game. Reel money play can be had at the online casinos on this page and you can start discovering the game by claiming a welcome offer.

Following a number of spins it appears that the action tends to develop slower than one can expect. Base game wins aren’t worth mentioning unless you get six of the same and more than just once in a brief stretch of spins. It is the free spins bonus where Norn’s Fate slots can surprise you thanks to the 3x multiplier.