All would be fine if Roshtein wasn't accused of playing with Practice Play money while making it appear that he was making bets of £2, £5 or even £10 pounds per spin as if it were no big deal. The release of the Roshtein: Immortality Cube was followed by outcry from conscientious voices who called out GameArt for their baking on the fame of Mr. Roshtein, so the company promptly changed the title of the game to Rosh: Immortality Cube Megaways slot. 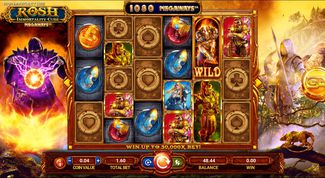 Here is a brand new online slot by GameArt that puts the name Roshtein in its title. For those who may not have come across certain news in the online casino industry concerning Roshtein, this is the most famous online slots streamer, attracting millions of views on his social media platforms.

Aside from this bump on the road, it looks like the company behind the game has dedicated enviable amounts of effort to creating an exciting and graphically-stimulating Megaways slot. Players will be encountered by an epic fantasy premise that is supported by cool visual effects, symbols that have been drawn well and that can arrange for potential payouts of up to 30,000x multiplied by your bet.

The graphic design is illustrative as to what GameArt is able to do in terms of a visual look and feel of a game. Here we have a megaways layout that succeeds in making the high-paying symbols stand out. When there is a winning outcome these symbols are especially fun to observe as they first contract and then explore in the coolest effect ever. Their place is taken up by a new set of symbols and so in succession.

Rosh: Immortality Cube slots probably depicts Roshtein - excuse us, Rosh - as the scatter symbol. This is a robed magician who perfects the art of creating fireballs and elemental orbs. The remaining high-paying symbols are an orc, a warrior-dwarf, an elven sharpshooter and a set of weapons that are coming out of some sort of portals. Overall, those who play Rosh: Immortality Cube will din this to be an amazing game which, despite the controversy, might even go on to amass a following among slots players. 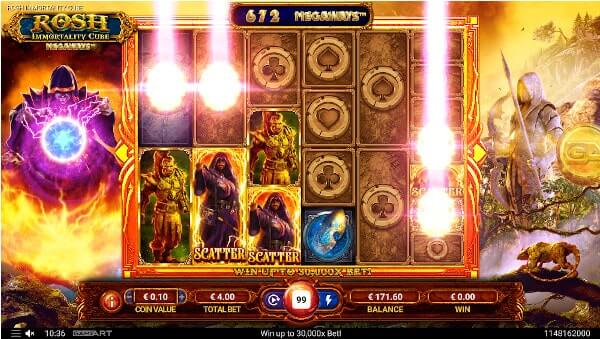 GameArt has included all of the buttons and settings at the bottom of the screen. Players will find the three main gameplay buttons tucked right underneath the reel set and in the middle of the area, that is, when you play Rosh: Immortality Cube on personal computer. Mobile slots players will find a slightly different layout.

Nevertheless, players can start by choosing an amount in the Coin Value field by pressing the minus and plus buttons. The range of values in this regard starts at one penny per the fixed bet, which is 40, so that results in a total bet of £0.40 per spin. The maximum wager is £200.00 which comes by way of betting £5.00 per 40.

Rosh: Immortality Cube slot can be played in autoplay mode by selecting the blue button with the Play symbol in it. This opens up a menu where players can select the number of spins (between 10 and 500) and add the loss limit or win limit or both, as well as toggle either the fast spin or the turbo spin option.

Landing winning outcomes in the game requires three or more matching symbols. Surely enough, this megaways adventure entails cascading wins, which means when you land a winning outcome there is a chance that it may yield to another round and another one following that, if the symbols align.

The reel set can receive up to seven symbols across the rows or at least two big symbols. The total number of ways to win is 117,649. In terms of payouts, the most valuable of the regular symbol of Rosh: Immortality Cube slot is the elven sharpshooter. Six of a kind pay 20x, five pay 4x, four pay 1.6x and so on. The dwarf symbols can pay between 0.56x and 4x, the orc between 0.4x and 1.6x and so on.

GameArt has furnished their Roshtein-themed epic fantasy with a set of features that can contribute towards the base game as well as the bonus feature. First off there is the random event which can cause a win multiplier to be factored-in the win, but this is possible only on a winning spin.

The mystery cube is another random event. The game can cast as many as 12 such symbols in random locations in order to transform into the same symbol. In the event, the player gets three repins that can increase the number of megaways with each spin.

The free spins bonus is probably the crown on top of the experience of those who play Rosh: Immortality Cube because it comes with up to 12 free spins where player win multiplier values that are collected on aggregate at the end. These values are relative to the active bet, so they can reach some quite appealing amounts.

The game is available as a free play demo slot at some of the online casinos that host it. Demo slots enable players to try a game’s extra features, to see how the variance reflects along in the gameplay and other valuable details. 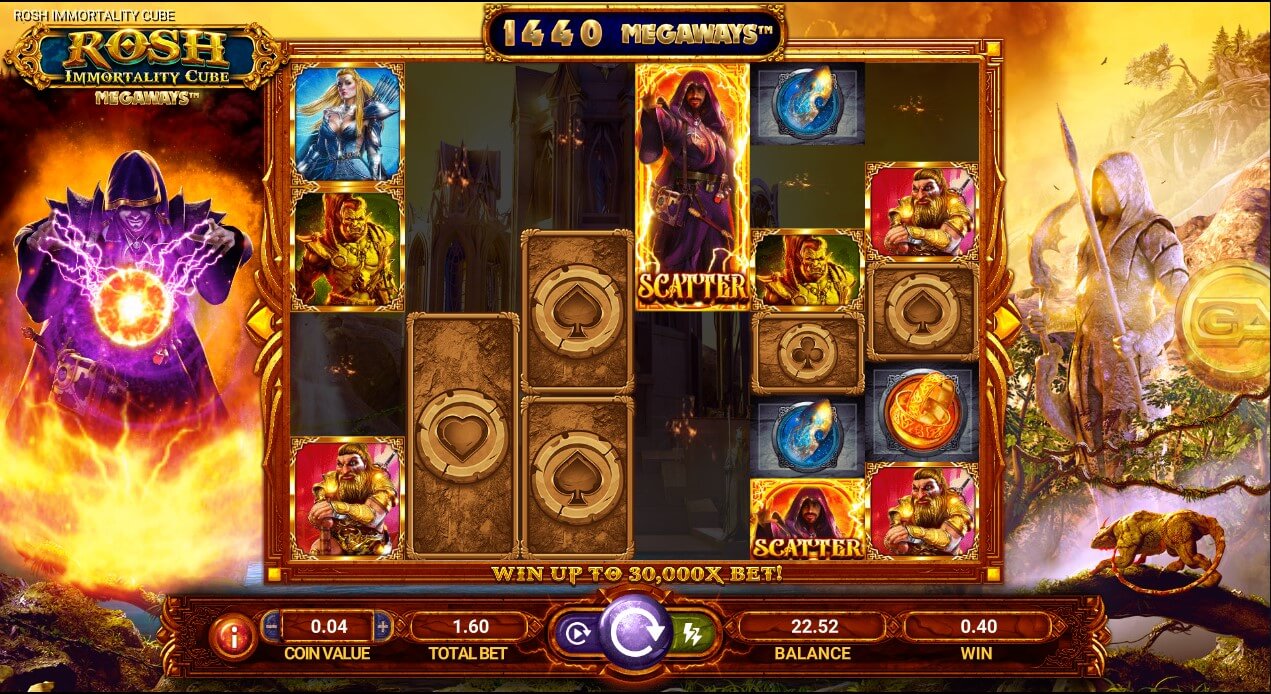 We can’t evade the controversy surrounding Roshtein and that GameArt have been pointed fingers at for not having a Malta Gaming Authority license. All that doesn’t make the present game any less exciting and we hope that things will be placed in the clear soon enough so that players can enjoy the game without having to think whether the above makes any impact on the potential winning outcomes.

Claim a welcome offer for one of the casinos on this page to explore and play Rosh: Immortality Cube slots.