Play GameArt's Wolf Hunt for a chance to win the jackpot prize of 1000x on the winning bet or other smaller, yet significant amounts. The game has 25 paylines, pays on five reels and three rows, and offers a theoretical RTP of 96.10%. Furthermore, there is a free spins bonus with 3x on the wins and colossal symbols, including wilds and scatters. 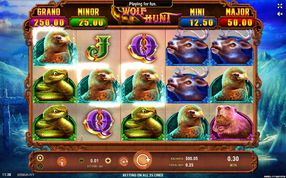 Play the four jackpot Wolf Hunt slots for a chance to win one of these prizes, as well as free spins and base game wins.

Spin the reels to hear the wolves howl on this 25 payline jackpot slot. This GameArt slot is all about the Native American spirit which is embodied by the symbols on the paytable, which are animals of the vast American plains.

Wolf Hunt slot lets you connect a minimum of three matching symbols for a payout, but there is more action besides the base-game wins, such as a free spins bonus, a wild symbol and colossal high-paying symbols.

The defining feature of the game is the Wolf Respins which are triggered with the gold coins which carry cash prizes and can retrigger in the process. This feature is the key to winning the jackpot prize, or at least one of the four such that are available.

The slots experts at GameArt have made a stunning online slot that has a characteristic touch in terms of the graphics design. Even though the game symbols aren't animated they have been drawn and rendered in an impeccable way, and this includes both the animal symbols and the royal cards.

Wolf Hunt slots has been made with attention to details, where even the frame around the reel-set has been treated to a conceptual solution. The game's background is a Native American village, full with teepees and totems, set in front of a cloudy sky and hillocks.

Since the mood has been adequately set, it's time to spin the reels for the potential big wins and this is where the game offers a solid gaming dynamics and a true reel adventure.

How to Play Wolf Hunt Slot

The game starts when you press the big round Spin button, which can be found in the bottom of the reel-set, underneath the middle reel. This button has been placed on the same row with the rest of the game controls and buttons.

Before you make that first spin it would be a smart move to take a look at the total bet.

This amount is displayed in the center-right area in line with the Total Bet label. Above it is the Balance, which lists the current amount in it. Another look to the right and we can see the concurrent win amount.

Wolf Hunt slot lets you change the total bet by selecting a coin size, or Bet Per Line. This is on the left side on the controls area. Press the minus or plus buttons to choose between coin sizes of one penny and £5.00 per the game's 25 paylines.

These amounts reflect bets that start at a quarter of a pound for the smallest bet and £125.00 per spin for the maximum.

You can use the Autoplay option if you want to Wolf Hunt hands free. Press this button to choose the number of automatic spins, the total bet per spin, and there are the optional Loss Limit and Single Win Limit controls.

With this, the game has been set-up for the play and it’s time to check out the symbol payouts so we know what kind of adventure we may be in for.

How to Win Wolf Hunt Slots

The game makes its payouts with three or more symbols which must fall on one or more of the game's 25 paylines. These are always active and can provide more than one opayline win that results from a single spin.

In terms of value, the symbol that we all anticipate to see in fives is the deer. It pays 20x on the winning bet but a win of three of the same isn't quite bad either, as with a bet of 0.50 players can win back the wager.

Next in terms of value is the beaver, which pays 16x on the win for five of the same. The hawk and the snake complete the high-paying symbols category and pay 12x and 8x respectively. The rest are the royal cards which carry values between 2x and 4x on the bet for five of the same.

All of the stated symbols can be substituted by the wild symbol, which is represented by the wolf.

For the bonus we have a free spins feature which is triggered by the scatter symbol stopping on reels one, three and five. In the event, six free spins are given that add 3x on the wins, however, the free spins paytable shows smaller symbol payouts.

Another attribute of this Wolf Hunt bonus feature is the colossal wild symbol which appears on reels two, three and four. If a colossal scatter symbol stops on the reels the game gives three extra spins.

Six golden coins trigger the respin game. In it, the coins carry a random prize that is relative to the bet. Each coin that stops on the reels resets the respins to three. In the end of the feature the prizes are counted on aggregate. The game's grand jackpot is paid when all 15 positions are filled with coins.

GameArt are releasing this slot as a free play demo at online casinos that carry demo slots.

A jackpot game that has a mighty free spins feature. The six free spins may seem few but the game can retrigger the feature with either three scatters or with the colossal scatter. On top of that, all wins pay 3x the bet.

Discover the Wolf Hunt slots by claiming a welcome offer right from this page and play at top notch online casinos.

What are the RTP and Variance on the Wolf Hunt slot?

The game's theoretical return to player percent is 96.10%, which is above the average, while the variance or volatility is medium.

How does the Wolf Run jackpot prize trigger?

The game comes with a coin respin bonus, which grants a cash prize on each coin. During the respins, each coin that stays on the reels resets the number back to three. If the reel-set fills up with golden coins the Wolf Hunt jackpot prizes is awarded.

Other than the coin collect feature, which is the jackpot bonus too, Wolf Hunt can trigger six free spins with a x3 multiplier when three scatters fall on the reel-set. The scatters can only fall on the odd-number reels.