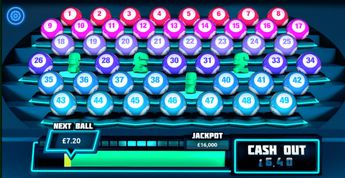 If you want to play video lotto for a chance to win the top jackpot of £800,000 or many smaller prizes, play Boss the Lottogame.

Lotto hasn't been quite part of the repertoire of online casinos, but that is about to change with thanks to the renewed interested in the classical game and its remake titled Boss the Lotto. We don't know about the title, does it mean, the player bosses the lotto, or the lotto game is the boss, but at any rate, let's suppose it is just a way to make it sound cool - and, cool this game is.

After it launches, the first thing that pops up is the screen where the player selects the bet for the game at hand. Because it is a dynamic display, as you select the bet, the amount of the jackpot prize below changes too. In the optimal outcome, a player who deposits just £1.00 stands a chance to claim the top jackpot for that stake, of £4000. So that gives the players an idea how the stakes are laid out.

Next which is of crucial importance, is for the players to have fun picking the lotto numbers, as everything else works the same as with a regular lotto game: select the numbers and wait for the draw. The major difference when you play Boss the Lotto and standard lotto that you play from your neighborhood booth is, this is a digital game that you can play from the comfort of your home, or on the go anywhere where you get internet connection on your mobile.

How to Play Boss the Lotto

Once you have selected the wager and advanced to the game, you will find six tiers of numbers that start at one and end with 49. The gameplay consists of the plauyers selecting numbers from these lotto balls. Each ball that hides a prize will unveil it, and you will see the pound sign spinning in place. With each successful hit, the next ball stands to reveal a bigger prize, and that depends on the bet.

The game has six 'bad balls' out of 49 and hitting one of these will end your hand and with it, it will pull the wager. So the point of the game is to hit as many good balls as possible and avoiding the bad balls at all cost. As for the playing surface, besides the rows of lotto balls that take up much of the screen, the bottom part shows the progress, where the Next Ball window nudges one step to the right when the players hit a good lotto ball.

The progress bar slides to the right, towards the Jackpot prize, and each win will go to the next amount in the Cash Out window. There, the player can view how much money has been made up to that point. If the players deems the prize justifies the wager, then cashing out could be an option. If the challenge is to get as close as possible to the jackpot, then the wager is forgone in favor of the top payout.

As for the design, there is nothing extraordinary or that will blow your mind about the Boss the Lotto game. You will find exactly six rows with lotto balls and each one is more or less a different hue of blue, except the top two which are pink and light red.

The players know when they have hit a prize lotto ball because immediately a pound sign is revealed and goes on to animate the stage because it starts to spin. So it is a welcome sight when there are so many pound signs acting the in the same fashion.

As for keeping track of the game, your wager and the wins, this is done through few displays. At the bottom of the screen are displayed the value of the next lotto ball, the amount the player stands to get from a cash out, and the amount of the jackpot. The ticker above the lotto balls states the current bet and the balance.

How to Win Boss The Lotto

Being a game of chance, rather, a game of guessing right, it's good to know that all winnings are delivered at random. Also it is good to know that the house edge margin is not as wide on the part of the casino as players would think. Out of 49 lotto balls, only six don't progress the game, meaning there are 41 probabilities of hitting the right lotto ball.

Winning the game probably means getting as close as possible to the jackpot pertaining to your wager. The game's ultumate jackpot prize is an unbelievable £800,000. That's almost like a real national lottery jackpot prize. This is available with the highest wager of £200, but even smaller wagers, halway to the max, offer sums that are rather huge.

Thus winning the game requires hitting every single lotto ball, bar the six 'bad' ones. That's an amazing feat, but as your luck unfolds for the better with each turn, you will face the opportunity of collecting the money that you have made thus far. For example, the player's wager is £200 and hits two lotto balls right. then Boss the Lotto will award £240 before opting to go for the third ball or not. Hitting the third will result in the option to cashout with £280, and so on.

As lots of players already know, Boss the Lotto is a brand new lotto game that is even more exciting than waiting for the lotto draw on TV. If you want to test your luck, you can play today by claiming a welcome bonus and finding the game at one of the casinos, right from this page.