Book Of The Ages Slot

Book of the Ages is a slot game which is based on a mysterious old tale where players can win up to £5,000 in the main game. This game can be played with as little as 10p, with all active paylines. 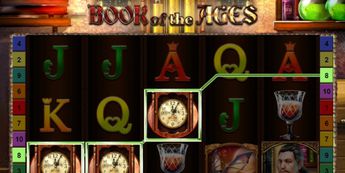 Book Of The Ages Slot Online

Online slots are a relatively new phenomenon, despite the fact that they became immensely popular and are played by millions of people all over the world. However, that doesn’t mean that old and historic themes can’t be used by slots developers. In fact, some of the best and most popular games are based on mysterious and mythical old tales and legends. Book of the Ages slot is one such game.

The game was produced by Bally Wullf in cooperation with their partners Gamomat. Gamomat are a team of German slot developers which has released some quite impressive slots over the years and cooperate with plenty of providers. Book of the Ages slots tell a magical tell of a time long gone. The game is quite enticing, and the symbols look both common, but also quite unusual and unique and that style of design isn’t something easy to achieve.

Book Of The Ages Overview

The designers of Book of the Ages slots kept things simple, the reels take up most of the space on the reels. Above them you will see the slot title, there are a couple of buttons placed in the top left corner, and the main control panel is just below the reels.

On both sides of the reels you will notice numbers from one to ten placed in squares of different colour and these represent the paylines. Book of the Ages slot features ten paylines, and the outline is quite regular with five reels and three rows.

The symbols include both thematic objects, as well as standard card symbols, but even the cards are designed in a way that fits the game theme, and there are handy animations, especially in bonus mode.

How To Play Book Of The Ages

Playing Book of the Ages slot isn’t at all difficult. You can control your stake by adjusting the amount you wager per payline. The minimum amount that you will need to place per line is just one penny, which means that if you play with all active paylines you will need to wager a minimum of 10p. The maximum stake per payline is £10, which sets the overall wager at £100.

But, in the Book of Ages slots you also have the opportunity to decrease the number of active paylines to just five, in which case you will be able to play the game with just 5p. But bear in mind that if you do this and then you get a combination of three symbols on one of the paylines that you have deactivated, you will not be winning anything, as combinations can only be formed on active paylines.

In addition to the lines and the bet buttons, both of which feature a plus and a minus for you to adjust your wager, there’s also a max button that you can click if you wish to wager £100 per payline. Next to the max button, between this button and the play button is the auto play button, and you can choose from ten up to 250 auto play. There are plenty of auto play options, you can set the game to pause after winning a particular amount, or when your balance reaches a certain sum.

In the top left corner there are two additional buttons, one can be used to toggle the sound off and the other will allow you to set the space as a play button, which is very handy if you don’t want to use a mouse.

How To Win Book Of The Ages Slot

If you are fortunate enough to get five top symbols across the reels, you will get £500. In the case when a player wagers the maximum amount of money the winning prize could reach £5,000. In addition to the standard symbols, there is also a wild and a bonus symbol. The wild is a book with the words Book of the Ages written on the cover and it can substitute all symbols except for the bonus.

Book of the Ages Bonus Features

In Book of the Ages slot you can retrigger the free spins if you get three additional book symbols on the reels during one of the free spin games.

In addition to the free spins bonus, Book of the Ages slot also offers a gamble feature which becomes available after every main game win. You have a chance to guess the next card and if you correctly predict the outcome you will double your winnings, otherwise you’ll lose. After a win you can either keep playing, collect your money, or take half of the money and play with the second half. It is totally up to you.

Our Book of the Ages Review

Book of the Ages is a very fun game which can be played with a minimum of 5p. With the gamble feature of have the chance of doubling your winnings every time. And if you’re feeling really lucky you can go for a second attempt and quadruple your winnings. This a medium variance game, which means wins won’t happen neither too often, nor too rarely. If Book of the Ages does sound appealing to you, feel free to register at one of the SlotsWise casinos that offer it and claim your bonus before you start playing.