This game isn't only about a book. It is about the cash prizes that can come from it. Land three, four or five books to get the free spins bonus with a bonus symbol. The top payout is 500x on the bet and there are few other sizeable wins. Gamomat have given us a medium variance and a solid RTP. 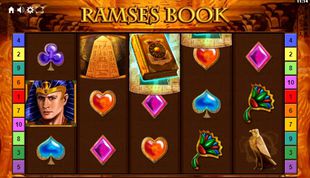 Open the Ramses Book slots and play for a chance to win the top payout of 500x on the winning bet.

Books are a popular subjects in the slots of Ancient Egypt and the one about the Eye of Horus is certainly the most widely read, at least in the world of online casinos. Now we have the Ramses Book slot coming from the Gamomat studio. The book is meant to contain the pharaoh's secrets as well as his most prized possessions that are worth real cash.

The players will find what is a typical Gamomat slot. Besides the familiarity of the reel set and settings, the game is done in the same style as many of their previous releases. But that is beyond the point. Ramses Book comes with three rows, five reels and a total of ten paylines. Conversely, the players can opt to spin of five always-active paylines.

Besides base game wins, the game offers a free spins bonus which comes with a supercharged bonus symbol. Like in other slots by the company, the paytable is dotted with few symbols that pay amounts that are quite decent. Payouts are made with three of the same kind and up to five, and there is a wild to substitute for any given symbol/s.

Design-wise we get the bland-ish layout that is typical for Gamomat, that a slots expert can recognize from afar. The background shows only partially so there isn't much to be seen and there hadn't been much to be done in terms of drawing and rendering. The background on the reels is just a plain, brown solid color.

On the other hand Ramses Book slots has solidly drawn high-paying symbols that include Ramses the pharaoh, his famed book, a row of Anubis statues, a falcon and a lotus flower. The remaining symbols are the cards suits. Winning outcomes treat the symbols to some light and flashes, so that brings a jolt to the gameplay in terms of the visual effect.

A musical theme stays within the confounds of the stereotypical Middle Eastern rhythm and acoustics that is being passed for an Ancient Egyptian theme music.

How to Play Ramses Book Slot

The game can play on five or ten paylines. Players can switch between the two payline modes between any two spins. The button that avails this can be found in the bottom left corner of the screen.

To the left of that button is the dollar sign, which opens up the paytable that displays the symbol payouts and bonus feature information. Then there is the Bet Per Spin setting. Use the minus and plus buttons to select a value for the bet per payline.

Selecting a bet per line on Ramses Book slot will impact the Total Bet amount, which is in turn shown in the black rectangular area. The smallest bet is £0.05 when you play the game on five lines and select one penny for the bet per line.

The biggest bet for a ten payline game is £0.60 per payline which will amount to £6.00 per spin, and this is the game's maximum. In terms of value, the players get a rather sizeable £0.60 per on the bet win on a total bet that really isn't terribly expensive. Of course smaller bets are always available on both ten and five paylines.

To send the reels spinning select the big green button in the bottom right corner. To the left of it is the autoplay button which lets the players select from the automatic spins presets. And to the left of that button is a purple Max Bet button, just don't use it on an impulse.

How to Win Ramses Book Slots

Here is what is always fascinating about the bland, archaic-looking slots by Gamomat. They come with some amazing payouts, even though the maximum bets are rather low compared to any given slot out there.

For example, the game's most valuable symbol is the book - hence the title - as it pays £1200.00 when you land five books on the biggest bet of £6.00 per spin. This symbol is also the Ramses Book slot scatter and wild.

In terms of lucrative value, and not just potential value, the most important symbol is that of Ramses, which pays £3000.00 for the highest bet and a payline win of five symbols - that is 500x on any triggering bet.

Ramses is followed by the obelisk which pays £1200.00 and the symbol of the Anubis statues and the falcon, both paying £450.00.

There is only one bonus game and it's a free spins rounds triggered by the wild/scatter, which is the book.

Three, four or five of this symbol anywhere on the reel-set triggers 10 symbols, which can be retriggered by any of the sequences above. The extra is, there is a bonus symbol which tends to show more frequently on the reels.

This mobile-ready slot has been offered as a free play demo slot by Gamomat so that the players can get a taste of the action before playing with real money.

The feature that defines this game are the payouts and the comparatively low highest bet. You can regard this as a penny slot, enjoy the fun and still play for a chance to win decent pays.