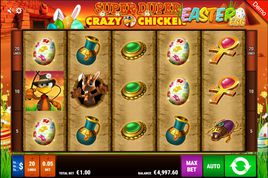 The slots experts at Gamomat sat at a table one day and threw some ideas for a new slot. One group insisted, let's make a farming-themed slot, with chickens, as there haven't been any new such releases lately. And the other group said: no, let's make an Egypth-themed slot, these are awesome, always open the door to the player's imagination! And they squabble for some minutes, until the wisest of them all halted them, saying, no, and exclaiming, we shall make a chicken the head of the workers building the pyramids, and we'll make it one mean chicken with a whip in its hands, and all this will take place at the height of the pagan holiday from which the easter eggs originate. And that is the origin of the Super Duper Crazy Chicken Easter Egg​ slot.

Of course, this anecdotal account is highly disputable, but the potential for winnings aren’t and the game’s fun and engaging and there is a bonus feature involving those bedazzled Easter eggs which cause the high-paying symbols to turn up. So the slots experts have conjured up not just an excellent gameplay on five reels and three rows, but also a gameplay that involves bonus features and excellent prizes. The beautifully bedazzled easter egg is one of the prized symbols of the game, as it triggers one of the bonus features, which causes all eggs to become one of the high-valued symbols.

This wacky reel action affair is serious when it comes to the gameplay. The players can select the number of active paylines in increments of five, so besides the maximum 20, you can also play on 15, 10 and 5. When it comes to the bet, the smallest amount that can be wagered per active payline is just one penny. These amounts can be set from the bottom left corner of the game where you will notice two aptly named buttons, or precisely Lines and Bet.

As for the other available coins sizes for the bet per line, we have just too many values from one, two, three and up to ten pennies per line, all the way to £5.00. This brings out the maximum amount of the total bet to £100 per spin. As for the basic wager, the players can have fun on the Super Duper Crazy Chicken Easter Egg slot for as little as £0.05 - that is five cents per spin, making this one of the best penny slots we have seen.

There are a couple of other buttons on the game. Those players who want to make this a high stakes action can hit the Max Bet button and wager the whole round £100 of the maximum bet per spin. But if that is too much, then selecting the preferred bet and the Auto button lets you set the game to a number of automatic spins of up to 250, with the option to select a win or loss limit.

The paytable button is located in the bottom left corner of the page. It is a blue button in the very corner and this opens up the board where all of the symbol pays are displayed, as well as some other gameplay details pertaining to the bonus feature, the paylines and the game rules.

All of that reel action on 20 lines and a wide selection of bets entails a jumbalaya of symbols that mix Easter and Ancient Egypt. Go figure - and yes we did - it makes perfect sense, because, in the end it's all about the fun, and our slots experts kind of appreciate taking a break from full-blown online slots with diesel animation and the such, and having fun with a theme that makes little sense.

The top payout prize in Super Duper Crazy Chicken Easter Egg slot is a solid 25,000x multiplied by the winning line bet. As for the symbols, the most valuable one is the chicken ringleader, holding a whip in his hand just in case the mummy bunny escapes from the crypt or if the pyramid builders' knees start rattling underneath the multiple ton-heavy blocks that need to be inserted into the stack. This symbol pays the top prize of 25,000 when five matching land on an active line on the highest wager of £100. The next most valuable symbol is the mummy bunny, paying a not too shabby 5000x coins on the line bet. But even if the players play with a more down to earth wager, the prizes are still lucrative. So, playing with £1.00 per bet has the top chicken symbol pay 250x on the line bet.

As for the Super Duper Crazy Chicken Easter Egg slots bonus feature, it involves the easter eggs. Seeing five land on the grid results in those eggs become on of the high-valued symbols, which means, it could be the chick, it could be the bunny or the scarabs or the ankh symbols. That means, bigger and better prizes, since this is the only instance in which the game offers a Wild symbol.

If you are ready to do some work on this imaginary pyramid you can explore the Super Duper Crazy Chicken slot right here, by claiming one of the casino bonuses from this page.