Players are welcome to explore a layout of three rows and five reels that spin across 20 fixed paylines. Winning outcomes are made with three matching symbols of the same kind and the smallest bet is a rather steep 1.25 per spin. Galaxy Stars has a theoretical return to player of 96.00% and the volatility is high. 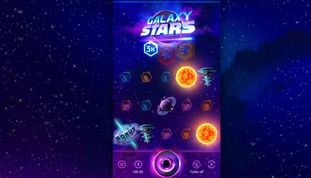 The slots experts at Radi8 have made a galaxy-bound online slot that lets the player explore outer space and potential winning outcomes. The game is set on a purple-indigo void studded with stars, planets and orbs. By all appearances, Galaxy Stars slot looks quite appealing not just to people who are into UFOs and metaphysics.

With a maximum payout potential of 5000x multiplied by the bet, players can play knowing that big wins are possible. Galaxy Stars has an excellent base game but there is also a free spins bonus that can trigger wins with either one of the three multipliers. Overall, the game looks very interesting and has much to offer.

In terms of graphic design, the slots experts at Radi8 are taking us into a wormhole that is filled with exciting events. The reel set is in constant motion. Whether it is the black hole above that is spinning up multipliers or the symbols themselves, playing Galaxy Stars slots is engaging and dynamic.

There are low-paying and high-paying symbol categories. The latter are represented by several planets and circuit modules, while the latter consists of a spacecraft, a spiral-shaped space station and the wild symbol. Each one of the high-paying symbols springs into motion when they become part of a winning outcome.

Also, the musical theme of Galaxy Stars slot is nothing short of amazing, as it sucks you inside the nexus where playing feels as comfy as levitating in a zero-G environment.

How to Play Galaxy Stars Slot

The game can begin with the push of the spin button which is a black hole located in the bottom-center area of the reel set. Pressing that button once causes the reels to spin one time. The game deducts the active bet one time from the balance.

Before you make any spins from the get-go, make sure that the default bet isn't an amount that you wouldn't want to play at the start. The second circular button on the left side of the Spin button shows the active bet. To change it press the poker chip and select between 1.25 per spin to all the way up to 500.00.

Players should not that the bet amounts in our Galaxy Stars review may be different at online casinos, so the smallest bet may be a lot more affordable, possibly at one penny per payline or 20p per spin.

Another way to play Galaxy Stars slot is to select the autoplay mode. This is posible by pressing the circular play button in the bottom right corner. From the menu, select the number of automatic spins from the presets and add an optional setting for Loss Limit and Single Win Limit.

Last but not least, the menu button leads to the setting for sound and music and the thunder button enables players to play Galaxy Stars in turbo mode, which means the spins are faster.

How to Win Galaxy Stars Slots

Winning outcomes in this game are made with three or more matching symbols. The payouts need to occur on one of the 20 paylines, but it is also quite possible for the game to create payouts on more than one payline.

In terms of payouts, Galaxy Stars slot has few high-paying symbols. the most valuable symbol, however, is the blazing sun. Five matching symbols on a payline result in a win of 500x multiplied by the payline bet.

The values on the paytale can receive significant boost from the multipliers, which are part of the extra features. Any win of three, four and five matching symbols can result in multipliers between 3x, 5x and 8x, but only on the subsequent spin as the preceding one just loads the multiplier.

There is a free spins bonus that is triggered with three scatter symbols. The player gets 10 free spins and all wilds become Blazing Wilds, which are sticky and walk from right to left with each spin.

Lucky Stars are random wild symbols that can land on the reels during the base game in order to improve the eventual payouts.

The game is available as a free play demo, as it was released by Genesys Gaming and Radi8. This enables players to try the game and its features with free credits.

A massive maximum payout potential of 5000x plus free spins, walking wilds and multipliers can be enough for a thrilling adventure on the reels. The fact that the graphics are super nice is an added bonus.

Discover the Galaxy Stars slots by claiming a welcome offer right from this page and play at top rated online casinos.