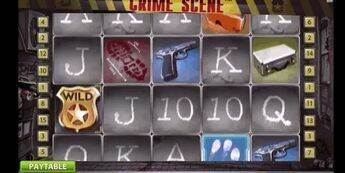 Crime/detective shows are one of the most popular TV genres, especially in the past few years. Plenty of films and series with this particular theme have been released and some of them have a cult following. It is difficult to imagine the current pop culture without shows and films that show us the other side of crime and depict the lives of busy police detectives and investigators.Traces of Evidence slot is a game based on that exact theme, it depicts different pieces of evidence that can help the detectives solve the case. As a player, your goal is to solve your case, which is to hit a jackpot, or at least a massive win.

Traces of Evidence slot is developed by Genii and it was released at the beginning of May in 2018. In the period immediately after its release, Traces of Evidence slot managed to capture the attention of slots fans across the world, thank to its great graphic features, as well as the interesting theme.
The reels are set against a crime scene background where you can see a car and a cop with the words ‘Traces of Evidence’ written on a yellow track above the reels. The reels spins look like animations, and the symbols are quite realistic and playful.
You will see a corpse in a morgue, a blood-stained gun, bullets, fingerprints, and everything else that you can see in an investigation film. Even the card symbols that are used are stylised to fit to the main theme. It is a nicely done game, with impeccable graphics. You will even see the phrase ‘Good Luck!’ written below the reels.

How To Play Traces Of Evidence

All the buttons in Traces of Evidence are located below the reels. You will see the spin button just below the rightmost reel and to the left you will notice the three buttons that allow you to control your wager. You can set the number of coins you wager per payout, the coin size and the paylines.
You may play with as little as one coin per line and up to a maximum of five coins. When it comes to coin size, it starts at one penny and it goes up to a maximum of 25p and you can also choose how many paylines you wish to activate, you can play with just one active payline or any number from one to forty.
Your overall stake is determined by these three parameters. So, if you play with 1p coins and you wager one coin per line your total stake per spin will be 40p. If you increase your coin size to 5p, your wager will reach £2, and if you increase the number of coins to two per payline your stake would be 80p.
This game is also available in full screen mode, so if you want to have a better view of the reels and all the symbols that appear on them, you can activate it.

How To Win Traces of Evidence Slot

You will need at least three symbols across an active payline for a win. If you play with all active paylines then any combination on any payline will award a cash prize, otherwise, if you have disabled some of the paylines you wouldn’t receive a payout if you get symbols on those lines. The scatters pay regardless of the respective symbols’ positions on the reels. All wins as given in the paytable are multiplied by the wagered coins per line, whereas the scatter wins are multiplied by the total number of coins.
There are eight standard and four special symbols in Traces of Evidence slot. First, we have the standard card symbols which pay from four up to 14 symbols for a combination of three same symbols across a payline, whereas for five equal cards you can get from 20 up to 50 coins.
Next, we have the face match, the bullets, the dead body and the blood-stained gun. You will get a minimum of 20 coins and a maximum of 40 for three same symbols, but if you get four or five guns you are in for some serious treats, as four such symbols pay 300 coins, whereas five pay tenfold – 3,000 coins. This game also features a wild symbol which can replace all standard symbols, but not the scatters.

Traces of Evidence slot features three scatter symbols. The first one, a yellow police line pays a cash win starting from a prize that’s double your stake for three symbols, eight times your stake for four symbols and up to twenty times your wager for five symbols. If you win any other prizes and the scatter win, both are paid out.

Our Traces of Evidence Review

If you are a fan of crime/investigation TV series and movies you will definitely enjoy playing Traces of Evidence, and even you’re not particularly fond of this type of programmes, you will still like how this game is done and all its features.
The game is available on desktop computers, but it also mobile optimised and it can be played on smartphones and tablets. Genii have not yet released the Traces of Evidence RTP figure, but we are certain, that it will be published soon. Many of the SlotsWise casinos included Traces of Evidence to their list of available slots, so if you feel like playing it, register, then claim your bonus and start playing.