Discover the auspicious 88 number allover this Habanero Gaming slot, which as a top symbol payout of 88x on the winning bet. The reel adventure unfolds on a grid of 5x6 with three to six symbol payouts that can occur anywhere on the rows and reels. A free spins bonus comes with two wild symbols on each spin and the theoretical RTP is 98.05% 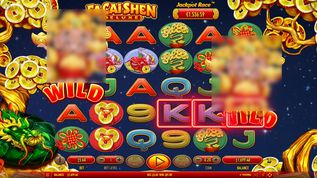 Cai Shen is a mythological figure in China who has been celebrated through the centuries as a deity of wealth and fortune. Habanero Gaming have taken this symbol and turned it into a jolly man who cheers you on as you land the winning outcomes on the Fa Cai Shen Deluxe slot.

The game has a reel-set that you don't get to see too often in the world of online slots. The layout of five rows and six reels has a total of zero paylines, but that is only because the payout mechanism allows win outcomes of three or more machining symbols on horizontal and vertical rows.

What's amazing for the Fa Cai Shen online slot is that the win outcomes mustn't necessarily start on the leftmost reel, as they work anywhere on the grid, as long as they show on a row uninterrupted.

Besides the exciting action in the base game, there are extra features that can spice up you adventure on the slot at hand. Find out more about it in continuation of our review.

The slots experts at Habanero Gaming have created an excellent game with lots of moving parts. The theme itself has allowed enough ground for interpretation and thankfully, the slots experts responsible for the Fa Cai Shen Deluxe slots did not bother sticking to the basics.

Even though the theme is familiar, and the symbols, all of it has been given a fresh and vibrant look. Especially pleasing in terms of the visual experience is the Caishen character who bobs and dances to celebrate the wins. The golden ergots are held in each hand and each win outcome is marked by lights and golden numbers.

There is a musical theme that fits the gameplay and the theme, too, and it is fun to play with it on for a while.

The game starts with the push of the play button which can be found underneath the reel-set in the bottom-center area. Press this button once to have the reels spin once.

To configure the bet per spin you need to choose a coin value and a bet level. The default level on Fa Cai Shen Deluxe slot is one. That means, the coin value as extrapolated across the the default number of paylines, gives the total bet.

Fa Cai Shen has an autoplay mode that offers advanced options that let the players configure the rounds with more controls. Besides choosing the number of automatic spins, there is the option to add a balance decrease amount, a single win limit and a stop if or when the bonus feature triggers.

Once ready to start this mode, press the button to the right of play, set the settings and press Start Auto Play. Ti view the paytable and the game rules select the 'i' button in the bottom left.

That Habanero Gaming pay close attention to detail can be seen from the game's payouts. One of the two most lucrative symbols on the paytable is the golden ergot.

The paytable is dynamic and shows the potential payouts in currency, but do the math and find out the multiplier win, and for the best outcome of six matching ergots, it is 88x on the bet.

Those who have picked through the basics of the Chinese mythology would know that this is an auspicious number in china, and other symbol payouts have it to the number too. For example, the dragon symbol pays £28.88 for six, when the winning bet is £0.28 or one penny to the first level.

The three golden coins pay £8.88 for five of the same, and so on, all in the sign of Fa Cai Shen Deluxe slot.

Besides being one of the most anticipated payout symbols, the sycee/ergot symbol is also the bonus/scatter. Three of these falling anywhere on the reels trigger eight spins. Four trigger 18. Five trigger 28 and six trigger that auspicious, lucky number in China, 88 free spins.

What is more, the wild symbol will appear twice on the reels with each turn, but never on adjacent reels.

What is more, during the free spins, between three and 24 of the game’s symbols change into the same random symbol which belongs to the high-paying symbols class. The sycee doesn't appear in the free spins, so the feature can't get a retrigger.

The slots experts at Habanero Gaming have released this game as a free play demo, which means, players can try it and play to get a feel for it with free credits.

The game has a very high exposure, and serious win potentials thanks to the free spins bonus where two wilds are a must on every spin. Base game wins are another story, but the payouts can amount to something thanks to the wild again.

Discover the Fa Cai Shen Deluxe slots by claiming a welcome offer right from this page and play at top notch online casinos.