Payouts on Knockout Football Rush are made with three matching symbols and there is the possibility of more than a single win outcome that results from the same spin. Wilds are also available to substitute for any of the standard symbols, and there are multipliers of up to 60x on the winning bet. 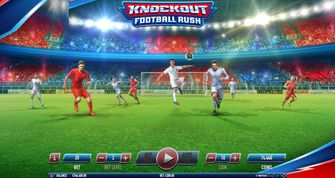 Habanero System are another company that's jumping on the football fever surrounding a European event that is truly global as well: the Euro football championship 2020. This excellent three-reel slot remains, but the Euro itself has been postponed to 2021 for all the obvious reasons.

On the other hand, the Knockout Football Rush slot may have come just at the right time. The impossibility to play football during the coronavirus period may inspire some players to take on all the video-enabled gaming that's possible. Here you don't control any players, but the gameplay is still able to pull out some trick wins.

The graphics design doesn't pretend to mimic the game of football, but it does present iconography of the world's most popular competitive sport. The symbols are a football, a pair of gloves, a whistle, a pair of boots, a football pitch and so on.

Each win outcome is marked by an animated flash on the screen, involving the objects. The football bounces, the whistle blows, and so on. The sound score has been deployed to bring the excitement and cheer of a football match, making the Knockout Football Rush slots a complete slots experience.

This football slots adventure can begin with the push of the play button, which is the red, round one underneath the middle reel. To the sides are the game controls and additional buttons.

It seems like Knockout Football Rush slot offers a range that begins with 20p but ends with up to £200.00 per spin, with many choices to take on the game as a low, medium and high stakes slot.

If you want to take on it without making manual inputs, press the Autoplay button and choose from the automatic spins number presets. You can add optional conditions that can stop the autoplay mode in order to watch your balance spend.

The total bet amount is displayed in the bottom of the reel-set, below the controls and the current balance is shown in the bottom right.

The game makes its payouts with three matching symbols. These can occur on any of the game's ways, but they have to start from the left reel and move horizontally and diagonally.

The wild symbol substitutes for any of the standard symbols. One caveat is that the wild can stop on the bottom row only, but the kicker is that stays on the reel-set for the next two rounds, as it moves up one row with each spin.

The game wouldn't amount to much without the wild symbol. It is the most anticipated and most valuable one for one major reason.

Knockout Football Rush has the ability to post it on the entire reel-set, which is nine positions. If the wild stops on up to five positions, the multiplier on the wins is double.

The wilds covering between six and eight positions produces a not too bad multiplier of 4x the win, however, the lucky players who get the reels canvassed in the wild will get the max multiplier of 60x multiplied by the winning bet.

This is a random feature where you are in the role of a striker who is at the white spot, 11 meters away from the goal line. Then you get to choose where to kick the ball. If you hit it right you score wins. A missed shot takes you back to the game. This is another possibility to win the maximum multiplier of 60x.

Habanero Systems are known for releasing their online slots as free play demos. These are made available at online casinos that host demo slots. You can discover this game at a number of casinos that have been reviewed by our slots experts.

With a payout potential of up to 14,400x multiplied by the winning bet, this seemingly simple game has a lot going on. Two features make things even more exciting but also notable is the varying theoretical return to player.

If this number really matters to you, you can check out the game information at the respective casino to ensure you get a relatively good RTP. At any rate, the default and one you would find most frequently is above 96.00%

Discover the Knockout Football Rush slots by claiming a welcome offer right from this page and play at top rated online casinos.