The symbols on Techno Tumble are marbles with different geometric symbols on them. Those that match in color and symbol kind can make winning outcomes when they touch and every tumble can result in up to 44 symbols landing on the platform. The maximum payout potential is huge, the variance high and RTP % is above average. 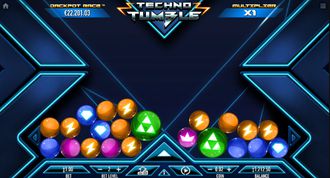 Habanero Gaming has created something previously unseen. It is an online slot alright, but it doesn't appear to be your typical 3x5 layout. For that matter, any of the various styles of slot games look conventional in comparison to Techno Tumble slot. And why is that? The game doesn't have a layout, and that's just for starters.

What is more, this is a cascading wins mechanism, so any winning outcomes are removed from the platform (reel-set) and a new set comes down to contribute to the possibility of a new win. Each consecutive win gets a multiplier and at the start of each new round, the multiplier resets back to 1x.

There is of course more to go over regarding Techno Tumble, so we'll give you all scoops necessary to enjoy this marble drop game.

In terms of graphic design, the game represents some sort of a vacuum chamber in outer space. The playing field is surrounded by neon-edged borders and the bottom of the screen where the settings are located appears like the controls board of a small and minimalist spacecraft.

Techno Tumble slots has a graphic design that is pretty cool, but the way in which the game flows is perfect also. Each drop results in a bunch of marbles filling the pod of the platform. Sometimes it appears that there is a handful of marbles, sometimes a whole lot more.

The sound design is exceptional. What starts as an edgy ambient track develops into a tumping 4x4 with beautiful soundscapes and the 'Ohs' and 'Tas' that emerge when the marbles fall in their place.

How to Play Techno Tumble Slot

Don't look for a spin button because you aren't going to find the symbol that is normally associated with it (either an arrow or the play sign). Nevertheless, the button that sets the marbles in motion is centrally placed and is in the shape of a triangle.

All other buttons and displays are below it. Below and to the left is the button for Max Bet in the form of two stacks of coins and an arrow pointing upward. It's best to avoid it unless you are serious about spending an exorbitant £125.00 per spin.

To change the bet, refer to the window in the left area at the bottom where it says Coin. The minus and plus buttons scroll through the available coin values which reflect on the total bet sum, which is shown in the bottom left corner.

The smallest bet in Techno Tumble slot is 25p per spin for one penny per bet. The Bet Level raises the amount of the bet through ten levels. Each level multiplies the Bet amount by the number that's selected.

One way to enjoy Techno Tumble is by opting for the Autoplay mode. Press the button that is to the bottom and right of the Play button. Choose the number of automatic spins, add optional controls and go in space with the music and for the potential big win.

How to Win Techno Tumble Slots

Although the platform appears a jumble of marbles once they settle down, the payouts are deducted according to kind. There is a wild symbol that can help winning outcomes by substituting for the standard paying symbols.

The wild is a red marble with a star in it and the scatter is a green marble with three triangles. In terms of payouts most valuable symbol in the game is the blue marble. Ten of these equal 18x, nine equal 9.6x, six pay 0.8x, all amounts multiplied by the winning bet.

The orange and purple marbles pay smaller amounts, with the former about half-way less compared to the blue marble. The purple symbol makes payouts that verge on minor paying symbols. Another set of three marbles, of the same color but showing three different symbols, can contribute to payouts too.

The cap on Techno Tumble slot regarding the payout amount is 2,000,000x multiplied by the bet level.

There is only one bonus feature and serious win multiplier potential. The first part of that sentence involves eight free spins that are triggered with three green marbles landing anywhere in the thicket of marbles.

Additional four free spins are given for each extra marble that shows with the triggering outcome. Unfortunately, once the free spins commence, Techno Tumble can not retrigger the bonus.

Habanero Gaming are the slots experts that release all of their games as free play demo slots. They can be discovered at online casinos that host slots in practice play mode and we have those casinos reviewed and primed with a welcome bonus right from this page.

So it is an unconventional game, but one that can get any player settled in dynamic gameplay. The payouts can come to fruition with the help of the multipliers, so one good spin can result in a potential big win.

Discover the Techno Tumble slots by claiming a welcome offer right from this page and play at top-rated online casinos.