Get ready to kick up the excitement in this IGT's football-themed online slot!

Supreme Football slot is a football-themed game from IGT which plays across five reels and fifteenpaylines. It comes with three jackpots and boasts a top payout of £90,000. When playing Supreme Football, you have the option to bet as little as 1p and as much as £150 per spin. You’ll have the chance to enjoy the closest thing to an exciting World Championship on the reels.

When unlocking the bonus features, which include a free-spins round and a bonus game, you can receive a decent number of free spins and score as many goals as you can in return for cash rewards. Supreme Football slot advertises a variable RTP percentage between 91.77% and 95.89%.

As stated in the opening section, Supreme Football from IGT is a football-themed online slot which is noticeable as soon as you open the game. It is played across five-reel, 15-paylineset with a couple of bonus features. These bonus features include a Free Spins round and a Click-Me bonus game.

Everything in the game follows the theme with the reel set placed against a background depicting a football pitch and the game logo below the reels. On the sides of the reels, you can find the numbers for the activepaylines. At the bottom of the screen is where you can find all buttons needed for operating the game.

How To Play Supreme Football

Supreme Football slot is a very straightforward and easy-to-play game since all buttons are placed at the bottom of the screen.

Before spinning the reel set of Supreme Football, you need to set your total stake for the spin. This is done by setting the values for the “Credit/Line" variable and the "Lines" variable.

Next is the ‘Lines’ variable where you can select anywhere between one and 15 activepaylinesto play your bet across.

Once you have selected your total bet for the spins, you can set off the reel set of Supreme Football slots by pressing the yellow ‘SPIN’ button in the bottom right corner of the screen.

If you are not too keen on pressing ‘Spin’ after each spin, you can always go for the autoplay feature the game offers. By pressing the “AUTOPLAY” on the right of the “SPIN” button, you can select a certain number of rounds to be played automatically. Once you make your selection, the reels start spinning automatically for the selected number. You can stop the AUTOPLAY mode at any given time by pressing the “Stop” button. 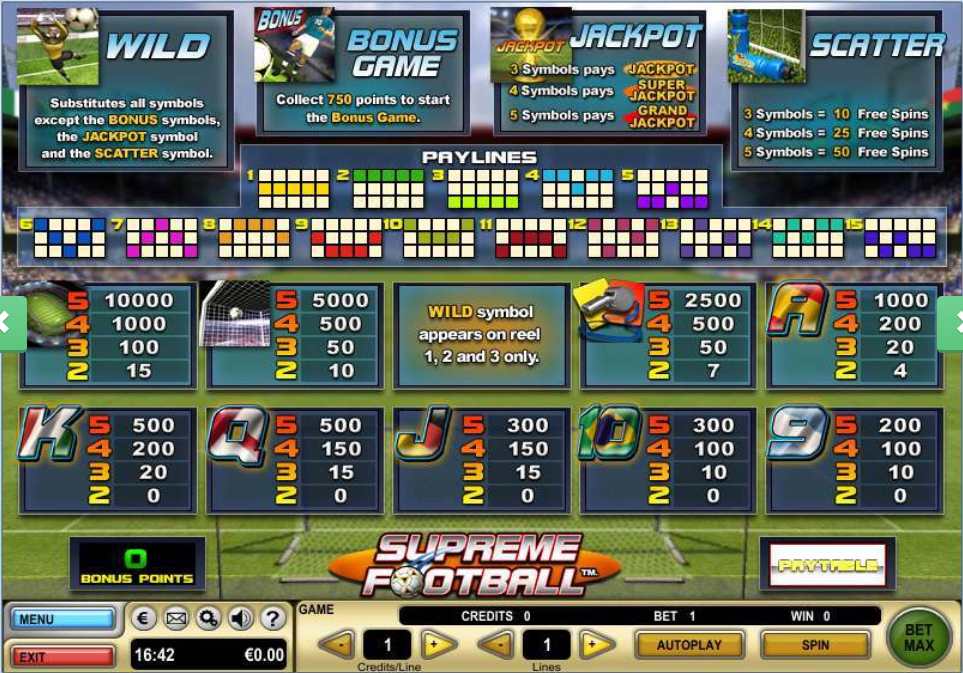 How To Win Supreme Football Slots

The Jackpot symbol can get you one of the three jackpots titled JACKPOT, SUPER JACKPOT and GRAND JACKPOT.

The free spins round in Supreme Football is triggered by landing at least three of the water bottles scatter symbols anywhere in sight. Depending on the number of triggering symbols you can get one of the following:

So, as you can see, the free spins round can get you more play time by awarding you free spins which means you get more for your money.

The highlight of Supreme Football slot is the Bonus Game which is awarded when you accumulate 750 points or more. You’ll get one point for every line and every credit for a played line each time the Bonus Symbol appears on the reel set. The aim of this bonus game is to score as many goals as possible from five attempts. Select one of the positions shown in the goal to kick the ball. If the goalkeeper saves any of your shots, the bonus round ends.

Supreme Football slot is an online game that no fan of football should miss. Aside from the excellent design, the game offers very good bonus features that can get you more for your money. To top it off, you can win prizes of up to £90,000 and three progressive jackpots.

Try Supreme Football today and don’t forget to claim your welcome offer from one of the sites promoted on SlotsWise!