Spin the five reels of The 100000 Pyramid slot for the chance to land a 100,000 coin jackpot! This IGT game is based on the popular US quiz show and everything in it is on-theme! Besides the base game wins, you could benefit from the Winner's Circle bonus round. It could get you a decent number of free spins with a maximum multiplier of 9x! So, claim your welcome offer from the casinos promoted here at Slotswise and spin for the chance to win big on The 100,000 Pyramid slot!

Based on one of America’s most popular quiz shows, IGT’s The 100000 Pyramid slot plays over five reels and 15 paylines. What makes this slot attractive is its jackpot prize which has six figures. The 100000 Pyramid is one of the rare online slots which are not progressive jackpots but offer a generous 100,000-coin jackpot. Playable from 15p up to £450 per spin, you can win up to 36 free spins with a 9x multiplier.

As soon as you launch The 100,000 Pyramid slot, you can see that the reels take the central part of the screen. They are placed against a background representing the quiz show studio with the game logo at the top of the reels. The rea below the reels is reserved for the game buttons as well as for the win and balance displays.

Everything in The 100000 Pyramid is designed on-theme, so don’t be surprised if you hear the quiz theme song when you spin the reels. 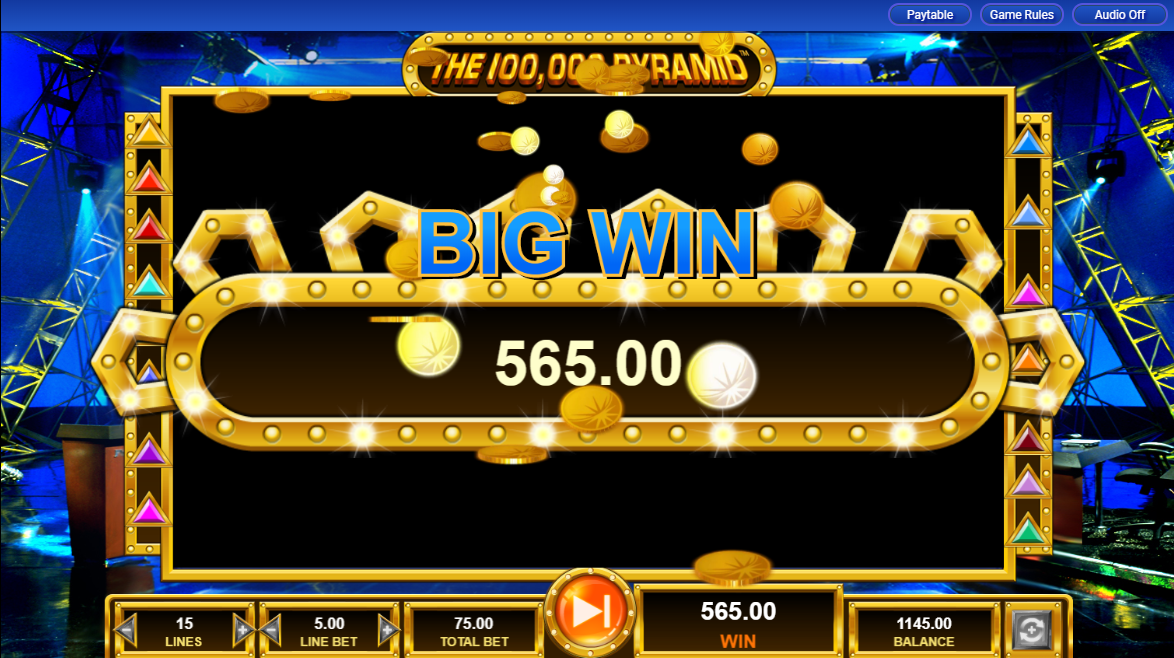 All symbols in The 100000 Pyramid are taken directly from the quiz or have a certain quiz-show twist. They are split into groups of low values and high values. The group of low-value symbols includes the five standard playing card symbols 10, J, Q, K and A. Each of them awards certain payouts for combinations of three, four and five matching symbols on an active payline.

The group of high values consists of the Contestants logo, the Celebrity Star logo, a pile of gold bars, Mystery and The 100,000 Pyramid game logo. All five award payouts for combinations of two, three, four and five matching symbols on an active payline. As you could expect, The 100,000 Pyramid logo is the highest paying symbol in the game if you’re lucky enough to land five such symbols.

The 100,000 Pyramid Logo is also the Wild and substitutes for all symbols, except the scatter. The  Winner's Circle logo is the game scatter and the key to the Winner's Circle Bonus round.

There is nothing complex about playing The 100,000 Pyramid because everything in the game is marked well.

The 100000 Pyramid slot has an autoplay option that lets you spin the reels automatically for a pre-set number of rounds. When you press the autoplay button in the bottom right corner of the screen, a menu opens with several options for the number of rounds. You can select 10, 20, 30, 40 or 50 rounds to be played automatically. However, you should set your total bet beforehand because the reels start spinning as soon as you make your selection.

We would recommend you spin at least 100 rounds on the free play with a different total bet. Start with the lowest total bet and make your way to the highest total bet possible. This gives you the chance to see how the slot reacts to different stakes and how much it pays.

Once you’ve tried all options in the free play, you should move to the real-money version of The 100000 Pyramid slot.

As we have already mentioned in the previous sections, payouts in The 100000 Pyramid slot are awarded for combinations of matching symbols. The amount that you win depends on the symbol that you land and its number. The low-value symbols will get you smaller payouts, while the high-value symbols will award you much higher payouts.

The highest-paying symbol in the game is The 100,000 Pyramid game logo which will get you a 100,000 coin jackpot if land five of them. However, this is not the only way to land a win because the bonus feature could also get you some hefty awards.

The Winner’s Circle bonus is triggered when you land three or more of The Winner’s Circle scatters on the reels. When this happens, you start with two free spins and a multiplier of 1x. Next, you need to make five picks, each of which will reveal either an increased multiplier or additional free spins. However, you can also pick an advance arrow, which takes you to the next level, or you can reveal an extra pick. If you trigger this bonus feature with four or five scatters, you’ll have more advance arrows and extra picks.

In theory, you could win up to 36 free spins with the maximum multiplier of 9x. Once your picks end, you are taken to the Free Spins bonus feature. The free spins that you win are played on an enhanced reel set along with the earned multiplier. The only negative thing about the feature is that it can’t be re-triggered.

As we have already stated in the previous paragraphs, The 100000 Pyramid slot has an RTP between 92.78% in the base game to 95.03% in the bonus game. This is a tad below the industry average, but it’s not the worst RTP we have seen.

When it comes to the variance of The 100,000 Pyramid slot, it stands at a medium to a high level, so it will pay out mostly moderate amounts. However, if you’re lucky enough to land combinations of high-paying symbols, the payouts will be much bigger.

The 100,000 Pyramid is a classic-looking slot coming from IGT. It is a medium-high variance online slot that could get you a maximum win of 100,000 coins.

So, claim your welcome bonus from the casinos promoted here at Slotswise and spin the reels of The 100,000 Pyramid for the chance to win big!