Take a trip to medieval England with White Knight slot from INGG. White Knight is a five-reel, three-row and twenty-payline online slot which comes with two progressive jackpots. Playable from  £0.20 up to £500.00, you can benefit from such bonus features as free spins and wild exchange. With an RTP of a solid 95% and a wide bet range, White Knight caters to different kinds of players. So, claim your welcome offer from those promoted at Slotswise and spin for the chance to win big on White Knight! 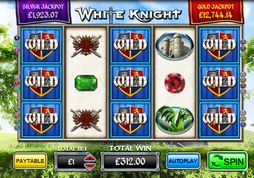 If Medieval England sounds like a place you’d like to visit and enjoy listening to stories of knights, princesses, queens, kings and medieval battles, then you’d definitely fancy INGG's White Knight slot. This progressive online slot has TWO jackpots and plays with 20 paylines, launched towards the end of 2013. Inspired Gaming is the name of the company that created White Knight, besides producing a lot of other online slots, as well as land-based slot machines.

White Knight slot layout is standard with five reels, three rows, and 20 paylines. Visually it isn’t too advanced but bear in mind that it is a game from 2013. You will notice the green, green grass of home behind the reels. Also, you will notice the distinct medieval font used on all inscriptions, both on the symbols and above the reels. The game offers two great jackpots, a silver and a gold jackpot and each of them is awarded independently of the other.

If you like the sound of dragons, knights in shining armours, crowns, flags and a matching thematic soundtrack, then you will enjoy playing White Knight. The developers of this game took a rather straightforward theme and developed a pretty straightforward game which includes all features that a player expects from a medieval-themed game.

All symbols in White Knight are on-theme, so you will not find any standard playing card symbols. The group of low values include two gem symbols, a coat of arms with two crossed swords and a crown. All four symbols award certain payouts for combinations of three, four and five matching symbols on a payline.

The four high-value symbols include a hawk, a green dragon, a castle and the White Knight game logo. As with the low-value symbols, they also award payouts for combinations of three, four and five identical symbols. 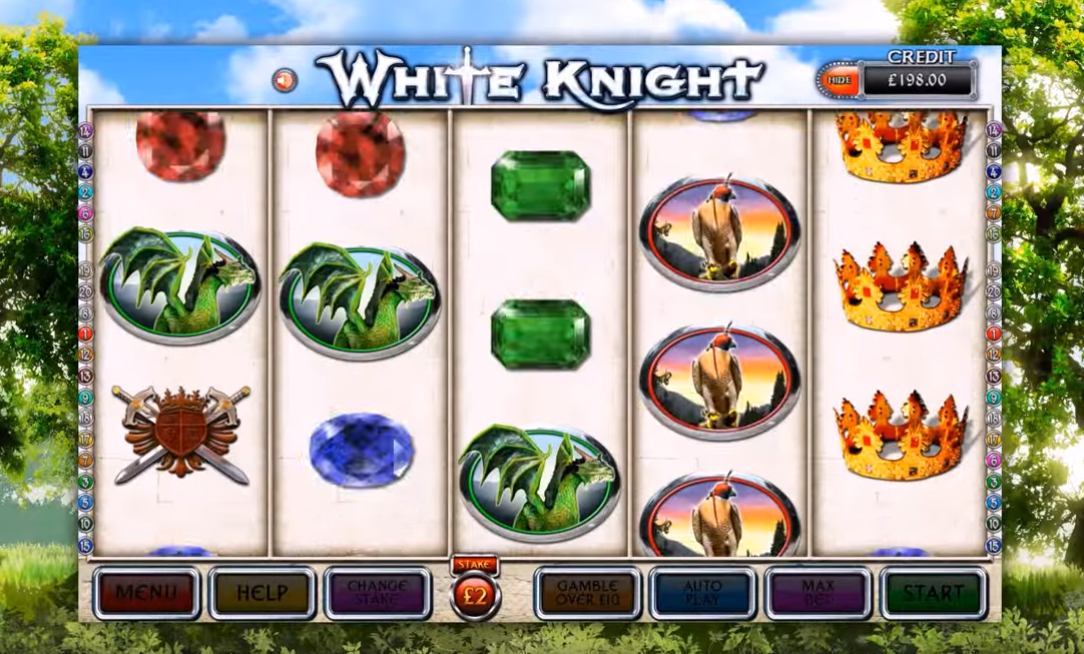 How To Play White Knight

The first thing that you’ll need to determine before your White Knight slot gaming session is how much you wish to wager, as it is the case with any game. Remember that you can adjust your wager, increase or decrease it according to your preferences and/or your strategy. This game has 20 paylines and all paylines are always active.

The initial stake per line is one penny, but the total bet button only allows you to adjust the overall stake and not the amount that you wager per payline. You can increase the stake up to a maximum of £500, which means that the maximum that you can wager per payline is £25. White Knight is a game which offers great flexibility, it is suitable both for beginners who make smaller wagers and for more experience high rollers who are willing to take a larger risk.

In addition to the standard spin button that you need to click when you wish to spin the reels, there’s also an autoplay button which can be used if you wish to set the reels to spin and lay back. This is very handy if you don’t like the idea of having to click a button before every spin. Remember that if you click the autoplay, the same amount will be staked on every spin, until you stop the autoplay or the selected number of spins are played through.

On either side of the reels, you will notice numbers and these numbers represent the paylines. Above the reels, you’ll see the help and the options buttons and there’s also a mute button if you don’t wish to hear any game sounds while playing. The silver and the gold jackpot amounts are shown above the reels on the left and on the right respectively.

If you want to try the gameplay of White Knight before making any deposits, then you should find its free-play version. This version of the slot is almost identical to the original with only a single difference. You can set your bet, spin the reels, land wins and trigger the bonus features, but you can’t withdraw any eventual wins. This is due to the fact that you’re playing with virtual funds.

How To Win White Knight

White Knight slot features eight standard symbols, plus a wild and bonus symbols. There are gems which are the least valuable symbols in this game. Three gems pay ten coins, four gems activate a 20-coin payout and five coins across a payline will give you a 100-coin prize. Then there are two swords, and some other symbols, but the two most valuable standard symbols are the castle and the White Knight logo on a purple background.

If you hit five castles on a payline you will get 300 coins, whereas for five White Knight symbols you will be awarded 500 coins. This is the highest jackpot that can be won in the main game but remember that White Knight slot also features two special jackpots, plus there are big prizes to be won in the bonus games. The shield plays the role of a wild symbol and it can replace any other symbol, except for the jackpot icons. 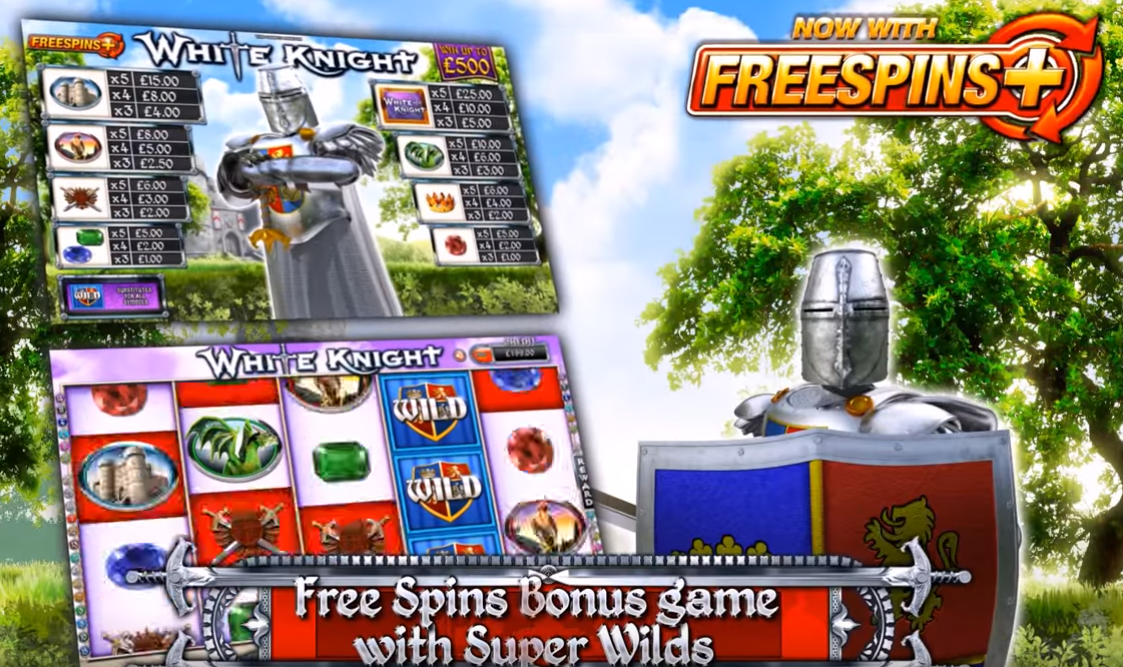 The Free Spins is the first bonus feature that you can activate. If you get at least three free spins scatters anywhere on the reels you will be awarded a number of free spins which may vary. When the Free Spins mode is active you will see a grid that matches the reel layout and every time there is a symbol on the red tile, one position on the alternative grid is filled and once all positions are taken, that will be the end of the White Knight slot free spins game.

The Wild Exchange is a random bonus that is activated in the main game, and it causes all instances of a particular symbol to become wilds during the following spin.

As we have said earlier, White Knight slot is a progressive jackpot with two available jackpot prizes – silver and gold. The Silver jackpot is activated by five silver jackpot symbols which appear on the reels during the main game. The Gold jackpot, on the other hand, can only be activated during the Free Spins bonus, again by at least five gold jackpot symbols anywhere on the reels.

White Knight slot has an RTP of a solid 95%. This a percentage below what’s considered an average, but that’s not that bad considering that it is a progressive jackpot.

White Knight slot is an amusing game with a well-developed story and an interesting theme that can catch the attention of every player, especially those of you who are into history and particular medieval English history.

The Gold and the Silver jackpots are the main targets for any player, but even if you don’t manage to hit either of them, there are plenty of other great prizes that can be activated. The game’s RTP is 95.00%, and while there are games with better return rates, it’s still not bad.

If this game sounds like a slot that you’d like to try, join one of the casinos featured on Slotswise, claim your welcome offer and start spinning!